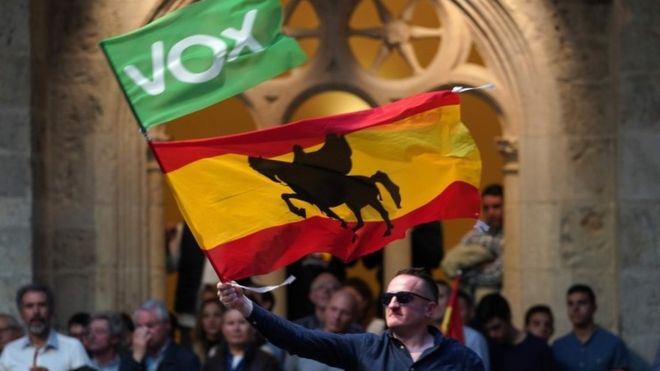 According to the European Islamophobia Report, which I have been co-editing since 2015, Spain consistently ranks amongst the least Islamophobic countries in Europe. The VOX party may change that.

Following this year’s second national election in Spain, the Washington Post’s Anne Applebaum presented an insightful portrait of the rising radical right-wing political party in Spain: VOX. Applebaum addresses the important question of how VOX suddenly won 10 percent of the votes, securing 24 seats in parliament, after not being able to win even one seat in the 2016 elections. She explains that the VOX phenomenon is part of a “larger global story about the online and offline campaign tactics developed by the American alt-right and the European far right, which are now used throughout the world.” She also explains in great detail how VOX mobilized with the help of social media marketing to exacerbate polarization and create distrust against the elite and the political “mainstream.”

Anti-Muslim racism has played a central role in Spanish elections since at least 2010. An analysis by two political scientists, Ricard Zapata-Barrero and Flora Burchianti, showed that mainstream party representatives drew heavily on racism in the local, autonomous, and national elections in 2010-2011. According to these authors, despite the reduced presence of the organized far-right in Catalonia, mostly centrist-right parties claimed that cultural pluralism and diversity would challenge social cohesion. Anti-Roma hate speech and a Burqa Ban in the city of Lleida were clear examples of the resulting shift to the extreme right.

Thus, while its recent political success is unprecedented, VOX should not be mistaken for an entirely new party. Indeed, most members of the party only recently turned their back on the mainstream Partido Popular (PP), disillusioned with its centrism and pro-EU stance. For VOX, the recent political developments provided a window of opportunity. Many Spanish voters were disenchanted by the socialist government between 2004 and 2010. Following a takeover of power by the centrist-right PP in 2010, the conservative prime minister Mariano Rajoy was ousted in 2018. It seems the subsequent weakening of the PP due to cases of corruption and internal divisions laid the foundation for the emergence of extremist right-wing parties such as VOX. VOX has since found some success in filling the void left behind by the traditional two parties.

As early as in 2013, when it was born as a split-off party from the centrist-right PP, VOX advanced a nationalistic and Islamophobic agenda. From the very beginning, the party used tactics similar to those of other European radical right-wing parties, employing Islamophobic rhetoric alongside anti-feminist rhetoric and framing its racism as a defense of Spain’s ‘Christian values.’ Defending Christian values and mobilizing against the application of Islamic Law were part of its strategies from early on. Moreover, as the 2017 report on Spain of the European Islamophobia Report by Carmen Aguilera-Carnerero revealed, VOX increased its presence in social media heavily. In the 2018 elections, the party’s platform included a proposal to close so-called ‘radical’ mosques, declared a preference for Hispanic immigrants who could be more easily integrated than Muslim immigrants.

This trend has continued, leading more mainstream parties like the PP to draw on anti-Muslim rhetoric in order to compete with the rising VOX. The PP is also part of the largest party family in the European Parliament, the European People’s Party (EPP) and represents one of the strongest parties in Spain. In 2015, the PP used slogans such as “Do not let the Raval become an Islamic ghetto,” framing Raval, one of Barcelona’s neighborhoods with a high concentration of immigrant population, as a ghetto. Another PP slogan was “No to the great mosque of Cornellà,” very much resembling the anti-Muslim rhetoric that could be found with radical right-wing political parties in the rest of Western Europe at the time, from Austria’s Freedom Party (FPO) to France’s Front National (today called the Rassemblement National). The rhetoric of the centrist-right PP even included slogans such as “Clean Badalona in the city of Badalona,” implying a need to clean the city of ‘dirty immigrants.’ This rhetoric reminds many European observers of the harsh anti-Semitic language used to dehumanize Jews and justify their annihilation. But the PP hardly saw such rhetoric a reason to remove one of its most prominent politicians from his office of mayor of Badalona. Rather the opposite: He was even named the PP’s candidate for Catalonia’s regional government for the September 2015 election, probably in an attempt to neutralize the emerging, racist VOX.

In this way, VOX has made the Spanish political landscape more like that of other European countries. Portraying Islam as contradictory to European values and traditions is central to the claims of the far-right throughout Europe. Following a similar logic as the Identitarian movement or a terrorist like the Christchurch attacker, who warned of the ‘Great Replacement,’ VOX talks about the “Reconquista” (Reconquest) of Spain. The party thus connects the Catholic reconquest of Muslim Spain in 1492 to the current ‘reconquest’ by the ‘illegal immigrants’ and others who plan to defeat Spain as a nation.

Following its success in this year’s European parliamentary elections, VOX has not joined the new group of right wing extremist parties, ‘Identity and Democracy.’ But this does not mean that it is not working with right-wing parties. To the contrary, it seems that for now VOX is trying to win Spanish votes by downplaying its links to other radical right-wing parties. This strategy of hiding the transnational and international connections has been used by many other right-wing parties in the past. Only after becoming more ‘mainstream’ have such parties begun to reveal these connections.

As a party that won 24 seats in the Spanish parliament in the last elections with 10.26% of the vote, VOX is probably going to stay in parliament. With the exception of a short-lived representation of a single openly pro-Francoist parliamentarian from 1979-1982, VOX could be the first electorally successful right-wing political party after the death of dictator Francisco Franco in 1975. Following the handbook of other European right-wing parties, VOX seems to be on a path to success in reshaping Spain’s political landscape. The upcoming elections on November 10 will show if VOX can maintain or even increase its representation in parliament.