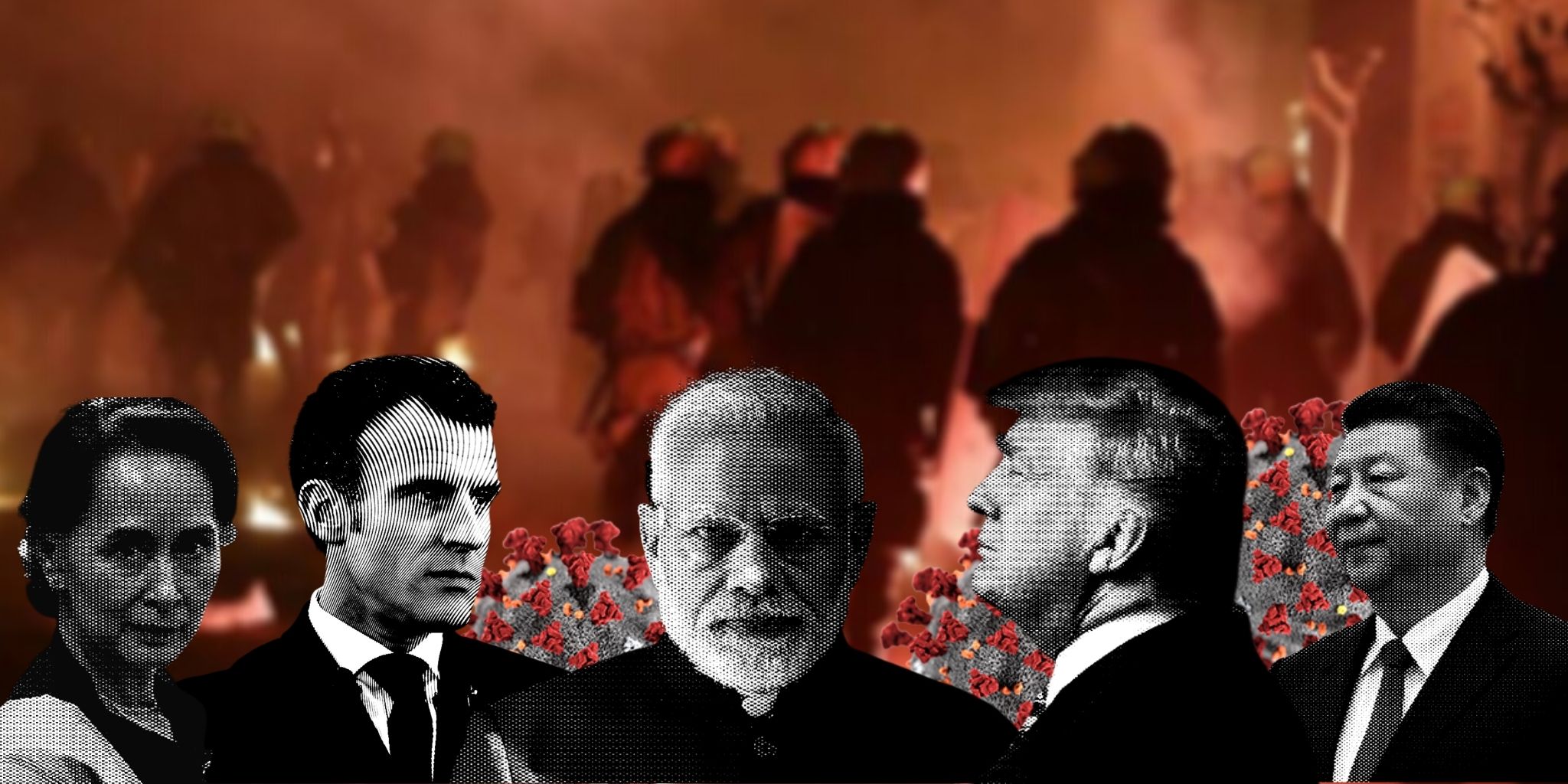 2020 will be remembered as the year a novel coronavirus circulated all corners of the earth resulting in death, widespread panic, and the near shutdown of the international community. The global pandemic waged havoc across the global, killing millions, creating instability and uncertainty, and bringing global economies to a standstill. As the world now sets hope on a number of vaccines, the pandemic and the fears that came with it will certainly remain the defining event of the year.

Lockdowns around the globe brought nations to a halt. Those privileged enough stayed within their homes while countless others were left stranded and unable to find their next meal, bringing attention to the emerging and stark inequalities in society. As some leaders called on their citizens to take precautionary measures including wearing facemasks and observing social distancing, many others failed to take the virus seriously with a few even going so far as to claim the virus was a hoax.

In 2020, conspiracy theories and COVID-19 were interlinked as people spent greater time online where false information spread like wildfire. COVID-19 made people susceptible to misinformation due to a combination of social isolation, anxiety, and all-around unpredictability. The environment was made worse as leading heads of state such as U.S. President Donald Trump platformed conspiracy theories, lending them legitimacy and slowly chipping away at the already fragile construction of truth. From the United States to India, many of these false claims incorporated Islamophobia, alleging that Muslims were responsible for the spread of COVID-19.

In the United States, the QAnon conspiracy theory reached new heights as a number of candidates running in the 2020 elections supported the outlandish claims. The umbrella conspiracy theory speaks of a “deep state” and alleges that the “the world is run by a cabal of Satan-worshiping pedophiles who are plotting against Mr. Trump while operating a global child sex-trafficking ring.” When it came to COVID-19, QAnon supporters claimed that the virus was a hoax.

President Trump ignored all warnings of the virus downplaying its severity, only to change his mind and employ his  racist lexicon by calling it the “China virus.” He further used the pandemic to push  more discriminatory measures such as new immigration bans.  As a serial tweeter, Trump promoted accounts connected to or elevating the QAnon conspiracy theory, all the while failing to denounce it. During the summer, QAnon adherents claimed there was a “secret plan orchestrated by Muslims to bring Sharia law to the United States by way of coronavirus restrictions.”

The fringe movement also gained a foothold in American politics with at least two Republican candidates (who both went on to win their races and become members of Congress) embracing the theory during the 2020 election cycle. The consequences of having conspiracy theorists as elected representatives makes for a dangerous situation, weakening institutional trust within an already fragile system. One politician who won her race was Republican congresswoman from Georgia Marjorie Taylor Greene, who has a history of making racist, antisemitic and Islamophobic statements. The 2020 elections also witnessed a shift in American leadership as over 81 million Americans voted for Joe Biden as the next President of the country, signalling a change for the country and possibly the world.

It would be incomplete to reflect on 2020 without discussing the Black Lives Matter movement and calls to address systemic racism around the globe. The brutal murder of George Floyd by Minneapolis city police offices ignited a national and international call for an end to police brutality and structural and institutional racism. These issues converged amidst the pandemic as data revealed that the virus was disproportionately impacting Black people and people of color in both the United States and the United Kingdom.

For Indian Muslims, 2020 brought  an avalanche of violence and marginalization. Weeks before the government’s haphazard lockdown, Hindu nationalists launched a wave of attacks that  targeted Indian Muslims in parts of the capital. Reports emerged that law enforcement silently stood by and watched as mobs of Hindu nationalists pounced on Muslims and set fire to their homes and businesses. Members of the ruling party, the right-wing Bharatiya Janata Party (BJP), even encouraged the attacks. An Atlantic piece shortly afterwards rightfully described the rampage as a pogrom.

This was the environment in which the government instituted a last-minute lockdown to contain the spread of the deadly virus, giving just a four-hour warning for a country of one billion to sort out their needs. For the vast majority of Indians who live in deep poverty, the lockdown itself was a death sentence and for migrant workers it meant a long and sometimes deadly route home. For Indian Muslims, the situation was doubly troubling given the increasing marginalization they’ve experienced under the rule of the BJP. As the pandemic spread and cases skyrocketed in the country, right-wing media focused on an incident involving an Islamic missionary group. TV news stations, as well as social media, used virus cases following the annual meeting of the Tablighi Jamaat to claim that Muslims were responsible for COVID-19, dubbing it “Corona Jihad”, with one newspaper even going so far as to equate Muslims with the actual virus. The growing anti-Muslim rhetoric in the media and amongst leading politicians created a “genocidal climate,” as it dehumanized Indian Muslims constructing them as an existential threat.

As the year progressed, the conspiracy theories did not dissipate. In the past couple of months, BJP politicians have supported calls for legislation targeting interfaith marriages. Their argument rests upon a racist and misogynistic conspiracy theory called “Love Jihad.” Supporters of it claim that Muslim men are luring Hindu women into marriages with a goal  of forcing them to convert to Islam. As of early December, the state of Uttar Pradesh has passed a law based on this theory, with another four states (all led by the BJP) introducing similar legislation prohibiting “forced religious conversions,” despite no evidence supporting such claims. The legislation and conversation surrounding it only makes Indian Muslims vulnerable to even greater violence and discrimination, as it “others” fourteen percent of the country’s population.

In the United Kingdom, Boris Johnson’s government failed to provide clear guidance and took the lone path of “herd immunity,” which could have resulted in the deaths of hundreds of thousands. Once the government came to terms with this reality, the U.K. imposed a nationwide lockdown. As the year progressed, false claims were made by right-wing online commentators accusing the country’s Muslim population of violating lockdown orders, despite no evidence to verify such claims. Misinformation spread online with allegations being made that Muslims were breaching lockdown rules by keeping the mosques open.

The government’s own lockdown policies and the media’s images insinuated that Muslims were somehow responsible for the spread of the virus. Hours before the Islamic holiday of Eid-Al-Adha, the government imposed a new lockdown in the north of England (an area which has a high Muslim population) resulting in Muslim families unable to get together to celebrate. While restrictions were placed on household gatherings, people noted that the lockdown “did not include the closure of pubs or restaurants.” The contradictions of this policy have become even more glaring given the Conservative government’s efforts to “save Christmas,” despite rising cases and every other religious group having to observe religious holidays under lockdown restrictions.

2020 was also another year in which the Conservative party failed to uphold its promise to carry out an inquiry into Islamophobia in the party. As the amount of evidence continues to grow, the party’s failures to seriously tackle this issue only signals to wider British society that anti-Muslim racism is acceptable.

In China, the plight of Uighur Muslims continued as reports revealed more information about the ongoing genocide. The virus originated in late 2019 in the country’s Wuhan province and spread rapidly across the world. As information from Chinese authorities remained limited, news regarding the health and conditions of those detained in the network of concentration camps and prisons was non-existent. Uighurs abroad warned of mass deaths given the harsh, unsanitary, and abhorrent conditions in the camps. More information surfaced regarding the supply chain of large corporations such as Apple, Nike, and Coca-Cola being tainted by rising reports forced labor in the region. Perhaps the most shocking evidence demonstrating China’s genocidal aims was the revelation of policies of forced sterilization, abortions, and birth control being imposed by the authorities on Uighur Muslim women.

In France, as well as many other European countries, commentary during the pandemic underscored the hypocrisy in the rules regarding mandatory face masks given that many of these same countries have imposed niqab and burqa bans. In the last few months of 2020, we’ve seen France embark on a totalitarian campaign to re-configure its Muslim population, one that bears striking similarities to China’s efforts to “sinicize” Uighur Muslims, which essentially means implementing policies to wipe out ethnic and religious identity and culture. Under the guise of “counter-terrorism,” the French government has embarked on a heavy-handed campaign criminalizing French Muslims and restricting basic freedoms. Rather than truly uphold the concept of Laïcité, the government has weaponized it as it aims to control the parameters of Islamic identity and observance. The country is home to Europe’s largest population of Muslims, and these five million citizens who call the Republic home are experiencing further deterioration of their basic human rights, and being forced to choose between their faith and nationality.

Building on the mainstreaming of Islamophobia in 2019, anti-Muslim racism became further entrenched in 2020 as heads of state and government officials consolidated their power and imposed policies aimed at further restricting the rights of Muslims. Just as in the previous year, the most clearest, harmful, and deadly examples of Islamophobia came from the state as demonstrated by China’s campaign of genocide targeting Uighur Muslims and India’s continuing marginalization of its Muslim citizens. What remained a consistent theme throughout the year was a policy to “other” Muslims, which often led to violence at the hands of authorities who detained Muslims in concentration camps and implemented policies rendering them second-class citizens.

In 2020, Islamophobia was exacerbated by the novel coronavirus. Misinformation was rife online and the instability and uncertainty caused by COVID-19 made people more susceptible to false information and conspiracy theories. Further, the pandemic also highlighted deep-seated systemic inequalities as Black people and people of color were disproportionately impacted by the deadly virus. As COVID-19 spread and governments failed to adequately address the situation, politicians and sectors of the media turned the focus on Muslims, scapegoating the minority population by falsely blaming them for spreading the virus and evading lockdown orders.

In a year when unity was needed more than ever to combat a deadly pandemic, many instead chose to further marginalize the most vulnerable. This year demonstrated that the most virulent and dangerous form of Islamophobia is the one practiced by those in power, and often instituted in the form of discriminatory legislation and policies, which erode fundamental human rights and lay the foundation for widespread repression.