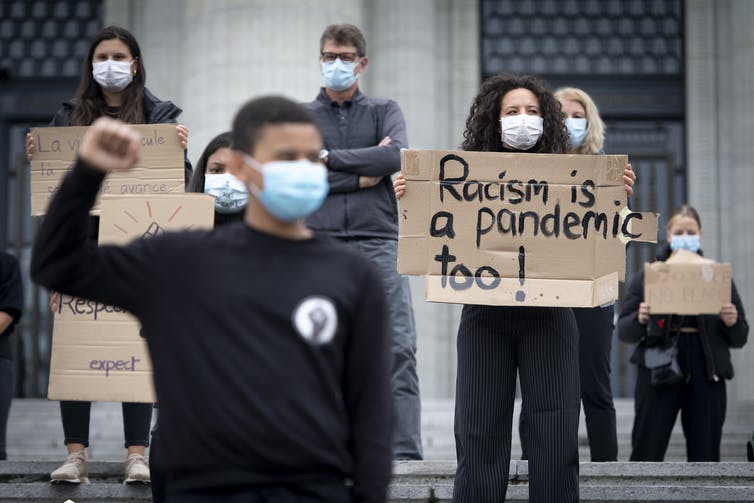 Nearly two months after the first known death from the novel coronavirus was logged in the U.S., protests spread around the country in support of ending stay-at-home orders. Ohio, Minnesota, Virginia, Florida, Texas, and several other states witnessed calls to reopen the country, despite increasing numbers of COVID-19-related deaths. In Michigan, most notably, armed protestors staged demonstrations in front of the state Capitol and a barbershop was guarded by armed militiamen to prevent police from closing it down.

The protests, which had been organized by conservative, pro-gun, and anti-abortion groups and carried out by conspiracy theorists and far-right groups such as the Proud Boys, exhibited a disregard for the disproportionate impact of COVID-19 among minority and working class groups and challenged notions that the virus affected all communities equally.

As opposed to earlier calls of being a societal equalizer, COVID-19 has revealed deep-seated inequities within our social institutions and reinforced what many BIPOC (Black, Indigenous, and People of Color) have long known about structural racism, particularly in health, employment, and housing. The racial disparities in the impact of COVID-19 that are currently playing out are only one feature of a system of larger, historical structures that have ignored the health, wellbeing, and quality of life of BIPOC communities.

Black communities across the nation have been at the forefront of harm caused by COVID-19. In a June 2020 hearing of the House Energy and Commerce Committee, Director of the National Institute for Allergy and Infectious Diseases Dr. Anthony Fauci acknowledged that institutional racism has “contribute[d] to the disproportional impact that the coronavirus pandemic has had on the Black community.” According to a Washington Post-Ipsos poll, “31 percent of black adults say they know someone firsthand who has been killed by the virus, compared with 17 percent of adults who are Hispanic and 9 percent who are white.”

Current numbers for Black COVID-19-related deaths are nearly double the percentage of  Black Americans in the U.S. population. The COVID Racial Data Tracker reports that Black Americans represent 23% of COVID-19-related deaths where race is known, despite representing only 13% of the population. According to a further May 2020 study completed by the Foundation for AIDS Research and several other organizations, counties across the U.S. with a disproportionate number of African American residents – Black populations of 13 percent or greater – “accounted for 52 percent of diagnoses and 58 percent of coronavirus deaths nationally.”

Due to inequities in “income, health care access, access to food, and more,” Latino communities are also at the forefront of harm caused by COVID-19. As of June 26, 2020, the CDC reports that Hispanic or Latino individuals represent 16.6% of coronavirus deaths, despite representing only 18.3% of the U.S. population. The CDC additionally ranks the weighted Hispanic and Latino population of the U.S. at 27.7%, which takes into account COVID-19 deaths concentrated in areas “where the racial and ethnic population distribution differs from that of a given state or the United States overall.” Salud America! notes that “37 of 41 reporting states and D.C. have an over-representation of Latino deaths, according to the weighted CDC data.”

Public health officials have warned that “the official statistics may be underestimating the virus’s toll on Latino communities wary of seeking medical care due to a lack of health insurance, and in many cases fear that going to a hospital will expose them to immigration authorities.”

Indigenous communities have additionally been heavily impacted by COVID-19. Due to racial misclassification and the failure of state health departments to recognize Native individuals in demographic data, there have been fears of “hidden health emergencies in one of the country’s most vulnerable populations.” Among the states that do recognize Native individuals in their data, stark inequalities have been revealed.

The Center for American Progress reports that “Native people make up only around one-tenth of New Mexico’s population but more than 55 percent of its coronavirus cases … [and] in Wyoming, [American Indian and Alaska Native] people are less than 3 percent of the state population but make up more than one-third of its cases.” According to the Indian Health Service (IHS), 17,699 cases have been confirmed across all tribal nations. The Navajo Nation represents the majority of confirmed cases, with a total of 7,897. Overcrowded housing, loss of income, health disparities, and limited resources and lack of PPE have made it difficult to develop a safeguard against the spread of the virus and treat those who have already contracted it.

Racial disparities in cases of and deaths related to COVID-19 are closely tied to class, essential jobs, and who has the privilege of working from home. According to the Economic Policy Institute, “a disproportionately high share of black and Hispanic workers cannot telecommute.” In particular, Latinos constitute a noteworthy portion of “the ‘essential’ workforce of grocery store staff, restaurant workers, caretakers, cleaners and delivery workers, and are putting themselves at the frontlines of the pandemic.” A significant portion of essential jobs are also “low-paid ones, where paid leave isn’t an option, let alone the offer of employer-subsidized health insurance.”

Women, particularly women of color, represent a substantial number of those working essential jobs. According to the New York Times, “One in three jobs held by women has been designated as essential” and “the work they do has often been underpaid and undervalued.” Additionally, women make up “nearly nine out of 10 nurses and nursing assistants, most respiratory therapists, a majority of pharmacists and an overwhelming majority of pharmacy aides and technician” and “more than two-thirds of the workers at grocery store checkouts and fast food counters.” Without the ability to work from home or use paid leave, BIPOC are not only rejected the luxury to fully practice social distancing, but put themselves at risk of being exposed to the virus.

On structural racism, the Urban Institute notes that “the deep racial and ethnic inequities that exist today are a direct result of … the historical and contemporary policies, practices, and norms that create and maintain white supremacy.” In order to make sense of the racial disparities of the impact of COVID-19, it is important to keep in mind that they are built upon years of policies that have failed to address the disadvantages faced by BIPOC communities and to correct historical wrongs.

Within the employment, housing, and health sectors alone, where COVID-19 has had a harsh impact, BIPOC are situated at intersecting points of disadvantage. In the medical field, structural racism has influenced who has access to health insurance, the quality of healthcare, stereotypical theories about how Black people experience pain, and Black and Indigenous maternal mortality rates. In the employment sector, it has played a part in racial wage gaps, disproportionate poverty rates, and disparities in unemployment rates. In the housing sector, it has been a determinant of access to affordable housing, access to food, and segregation, displacement, and gentrification. Inequalities in each of these sectors and their respective institutions are often connected, leaving BIPOC communities vulnerable to facing inequities on multiple fronts.

As cases of COVID-19 continue to rise amidst national conversations surrounding structural racism and police brutality, calls to acknowledge and alleviate racial disparities must be met with concrete plans for restructuring the institutions that currently replicate these disparities.