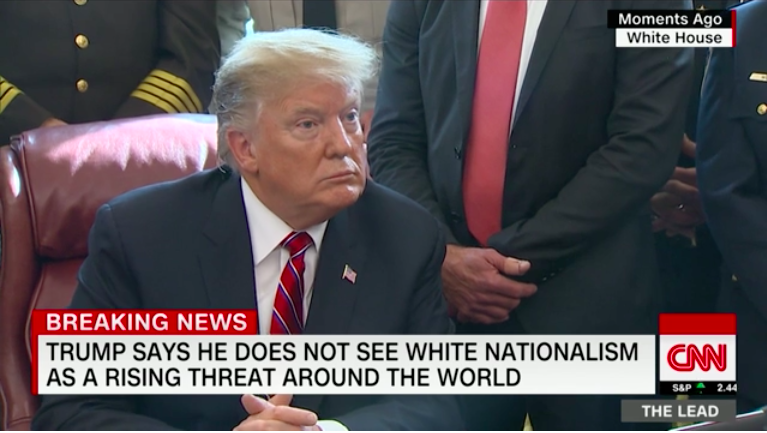 Screenshot of President Trump during a press conference in March 2019 from the White House. The chyron text reads: “Trump says he does not see white nationalism as a rising threat around the world.”

On March 15, 2019, a white Australian man entered two mosques in Ōtautahi/Christchurch and opened fire upon worshippers performing Jummah (Friday) prayer. Fifty people were murdered that day, and 48 sustained serious injuries. The shooter, who streamed his actions live on Facebook, published a ‘manifesto’ titled “The Great Replacement.” The document, which he published prior to waging an attack[1] on the Al Noor Mosque and the Linwood Islamic Centre, is replete with white supremacist and eugenicist conspiracy theories and anti-immigration arguments about ‘white genocide’ (the ‘replacement’ of white people by non-white people) and unfavorable fertility rates (too low among white people and too high among immigrants of color and Muslims), focusing in particular on Muslim immigrants (whom he referred to as “invaders”) and the superiority of the ‘white race.’

The racist theories and arguments advocated by the shooter are neither new nor fringe, and they are not limited to Aotearoa/New Zealand.[2] They are based on a discredited theory of race ‘science’ created by Europeans during the 18th and 19th centuries to legitimize colonialism, settler colonialism, and transatlantic slavery. In the U.S., anti-immigration rhetoric is almost always used in reference to immigration and asylum requests by Afro-Indigenous, Indigenous, Afro-Latinx, and Latinx people from Central America, in addition to Haitians and Africans, along the Mexico-U.S. border. In addition, anti-immigration and anti-Muslim political discourse often looks to European countries as a ‘cautionary tale’ of the so-called ‘Islamization’ of white European Christian nations as a result of Muslim immigration and refugee resettlement.

At the 2019 Conservative Political Action Conference (CPAC), an annual conference that describes itself as the “birthplace of modern conservatism,” multiple speakers referred to immigration as an “invasion,” including Fox News host Jeanine Pirro and Fox News contributor Michelle Malkin. Malkin cited the anti-immigration and eugenicist-founded organization Federation for American Immigration Reform (FAIR) and stated, “Tens of thousands of people are pouring in through terrorism breeding grounds through the lottery; un-vetted, unmonitored and unassimilated.” Malkin also referred to the white nationalist, misogynist, racist, and anti-Muslim Proud Boys founder Gavin McInnes; far-right, anti-Muslim activist Laura Loomer; the anti-immigration Center for Immigration Studies; and the anti-Muslim David Horowitz Freedom Center as “my friends.” Fox News host Laura Ingraham raised the demographic threat, claiming, “Even in Sweden, these more middle of the road parties are moving to question what happened with this mass migration of refugees that have changed life in Sweden.”

According to reporting by Huffington Post’s Christopher Mathias, former Toronto mayoral candidate and anti-Muslim, anti-immigration, and white nationalist Faith Goldy attended CPAC. Goldy, who once recited the white supremacist ‘fourteen words’ slogan on neo-Nazi podcast ‘The Daily Stormer,’ was conducting interviews at CPAC on behalf of VDare, a white supremacist and anti-immigration website named after Virginia Dare, the first English child born in the 16th century English settler colony on Roanoke Island. Goldy conducted interviews with Malkin, VDare founder Peter Brimelow, and far-right activist Laura Loomer, who in November 2017 was banned from Uber and Lyft for tweeting, “Someone needs to create a non-Islamic form of @uber or @lyft because I never want to support another Islamic immigrant driver.”

In her interview with Malkin, Goldy stated that the Muslim Ban is a Trump policy that “ha[s] worked” and described Malkin as an “immigration patriot.” Malkin briefly described her 2002 book about immigration enforcement, Invasion: How America Still Welcomes Terrorists, Criminals, and Other Foreign Menaces to Our Shores. During his interview with Goldy, Brimelow advocated that Republicans “have a moratorium on immigration and/or shift immigration back towards whites.” Loomer described journalist Jared Holt, who had criticized CPAC for giving press credentials to an anti-Muslim conspiracy theorist (Loomer), as a “left-wing agitator.”

U.S. President Donald Trump has a history of minimizing the threat of white supremacy and promoting white supremacist rhetoric and conspiracy theories himself, including at CPAC in 2017, 2018 and 2019. Following the Ōtautahi/Christchurch massacre, a journalist asked President Trump whether white nationalism is a rising threat. Trump responded, “I think it’s a small group of people that have very, very serious problems, I guess.” An August 2017 poll by ABC News/Washington Post, however, tells a different story. The poll found that nearly one in ten Americans responded that it’s “acceptable” to hold neo-Nazi or white supremacist views. This is equivalent to over 29 million Americans.[3] Additionally, following the August 2017 white supremacist march on Charlottesville, Virginia, in which one protestor, Heather Heyer, was killed and countless more injured, Trump drew moral equivalency between counter-protestors and white supremacists who chanted slogans like “Jews will not replace us” and “white lives matter.” According to Trump, “You also had people that were very fine people on both sides.”

“The racist theories and arguments advocated by the shooter are neither new nor fringe, and they are not limited to Aotearoa/New Zealand.”

On October 31, 2018, Trump tweeted, “It is outrageous what the Democrats are doing to our Country. Vote Republican now! http://Vote.GOP.” The tweet linked to a video that accused the Democratic Party of allowing murderous, cop-killing immigrants into the U.S., interspersed with images of large crowds of brown people. The final frame of the video reads, “President Donald J. Trump and Republicans are making America safe again!” Reporting in Esquire described this video as “outright propaganda” and a “racist bullhorn of a political ad” that railed against immigration. Timed to rally his base less than a week before the 2018 midterm elections, the tweet appeared to be an effort to galvanize support through fear and hatred.

Chillingly, Trump’s white supremacist, anti-immigration propaganda mirrored anti-semitic and anti-immigration rhetoric that, just days earlier, was cited as justification for a deadly, anti-Jewish mass shooting. On October 27, 2018, a white supremacist attacked the Tree of Life Synagogue in Pittsburgh, Pennsylvania, murdering 11 Jews. Moments prior to the attack[4], the shooter posted on Gab, the social media platform notorious for white supremacist users, that Jewish refugee resettlement agency, HIAS, “likes to bring invaders that kill our people,” and that he “can’t sit by and watch my people get slaughtered.”

Trump and other U.S. politicians have also promoted anti-Muslim conspiracies and alarmist, sensationalized claims about immigration and refugee resettlement in Europe. In February 2017 during a rally in Florida, Trump stated, “You look at what’s happening in Germany, you look at what’s happening last night in Sweden. Sweden, who would believe this. Sweden. They took in large numbers. They’re having problems like they never thought possible.” Nothing, however, had taken place in Sweden. It later became apparent, that Trump had been recalling an interview on Fox News that aired the previous evening, in which host Tucker Carlson interviewed a filmmaker who had produced an anti-Muslim documentary about Swedish migration policy.

In March 2017, U.S. Member of Congress Steve King from Iowa tweeted content from the far-right, anti-Muslim website ‘Voice of Europe,’ which had praised anti-Muslim Dutch Parliamentarian Geert Wilders: “Wilders understands that culture and demographics are our destiny. We can’t restore our civilization with somebody else’s babies.” In a later interview on CNN about his white supremacist tweets, King doubled down: “We need to get our birth rates up or Europe will be entirely transformed within a half century or a little more. And Geert Wilders knows that and that’s part of his campaign and part of his agenda.”

In November 2015, then-U.S. Member of Congress from Michigan Pete Hoekstra spoke on a panel at a conference organized by the David Horowitz Freedom Center (DHFC), the anti-Muslim organization that Malkin had praised in her remarks at CPAC. Hoekstra claimed that “the Islamic movement” has established so-called “no-go zones” throughout Europe, a conspiracy theory pushed by many anti-Muslim and far-right individuals and media hosts. According to Hoekstra:

The ‘no-go zones’ conspiracy theory erroneously claims that there are ‘Muslim enclaves’ in Europe in which Muslims are ‘unassimilated,’ ‘radicalized,’ and governed by Islamic law, where police officers and emergency service providers are afraid to enter. It is no surprise that Hoekstra made such claims at a DHFC conference. In 2015, DHFC was the largest donor to Wilders’ far-right Dutch Freedom Party (PVV), which seeks to “de-Islamize” the Netherlands. Moreover, in 2007, Horowitz mentored now-White House advisor Stephen Miller, who spearheaded the DHFC “Islamo-Fascism Awareness Week” campaigns on U.S. universities.

In July 2017, Trump nominated Hoekstra as the U.S. Ambassador to the Netherlands, which was confirmed by the Senate in November 2017. One month prior to his nomination, Hoekstra was a Shillman fellow with the Investigative Project on Terrorism (IPT), an anti-Muslim organization well-known for advancing anti-Muslim conspiracy theories about no-go zones and the Muslim Brotherhood.

In his ‘manifesto,’ The Ōtautahi/Christchurch shooter lauded President Trump as a “symbol of renewed white identity and common purpose.” Donald Trump and other U.S. politicians like Representative Steve King and Ambassador Pete Hoekstra propagate white supremacist conspiracy theories and ideology like those utilized by the Ōtautahi/Christchurch shooter. By virtue of their respective positions of political power, Trump, King, and Hoekstra are positioned to craft laws and policies that bolster white supremacist values and beliefs, such as immigration restrictions of Muslims and people of color. Moreover, national media personalities such as Michelle Malkin, Jeanine Pirro, and Laura Ingraham; blogs and bloggers such as Faith Goldy, Laura Loomer, and VDare; and non-profits and organizations such as the David Horowitz Freedom Center and the Federation for American Immigration Reform, fuel anti-Muslim and anti-immigration political rhetoric and narratives. Such language reinforces and serves to legitimate anti-Muslim and anti-immigration policies, laws, and legislation.

[1] The suspect, Brenton Tarrant, has been charged with 50 counts of murder and 39 counts of attempted murder.

[2] For a history of white supremacy in Aotearoa/New Zealand and Australia: https://newrepublic.com/article/153332/longer-history-christchurch-attacks. For a list of the present-day white supremacist movement in Aotearoa/New Zealand: https://paparoa.org/secure/an-introduction-the-organised-far-right-in-aotearoa-nz/. For a look into the role the Pacific slavery by European New Zealanders: https://www.radionz.co.nz/national/programmes/sunday/audio/201825485/new-zealand-and-the-pacific-slave-trade.

[4] The suspect, Robert Bowers, has been charged with 29 crimes, including multiple hate crimes.