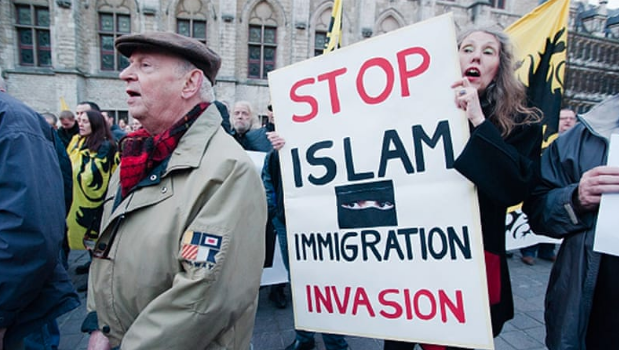 On March 15, 2019, a 28-year-old white Australian man carried out a massacre targeting two mosques in Christchurch, New Zealand. Brenton Tarrant entered the mosques during Friday prayers, shooting Muslims as they prayed, killing 50 and injuring dozens of others. The eldest victim, Haji Daoud Nabi, was 71 years old, and the youngest, Mucad Ibrahim, was just 3 years old. The shooter live-streamed the entire attack on Facebook and published a 74-page manifesto detailing his reasoning for the attack and its focus on Muslims as his target.

The Christchurch gunman’s manifesto is a reflection of the broader public discourse on immigration and white identity. Tarrant’s claim that an “invasion” of “millions of people pouring across our borders, legally” is not an aberration; it is reflected in today’s public discourse and in immigration policies in Europe. In 2015, the United Nations announced the world was experiencing the largest refugee crisis since World War II. Millions of men, women, and children seeking to escape war, poverty, and violence in Afghanistan, Syria, Somalia, Sudan, the Democratic Republic of Congo, and elsewhere looked towards Europe for safety and security. European media in turn covered the humanitarian crisis through a victim-villain binary, framing the refugee/migrant as a ‘foreign threat.’  Mainstream media outlets have covered immigration and the refugee ‘crisis’ as an invasion by people from Africa and the Middle East (often emphasizing Muslim identities), an assault on the national identity and way of life, and as sexual threats to white women and girls.

In particular, British tabloid and news headlines used words such as “swarm,” “invasion,” and “influx” to describe the growing numbers of individuals arriving in Europe. Dehumanizing rhetoric such as “hordes” who will “flood” across the borders was used to describe refugees, migrants, and asylum seekers in search of safety. Additionally, the media invoked war imagery with the use of military metaphors, such as headlines like, “send in the army” to stop the “invasion.” A 2015 feature in The Spectator that discussed the “invasion” of Italy and was accompanied by an illustration of boats encircling the country as segments of the border wall are destroyed. When terminology associated with masses of insects and war is used, it’s inevitable that the individuals who are seeking safety and shelter will be viewed as the enemy seeking to infiltrate, destroy, and overthrow. 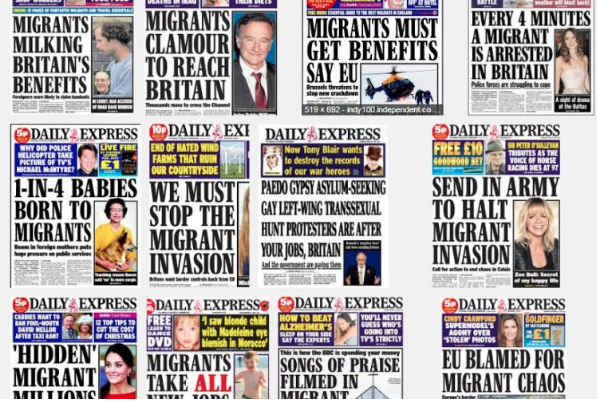 “Tarrant’s claim that an “invasion” of “millions of people pouring across our borders, legally” is not an aberration; it is reflected in today’s public discourse and in immigration policies in Europe.”

In an exceptionally disturbing piece from 2014, the British tabloid, Daily Mail, published a cartoon likening refugees and migrants to rats. The racist and dehumanizing imagery evoked the days of Hitler’s Germany when Nazi propaganda depicted Jews as rats. In 2015, anti-Muslim journalist Katie Hopkins continued with the degrading rhetoric as she likened migrants to “cockroaches” in a column published in The Sun.

Similar dehumanizing terminology was present throughout Tarrant’s manifesto. From the very first page of the document, he claimed, “We are experiencing an invasion on a level never seen before in history,” and repeatedly referred to Muslims as “invaders,” and to Muslim immigration to Europe and white settler colonial states such as Australia and Aotearoa/New Zealand (Aotearoa is the Indigenous Māori word for New Zealand) as an “invasion.” Tarrant employed such language 59 times in the manifesto. He also pointed to mass immigration as a threat to the existence of the “white race,” and called on his readers to “crush immigration and deport those invaders already living on our soil.”  He also referred to Muslims as “vipers.”

A 2015 study by researchers at Cardiff University examined how the refugee crisis was being reported in the press in different European countries, and found that British “right-wing press consistently endorsed a hardline anti-refugee and migrant, Fortress Europe approach.” Specifically, the study found that “British right-wing press…stressed the threat that refugees and migrants posed to domestic welfare and health systems at a much higher level than the other countries in the sample.”

Additionally, such divisive language was normalized with the Brexit campaign-the withdrawal of the United Kingdom from the European Union. Some supporters of the move relied heavily on anti-immigrant sentiment; this was exemplified by then UKIP-leader, Nigel Farage’s “Breaking Point” poster. The poster showed a queue of predominantly non-white individuals with the subheading, “We must break free of the EU and take back control of our borders.” After it was unveiled, The Guardian reported twitter users had “pointed out the image’s inadvertent similarity to Nazi propaganda footage of migrants shown in a BBC documentary from 2005.”

What was simply a humanitarian crisis was formulated and discussed as a “civilizational threat” through fear-mongering and racist language.

What was simply a humanitarian crisis was formulated and discussed as a “civilizational threat” through fear-mongering and racist language. The construction of the “other” relies upon age-old orientalist and racist tropes defining the brown and black “foreigner” as a threat to the white European. The threat plays out in fears of a demographic change and a threat to white racial purity and hegemony. Opponents of immigration have also politicized incidents of sexual assault, pointing to the perpetrator’s religious identity as an indicator of propensity towards sexual violence and evidence that Muslim immigration to Europe was dangerous.

Tarrant devoted a subsection of his tract to “the rape of white women,” in which he discussed the “rape of British women by invading forces.” He racialized the ethnic identities of the perpetrators, stating that this was a global “trend of rape and molestation perpetrated by these non-white scum.” His choice of examples parallels the public framing surrounding these incidents, which involved the racialization of sexual assault, often depicting brown and black men as sexual predators.

The discussions surrounding such incidents have often fallen into the age-old racist theme of saving ‘white women’ from ‘brown men.’ Such a trope dates back to the days of colonization when European discourse equated non-white men as sexual threats to white women and by extension white racial purity. In this construct, black and brown men are cast as sexually deviant, perverted, and violent, from whom white women must be protected. The language and imagery relegated white women to the status of property of the state to be defended from the invaders.

It is not only Tarrant who uses incidences of sexual violence as an argument against the immigration of people of color. In Europe, reducing Muslim men to ‘violent lecherous rapists’ has played a significant role in anti-immigration and anti-refugee messaging. Recent examples of this can be seen in a 2014 Polish magazine cover that displayed a terrified white woman, wrapped in a European Union (EU) flag, who is groped by brown hairy-armed men. The photograph was accompanied by the title, “Islamic rape of Europe.” The cover has been compared to an Italian fascist propaganda poster from 1943 showing a black man forcibly undressing a white woman. Both examples objectified women’s bodies and portrayed sexual violence as predicated on skin color. 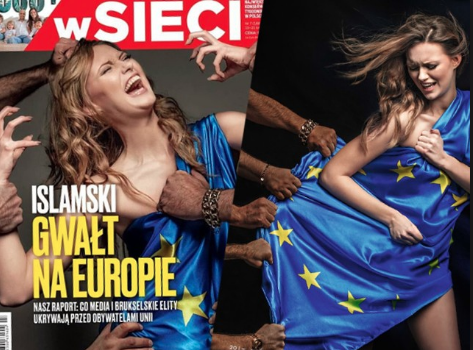 It is not only Tarrant who uses incidences of sexual violence as an argument against the immigration of people of color. In Europe, reducing Muslim men to ‘violent lecherous rapists’ has played a significant role in anti-immigration and anti-refugee messaging.

In 2016, anti-Muslim and anti-refugee protesters utilized the reports of sexual assaults that occurred on New Year’s Day in Cologne, Germany, to rail against the government’s immigration policies. Anti-refugee marchers held posters with silhouette images of bearded men wearing thobes holding knives chasing after a girl, accompanied with the words “Rapefugees not welcome.” One of the leaders of the anti-Muslim Pegida movement, Tatjana Festerling stated, “These Muslim refugees started an area-wide terror attack, a terror attack on German women, on blonde, white women.” In 2016, Süddeutsche Zeitung, one of Germany’s most respected liberal publications, apologized for “publishing a picture of a black arm reaching up between a pair of white female legs.” The picture was associated with an article in which a “psychologist claimed that for young Muslim men, every meeting with a woman is a highly sexualized encounter.” 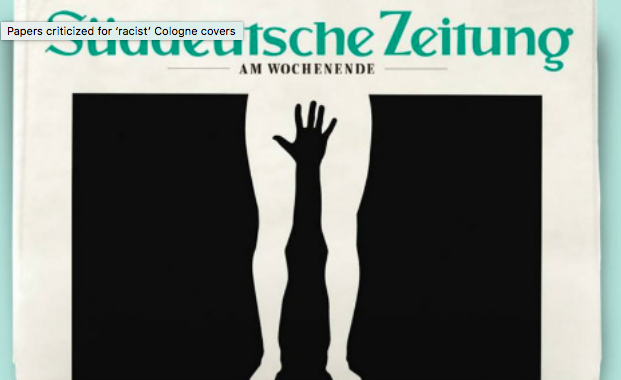 The racial identities in cases of sexual violence are pushed to the forefront in cases where the perpetrators are immigrants/refugees/men of color and victims are white women. Tarrant’s reference to Rotherham is a perfect example of this racialization. Rotherham is a northern English town where media reports in 2011 uncovered widespread child sexual abuse. The reporting led to an independent investigation into child sexual exploitation, resulting in a report published

in August 2014, which found that “between 1997 and 2013, at least 1400 children had been subjected to serious sexual exploitation, predominantly by men of Pakistani origin.”

The media’s coverage of the child sexual abuse cases disproportionately focused on the race, ethnicity, and religion of the perpetrators, which Professor Waqas Tufail argues “served to both frame and limit the debate relating to the sexual exploitation and violence experienced by young female victims at a pivotal moment when the issue had been brought to national attention.” Dr. Tufail noted that a stream of sensationalized headlines followed the 2014 report, focusing exclusively on race and ethnicity, such as a 2014 article in The Telegraph, suggested the “root cause of the abuses ran at the heart of either (or both) the Muslim and Pakistani community.” It also became a central talking point for far-right movements, including Britain First and the English Defense League, whose demands were “projected through racist tropes of Muslim men raping and abusing ‘our’ girls, so the demand for justice became a demand for vengeance.”

Additionally, the “counter-extremist think-tank,” Quilliam Foundation, published a report on “Grooming Gangs” (sexual exploitation gangs who lure victims with emotional ploys) claiming “84% of grooming gang offenders” are Asian. Dr. Ella Cockbain, a professor at University College London who has spent years researching Child Sexual Exploitation (CSE), noted that such reductionist portrayal of “brown men” only “reinforced dubious stereotypes, skewed perceptions and detracted from a much more complex reality.” Dr. Cockbain has repeatedly pointed out the methodological failures of Quilliam’s report, including not having been peer-reviewed and a lack of transparency regarding the data set. She concludes that the report is “riddled with dramatic over-claims of the kind rarely encountered in credible research.” Dr. Cockbain found that the report was widely picked up by the media despite errors and was cited by UKIP’s Alan Craig who claimed that the UK was facing “a holocaust…of our daughters,” arguing that Quilliam had “traced a major part of the influence [on abuse] back to the Islamic faith.” Dr. Cockbain warns that “bad science makes for bad policy and bad practice.”

In all of these examples, including Tarrant’s manifesto, coverage of such sexual assault cases focuses on racialized identities of the individuals involved rather than the actual act of violence. In this framing, the victims fade into the background. These narratives collapse such events into debates surrounding immigration and refugee resettlements in a way that makes two unrelated episodes somehow related, as though there is a natural progression from one to the other: from immigration to sexual assault.

The views of the New Zealand shooter are a reflection of the broader discussions in Europe on immigration and Muslims. Dehumanizing language and racialized reductive analyses were absorbed by the shooter through popular outlets that promoted fear-mongering headlines relating to Muslims and immigrants. Tarrant formed his views within a global atmosphere of normalized Islamophobia, an environment in which Muslims are dehumanized, othered, and considered a threat. In the case of Christchurch, this mode of thinking helped facilitate the massacre of 50 Muslims.