Skip to content Skip to navigation
Bridge Initiative Research Publications Article Remembering the Murder of Marwa El-Sherbini: A Symbol of Deadly Anti-Muslim Racism in Germany
Back 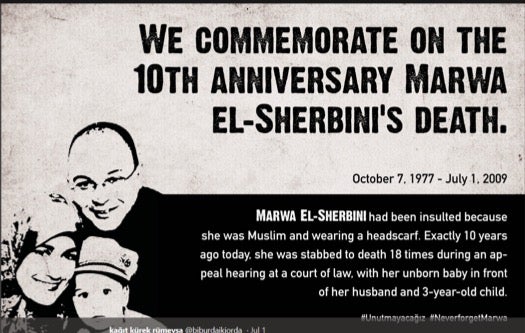 It was the 1st of July 2009, 11.07 a.m., when Marwa El-Sherbini was stabbed to death by a white nationalist in the court of the German city of Dresden. The 31 year old observant  Muslim student of medicine, had sued her murderer for verbally abusing her with words such as “Islamist,” “terrorist,” and “slut” at a public playground.

In court, the German citizen of Russian origin who had insulted El-Sherbini, had positioned himself as a staunch anti-Muslim person and had stated that he would vote for the right-wing extremist National Democratic Party of Germany (NPD). According to him, “When the NPD comes to power, this will end” — referring to Muslim presence in Germany. Following her testimony, the three-month’s pregnant pharmacist El-Sherbini together with her husband and their three-year-old son attempted to leave the courtroom, but were fiercely attacked. Marwa El-Sherbini was stabbed 18 times; she and her unborn child died immediately, Her husband was also stabbed trying to intervene, and then shot in the leg by the police who entered the room after an alarm was activated and mistook her husband for the perpetrator.

While media and politicians had originally been quite silent on the attack, especially on its clear and blatant anti-Muslim motive,  Jewish and Muslim voices underscored the hate motive in this murder. Media strongly suggested that the murderer was a foreign immigrant, despite his German ethnic background, thus externalizing the guilt on foreigners and framing the issue not as a German problem. But things have changed.

The anniversary of the murder of Marwa El-Sherbini has become a date that mobilizes thousands of activists. After the German Muslim student union – RAMSA – claimed 1st July as a Day Against Anti-Muslim Racism, similar to the European Action Day Against Islamophobia on 21 September, the day has become widely acknowledged in German civil society and politics. CLAIM, an alliance of anti-Muslim racist NGO’s in Germany funded by the federal government, is organizing numerous events to commemorate 1st July. The 10th anniversary has not only seen larger media attention in public service broadcasting, but has also witnessed numerous politicians joining public condemnation of this act and anti-Muslim racism in Germany. The hashtag-campaign #HassHatKeinHerz has mobilized thousands of online activists to commemorate this horrific incident of anti-Muslim murder. Cultural activists such as the most famous German Muslim comedy group Datteltäter had already launched a video to commemorate Marwa El-Sherbini’s murder last year. An adult education center in Dresden has presented a photo exhibition that covers 190 victims of right-wing extremist and white nationalist violence between the years 1990 and 2017 to commemorate Marwa El-Sherbini and the constant threat of white nationalism. And politicians of different stripes as well as government bodies commemorate this day of grief.

This op-ed by Bridge Initiative Senior Research Fellow Farid Hafez originally appeared in Anadolu Agency.  The grossly dehumanizing act of hounding people who look ‘different’ has to be evaluated at the backdrop not only of... read the complete article

Anti-Semitism, Homophobia, and Islamophobia: The Rising Far-Right in Poland

November 11 is commonly known as Independence Day in Poland. Government and political leaders usually commemorate the reinstatement of sovereignty at the end of World War I. For political leaders, it is a celebration of... read the complete article