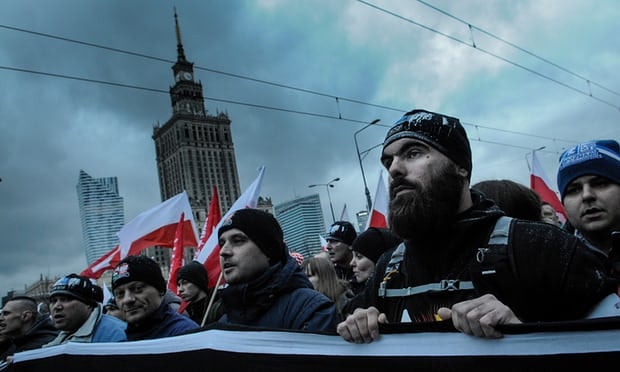 November 11 is commonly known as Independence Day in Poland. Government and political leaders usually commemorate the reinstatement of sovereignty at the end of World War I. For political leaders, it is a celebration of the re-birth of Poland in November 1918, after Poland had been erased from the political map after Prussia, the Habsburg Monarchy, and Russian empires had divided Poland among themselves. Numerous high ranking politicians took part in this year’s commemoration, ranging from former Polish prime minister and today’s European Council President Donald Tusk to the Polish President Andrzej Duda.

But participants in the official government’s events on early Saturday were largely outnumbered by the far-right’s march. Since 2009, the annual march that is taking place in the capital city of Warsaw has become a magnet for nationalist far-right political forces. While in the beginning, the march only mobilized a few hundred people, this year, an estimated 60.000 people “ the largest ever “gathered together. And unlike in Germany, where the far-right anti-Islam organization Pegida rallies in 2015 were greatly outnumbered by counter-demonstrations, the crowd representing the leftist opposition of the Polish nationalist demonstration was tiny.

The nationalist far-right march was mainly organized by three movements: The National-Radical Camp (ONR), the National Movement (RN) and the All Polish Youth (MW). While ONR presents itself as the heir to a 1930s fascist movement of the same name, the MW is named after an anti-Jewish interwar movement. Also ONR was deeply anti-Semitic and aimed at “cleansing’ Poland from its Jewish population before the Holocaust. While the nominal predecessors were clearly anti-Semitic, today’s far-right Polish actors are not only anti-Semitic, but also anti-Muslim and anti-gay.

“We want God,” a slogan taken from an old Polish nationalist song, was the main slogan of the march. This slogan is characteristic for the Polish variant of nationalism. People were chanting “Death to enemies of the homeland,” “God, honour, homeland,” and “Catholic Poland, not secular,” and carried Christian iconography with them. Other banners such as “White Europe of brotherly nations,” “White Europe,” “Europe Will Be White,” “Clean Blood,” “Europe will be white or uninhabited,” and “Clear blood, sober mind” revealed the ideological racist perception of many organized participants. Other slogans such as “No to Islam” and “The whole Poland sings with us: f*** off with the refugees [a synonym for Muslims]” were also carried during the demonstration, revealing the Islamophobic thrust. Homophobic slogans such as “Not red, not rainbow but national Poland” marked the third pillar.

What some of these demonstrators want is clear: A racially pure Poland with no Jews, Muslims, and Homosexuals. According to many followers of this political camp, the influx of Syrian refugees into Europe was nothing but part of a conspiracy driven by Jewish financiers such as George Soros, who are collaborating with Communists in the European Union to Islamize Europe and implement Shariah law and homosexuality. Although less than 1% of the population is Muslim, the invention of the threat works, thanks to the help of active propaganda in the web that is also supported by news channels.

A “Role Model for Europe”

While the vast majority of participants came from Poland, the march also mobilized nationalist leaders from around the globe. The famous US white supremacist leader Richard Spencer, who is banned from entering 26 European countries, was originally scheduled to speak at the rally, but seems to have not been welcomed by the Polish government and subsequently did not participate. Other pan-European participants such as a representative of the Slovakian far-right argued that “Poland is the role model for Europe.” On stage he said: “It’s time for the European nationalists to unite in the fight against neo-Marxists and Islamists.” A leader of the Hungarian far-right extremist Jobbik argued that “the threat comes from Brussels, which aims to create the United States of Europe.”

In fact, in Poland, the so called “Counter Jihad Movement’ (a name used for many different organizations to refer to its anti-Muslim activities) has a long tradition. “Stop Islamisation of Europe’ (SIOE with 316,000 likes on its Facebook page) was established soon after 9/11 and organized several demonstrations throughout the country. In Poland, local mosque constructions were threatened by far-right demonstrators as well as the currently ruling “Poland’s Law and Justice Party’ (PiS). Also, ONR has previously taken to the streets to protest against Muslim immigration, the EU, homosexuality and for the preservation of Polish Catholic values. The Polish version of the English Defense League, the Polish Defence League, actively promoted and popularized the ideas of Pegida on the web. While in the past, the diversity of far-right movements did not allow it to become a strong force due to the frictions within the far-right camp, this seems to have been overcome.

But different nationalisms still divide the far-right political camp across countries. Jaroslaw Kaczynski, the leader of the ruling PiS, again demanded for reparations from Germany for their deeds during World War II. In his words: “It is not only about material funds. It is about our status, our honor … And this is not theater. This is our demand, a totally serious demand.” But while the PiS may instigate nationalist feelings that divide the European far-right, some see in it the main force in fostering this movement on the streets.

The Government’s Silence and Support

After PiS won the last parliamentary elections in October 2015, the government is seen to have declared war against liberal democracy, liberal economy and liberal society. The Hungarian model of “illiberal democracy’ showed its impact on another VisegrÃ¡d Group country and strictly followed its slogan that to the right of the PiS must be only the wall. Some critics argue that the rally has the tacit approval of the PiS, or at least that the ruling PiS has fostered the political climate in which such an organization can evolve. Hence not surprisingly, government-controlled media is full of alleged crimes committed by Muslims in Europe. The far-right dominated rally was called a “great march of patriots” by the Polish state television. The leader of a far-right movement called “Europe of the Future’ argued in 2016 with the success of PiS: “What we have been saying about Muslims and Islam for a long time became part of the mainstream. Our views are the views of most people in Poland and many politicians.” This march seems to be another approval of this evaluation.

Farid Hafez is a political scientist and Senior Research Fellow at the Bridge Initiative.