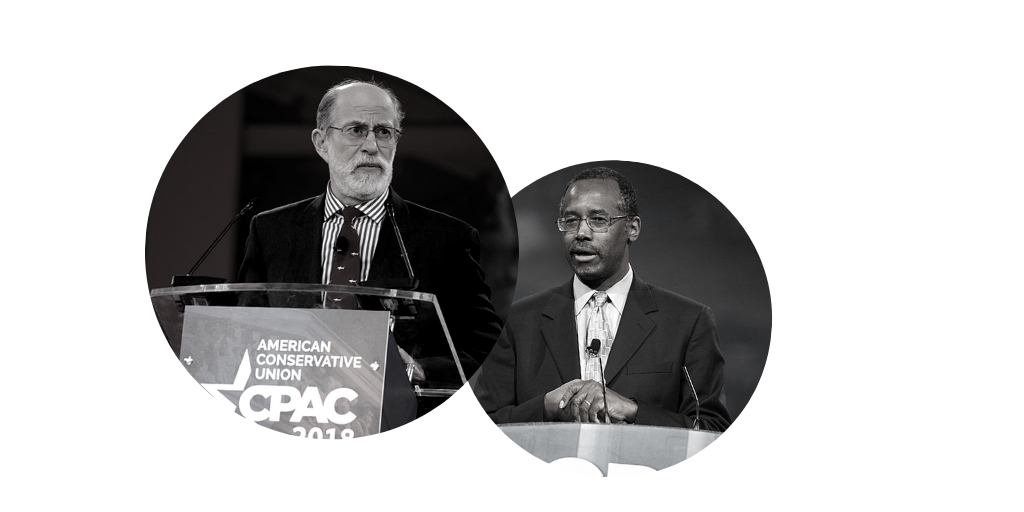 What You Need to Know

Presidential candidate Ben Carson has recently peddled a conspiracy theory about a Muslim “civilization jihad” plan to take over America. Carson gets his ideas from Frank Gaffney, who was also Donald Trump’s dubious source in calling for a Muslim ban. Gaffney says a 1991 memo written by a member of the Muslim Brotherhood is evidence of this “jihadist” plan. But Gaffney mischaracterizes the nature and use of the memo, and exaggerates the impact it has had. It was not a formal plan accepted by the Brotherhood, and it didn’t have influence in other Muslim circles. Gaffney and Carson’s claims about “civilization jihad” are baseless, but unsurprisingly appeal to Americans who are already suspicious of Muslims.

When GOP presidential candidate Ben Carson spoke in a January 2016 debate about a Muslim plan of “civilization jihad” on America, most viewers probably didn’t know that he was echoing a years-old conspiracy theory advanced by the leaders of America’s most active anti-Muslim groups.

Carson’s source for this claim is the Center for Security Policy (CSP), an organization run by Frank Gaffney that was recently designated as a hate group.

To support their theory, Carson and Gaffney point to an Arabic-language self-described “explanatory memorandum” from 1991.

The claims about the memo:

• It’s a “mission statement” that “lays out the Muslim Brotherhood secret plan for taking down our country.”

• It “describes how this ambitious goal is being pursued through a variety of stealthy techniques.”

• It is “meant as a report from [the Muslim Brotherhood’s] senior leadership here in the United States back to the mothership in Egypt.”

• It “helped get a handle on what the Muslim Brotherhood and some of these other organizations are doing.”

So is this internal memo from a quarter-of-a-century ago a secret manifesto that evidences cooperation on the part of ordinary Muslims and major Islamic organizations in America to transform the country into an Islamic caliphate, as they would lead us to believe?


No. Carson and Gaffney mischaracterize the nature and use of the memo, and exaggerate the impact it has had.

It was not a formal plan accepted by the Brotherhood, and it did not have influence in other Muslim circles. This document should not be taken seriously.

Penned in May of 1991 by a man named Mohamed Akram Adlouni, the “Explanatory Memorandum on the General Strategic Goal for the Group in North America” was discoveredduring an FBI raid of a Virginia home in 2004. The document was admitted as an exhibit to the court during the 2007 Holy Land Foundation trial, in which that group was charged with laundering money. After the trial, the document became public. But, according to a 2009 opinion by the presiding judge, the memo was not considered “supporting evidence” for that alleged money laundering scheme, nor any other conspiracy.

But what exactly does this memo propose, and how was it received or used by those it addressed?

A closer investigation reveals that Akram likely composed the memo as a follow-up to the group’s 1987 conference, proposing his vision for the group’s future. In it, he uses the phrase “civilizational jihad” and states plainly his belief that the “role of the Muslim Brother” in North America should be one of “eliminating and destroying Western civilization from within and ‘sabotaging’ its miserable house …”.

Such rhetoric is arresting. But his language is wishful, and does not reflect the Muslim Brotherhood’s agenda as outlined in documents obtained by the FBI. Asking that his memo be added “to the Council agenda in its coming meeting” in 1991, Akram frames it as a “letter” that contains his “hopes, ambitions and challenges.” In listing a number of American Muslim organizations in the appendix, he even says: “Imagine if they all march according to one plan!!! [sic].”

Harvard University professor Tarek Masoud noted this aspirational tone in his 2011 testimonybefore the House Select Intelligence Committee, and added that it seems to reflect a desire for proselytization and political activism, rather evidence of some coordinated plot.

Was Akram’s letter adopted by the council, as he hoped?

Other documents entered as evidence in the Holy Land trial indicate that even if Akram’s memo was read, it wasn’t taken up in an official way by the Brotherhood Council meeting of 1991. A report of the “most important issues” addressed in the 1991 conference — the logical place for Akram’s memo to be mentioned if it were ever considered by the group— does not reference it. And importantly, nowhere else in the public collection of Muslim Brotherhood documents from the trial is it mentioned.

It would seem that Akram’s pleas to the group to “not rush to throw these papers away,” and to “read [the pages of his letter] and to comment on them” went unheeded. There is no evidence that those whom he addressed ever took the time to “study” or “comment” on it. Akram may have been correct, then, to fear that his letter would be seen as “strange” or a “new submission without an antecedent” or “root” to what was agreed to in the 1987 conference.

Rather than “laying out” a conclusive Muslim Brotherhood-approved plan, as Gaffney and Carson would lead their audiences to believe, this document is, at most, one man’s utopian vision or, in the words of the Southern Poverty Law Center, a “fantasy.” of a single member, albeit an ominous one.

Akram’s colleagues did not adopt this memo, but did his ideas still have an impact elsewhere among Muslims? If it occupied a central place in a Muslim movement to take over America, one would think his supporters would have taken up his idea and spread it in popular and academic circles. But that’s not so.

Akram’s arguments and phrasing in Arabic are rarely found on the web and not found in Islamic doctrine or literature. While there are some Arabic news articles from the last decade reporting about the memo and reproducing the most disturbing bits of Akram’s language, his ideas are not widespread online.

In what appears to be linguistic coincidence, the phrase “civilizational jihad” appears once online in 2003 in a question-and-answer section to a message board post about  the Palestinian-Israeli conflict. There is no mention of Akram, the Muslim Brotherhood, or their 1987 conference. This usage is one of only six total websites that come up in Google Arabic archives from 2008 to today. Only three sites use the phrase as Akram intended: one is a news article about Akram’s memo, one is a short post where the phrase comes up in a Q&A (mentioned above), and the last is another blog that quotes the previous one. Five of the six sites use the phrase specifically in the context of the Palestinian-Israeli conflict — not at all mentioning the United States or a plan involving it.

In an English archival Google search of the translations of the key concepts from Akram’s memo, 66 pages that reference the document came up. However, the vast majority of the references were news reports about the 1991 memo or the Holy Land Foundation trial and were largely written by anti-Muslim sources advancing Gaffney’s conspiracy theory. A handful of pieces about the memo that were written by Muslims condemn it and Gaffney’s subsequent conspiracy. Furthermore, each of the key concepts in Akram’s memo, including “civilizational jihad” and “settlement,”  were identified by machine analyzers as “unusual” when compared to a list of common Arabic words and phrases found in publicly-available online media.

Akram’s language doesn’t come up in mainstream Islamic literature, either before or after he penned the letter.

We ran the letter’s key phrases (“civilizational jihad,” “settlement” and “destruction of the West”) through arabiCorpus, a linguistic analysis tool that searches through a database containing over 30 million words from Arabic literature and Islamic texts spanning several decades through  2012.

No mentions of Akram’s phrase “destruction of the West” or variants appear anywhere in the collection. “Civilizational jihad” and its variants were mentioned only once in the entire collection. It is referenced in a text about the Palestinian-Israeli conflict, and makes no reference to the West or any other Islamic topics. “Settlement” came up more often —123 times, but only three of those instances have some reference to “jihad.” All others are again about the Palestinian-Israeli conflict or the personal “internalization” of religious ideal, not, a stealthy way of Islamizing a society.

This analysis demonstrates the infrequent use of Akram’s phrasings — and therefore the ideas they describe. The findings underscore the inconsequential nature of Akram’s letter for ordinary Muslim communities and Islamic organizations the world over.

The facts about the real nature of this letter and its lack of impact in the years since it was written undermine Gaffney’s conspiracy theory. So why would the Center for Security Policy continue to promote this baseless narrative, and why would the once-leading GOP candidate Ben Carson adopt it for use in national political speeches?

For Gaffney and his group, this document lends legitimacy to their pre–existing conspiracy theory about a stealth jihad to take over America. It’s a red herring that has  — until now — allowed them to deflect accusations that their theories are simply wild conjectures.

It’s news to few that drumming up fear about Muslims yields large donations and high salaries. The Center for Security Policy brought in over four million dollars in the first decade of the millennium, as Gaffney (who himself was paid more than $200,000 in fees in 2011 alone) promoted this conspiracy theory regularly in conservative media.

What’s more, in a climate where maligning Muslims has been shown to pay off politically (both in the polls and in terms of campaign fundraising), Ben Carson seems to have decided that adopting Gaffney’s cause célèbre about the 1991 epistle would appeal to an electorate that is already largely suspicious, if not fearful, of Islam and Muslims.

The Islamophobic Network In January this year, Texas Republican Senator Ted Cruz introduced a bill for the second time to designate the Muslim Brotherhood as a terrorist organization. Sen. Cruz was mainly guided in this... read the complete article