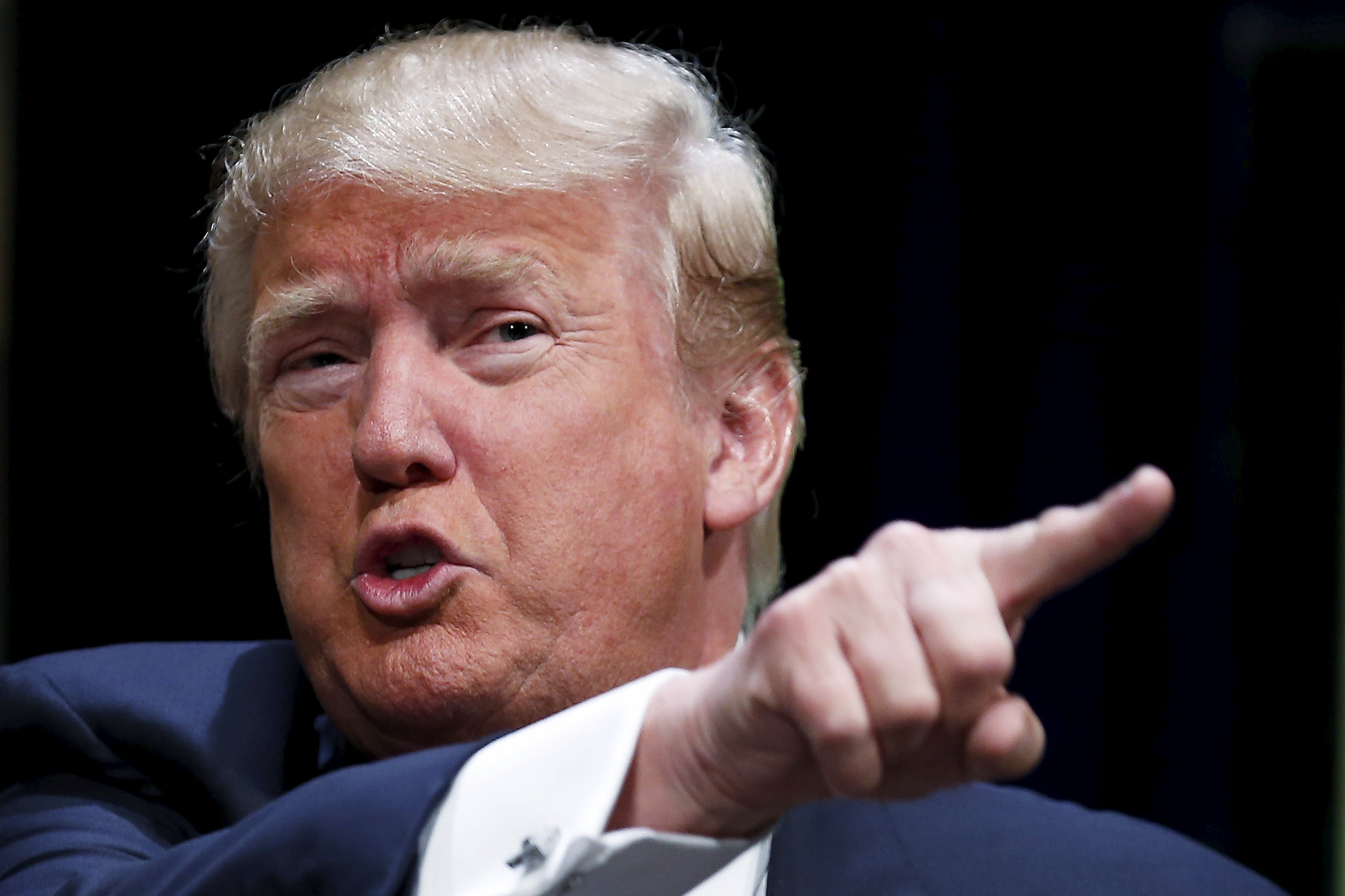 In a press release today, GOP frontrunner Donald Trump called for a “total and complete shutdown of Muslims entering the United States until our country’s representatives can figure out what is going on.”

His statement also cites a deeply flawed poll conducted by the Center for Security Policy (CSP), a group with a history of fear mongering about Islam and Muslims.

In June, when the poll was released and circulated widely on networks like Fox News, we debunked its findings, writing:


This survey should not be taken seriously. It comes from an organization with a history of producing dubious claims and “studies” about the threat of shariah, and was administered using an unreliable methodology. Its proponents seize upon its shoddy findings, exaggerating and misrepresenting them to American audiences, and falsely claim that the survey data represents the views of Muslims nationwide.

Donald Trump is only the latest proponent of CSP’s dubious claims. In an interview with MSNBC, Saba Ahmed recounted how GOP presidential candidate Ben Carson told her that Frank Gaffney, CSP’s director, advised him on issues related to Islam. Numerous other GOP candidates, like Ted Cruz and George Pataki, have attended and spoken at CSP’s national summits.

Trump’s comment about banning Muslims is only the latest in a series of troubling remarks about Muslims made by Trump and other GOP presidential candidates. These comments are documented in our “Islamophobia and the 2016 Elections” resource.

On June 24, 2015, the Center for Security Policy (CSP), a Washington, D.C. think tank run by former Reagan official Frank Gaffney released a survey of 600 Muslims living in the United States. Its takeaway, captured in a headline on the CSP website, is this: “Poll of US Muslims Reveals Ominous Levels of Support For Islamic Supremacists’ Doctrine of Shariah, Jihad.”

The poll gained quick traction online and in the media. On the evening of its release, Fox News host Bill O’Reilly also lent credence to its findings and cast doubt upon American Muslims’ loyalty to their country.

Among the poll’s findings are:

But this survey should not be taken seriously. It comes from an organization with a history of producing dubious claims and “studies” about the threat of shariah, and was administered using an unreliable methodology. Its proponents seize upon its shoddy findings, exaggerating and misrepresenting them to American audiences, and falsely claim that the survey data represents the views of Muslims nationwide.

Here are the details.

In recent years, many groups have raised questions about the objectivity and intentions of Frank Gaffney. His tendency to posit conspiracies about Barack Obama and the Muslim Brotherhood is well documented, and has earned him sharp critique across the political spectrum. The Center for American Progress labels him a “misinformation expert,” while the Conservative Political Action Committee banned him from their 2011 conference for peddling false accusations about GOP connections to Muslim extremists. It was his organization, CSP, that was behind the unfounded rumor that Hillary Clinton’s chief of staff, Huma Abedin, was linked to the Muslim Brotherhood, and once floated the false idea that General David Petraeus had “submitted” to shariah.

Since the early 2000s, CSP has generated dozens of occasional papers, blogs, and reports that fixate on shariah or other allegedly nefarious topics related to Islam. Often, they are loosely sourced or entirely unsubstantiated, relying instead on a furtive web of connections or, in one case, a 24-year-old document written by a lone Muslim activist that has since been roundly discredited.

Both Gaffney and O’Reilly claim that the poll’s findings are representative of nationwide Muslim public opinion. But this assertion is untrue.

CSP’s survey was a non-probability based, opt-in online survey, administered by the conservative group, the Polling Company/Woman Trend, a small Washington-based agency that has collaborated with CSP on other occasions to produce surveys about Islam and Muslims. (We learned this after reaching out to the Polling Company to get more details about their methodology, which wasn’t released to the public when Gaffney began promoting the survey’s findings.)

According to the body that sets ethical standards for polling, the American Association for Public Opinion Research(AAPOR), opt-in surveys cannot be considered representative of the intended population, in this case Muslims. The AAPOR says that in these cases, “the pollster has no idea who is responding to the question” and that these kind of “polls do not have such a ‘grounded statistical tie’ to the population.”

So when O’Reilly and guest Zuhdi Jasser pointed to this survey and made claims about what “25% of three million, which is hundreds of thousands of Muslims” believe, it’s not only a misleading statement—it’s outright false.

Another problem with this poll is the way that questions and answers are phrased. Often, they are not neutral but are imbued with assumptions, and replicate, in an interrogative form, statements that Gaffney and CSP have declared as fact for years. In one question, respondents are asked: “Do you believe the Muslim Brotherhood in America accurately represents your views?” Packed into this question is the assertion that the Brotherhood indeed exists in the United States — something that Gaffney has long propagated. Those who answer “yes” confirm his suspicions, while those who answer “no” acknowledge nonetheless that the group is present here. They’re put into a lose-lose situation.

In several questions that are asked about shariah, the content of what shariah actually is remains unexamined. Even when Gaffney’s survey appears to be more nuanced by asking Muslims how they would “characterize shariah,” it only offers options about how broadly sharia—whatever it is—should be applied. Answers ranging from “guide to the personal practice of Islam” to Gaffney’s preferred option (“the Muslim God Allah’s law that Muslims must follow and impose worldwide via jihad”) still don’t allow Muslims to express about what they believe about shariah.

Respondents’ likely answered questions on shariah based on their understanding of the concept, but those views were not measured in the survey, nor communicated to the Fox News audience. Instead viewers are left to believe that Muslim Americans support shariah as Gaffney and O’Reilly have portrayed it for years: a “brutally repressive” law hostile to non-Muslims. At the end of the day, Gaffney and O’Reilly make it look like Muslims support things they actually don’t.

Sixty-percent of respondents agreed that “shariah as interpreted by Islamic authorities is compatible with the U.S. Constitution, including freedom of speech and other rights,” and 51% chose this definition of jihad: “Muslims’ peaceful, personal struggle to be more religious.” These rare but helpful nuances are not even alluded to in the promotion and coverage of the survey’s findings in conservative outlets like Fox News.

O’Reilly also makes exaggerations that the already-flawed data doesn’t support. “Fifty-one percent [of Muslims] say sharia law should be the reigning law,” he said. But that language is nowhere in the survey data he’s likely referencing, which says that “a majority (51%) agreed that ‘Muslims in America should have the choice of being governed according to shariah.’”

Despite its unreliability, the survey and its findings have spread quickly, with generalizations about American Muslims ricocheting across the Internet and social media, and bleeding into more mainstream outlets. Unfortunately, the general public is not equipped with the tools or knowledge to dissect such claims and is left to accept them at face value. This is especially so when they’re touted by a trusted personality, like Bill O’Reilly, and confirm pre-existing beliefs about Muslims.

Though the public may not see it, the problems with this poll are numerous: CSP has a history of fabricating fear about Islam and Muslims; the survey’s questions and answers are loaded with bias; and its creators and proponents falsely claim that its findings represent the views of all American Muslims.

A New Era in American Politics: The Trump Administration and Mainstream Islamophobia

A New Era in American Politics Abstract This report analyzes how far-right Islamophobic discourse has been mainstreamed with the election of President Donald J. Trump. Through qualitative research examining the rhetoric employed by the Trump... read the complete article