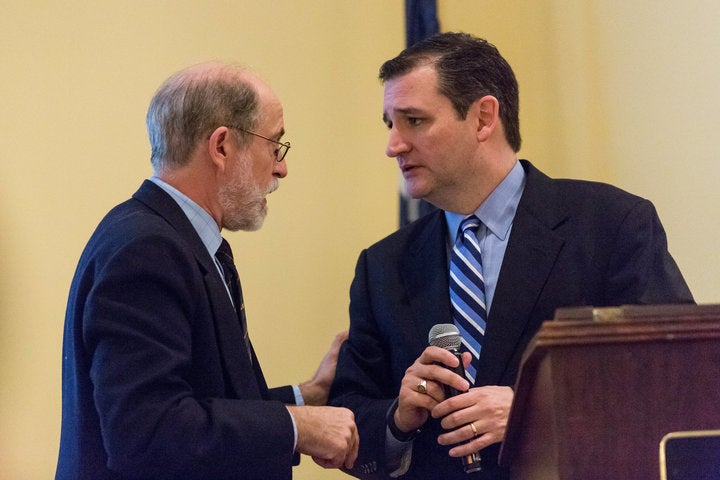 In January this year, Texas Republican Senator Ted Cruz introduced a bill for the second time to designate the Muslim Brotherhood as a terrorist organization. Sen. Cruz was mainly guided in this affair by Frank Gaffney, the leader of the well-funded Center for Security Policy, which is recognized by the Southern Poverty Law Center as an anti-Muslim hate group. The conservative think tank, which was founded in 1988 has been the main driver of the “creeping Sharia” conspiracy theory, which resulted in the introduction of 194 anti-Sharia bills between 2010 to 2016, out of which 39 have been introduced  and 18 have been enacted  into law, as a recent study by the Haas Institute at UC Berkeley has found out. Gaffney was also likely the source for Trump’s call for a Muslim ban. Gaffney’s conspiracy theories on the Muslim Brotherhood have gained traction in the Trump White House too. Already in 2012, he had published a 10-part video titled ‘The Muslim Brotherhood in America: The Enemy Within’, where he argues that the Muslim Brotherhood is engaged in the “infiltration of our civil institutions and government.”

But while people like Gaffney are the hardliners, there are softer players with a more academic profile like Lorenzo Vidino, director of the program on extremism at George Washington University and author of The New Muslim Brotherhood in the West (Columbia University Press, 2010). With his more academic voice, he does not exaggerate the conspiracy of a Muslim Brotherhood aiming at conquering the world as much as Gaffney does, but he nevertheless spreads suspicious facts about the Muslim Brotherhood. The Muslim Brotherhood is one of his central focuses of his academic career. He is repeatedly invited by right-wing politicians to present assessments on US-American Muslim organizations and whether to qualify them as Muslim Brotherhood or not. During Rep. Sue Myrick’s (R-N.C.) 2011 Hearing on the ‘Muslim Brotherhood Threat’, his evaluation clearly served her ideological purpose. As civil rights lawyer professor of law at Georgetown University Arjun Singh Sethi said, calling the Muslim Brotherhood a terrorist organization would inevitably hurt all American Muslims, since the executive order on the Brotherhood was nothing but an attempt to silence dissent and terrify US American Muslim communities. As the Network Against Islamophobia (NAI), a project of Jewish Voice for Peace, argued, the Trump Administration could easily “use this legislation and Executive Order to target national and local Muslim civil liberties and other organizations that work on behalf of Muslim communities.”

But neither is this network, nor the attempt to criminalize mainstream Muslim institutions and voices a genuine tendency of a New McCarthyism. Rather, this network has been working on a supranational level for some time. While Sue Myrick warned of Muslims being a fifth column, Vidino as a university scholar is much more careful in his assessments.

He is Senior Policy Advisor for European Foundation for Democracy (EFD), where he regularly advises governments on Islamism including representatives of France, Germany, Italy, Spain and Switzerland. The EFD is also connected to the US-based Foundation for Defense of Democracies (FDD), to which Frank Gaffney was also connected in the past as well as Sebastian Gorka, who was until recently one of Trump’s most controversial Islamophobic advisers . Both EFD und FDD work are members of Coalition Against Terrorist Media (CATM), which was founded by FDD. Also the Islamophobic ‘American Islamic Forum for Democracy‘ is part of CATM and – according to CAIR’s Islamophobia Report – belongs to the inner core of the Islamophobic network. Vidino together with other team members of the Foundation is busy identifying important mainstream voices as belonging to the Muslim Brotherhood. So is another senior fellow of the Foundation, Valentina Colombo, who accuses Ayman Mazyek from the Central Council of Muslims in Germany (ZMD) of being a voice of the Brotherhood. The Brotherhood’s goal would be to “fully integrate in the institutions, gain power and make political Islam the political interlocutor.” The message behind it is clear: Muslims shall have no political identity. Another EFD fellow Swiss Yemeni Elham Manea focuses on the reform of Islam itself and argues that Islam has to be fundamentally reformed. What does she mean by that? She argues that Muslims claiming their own rooms of prayer was part of an Islamist agenda. Also other team members of EFD like Ahmad Mansour follow a similar agenda and speak out against mainstream Muslim organizations. The strategy of criminalization works, as shows the long-time campaign against Sweden’s former Housing Minister, Mehmet Kaplan, which led to his stepping down. Before he served parliament, Kaplan was the spokesperson for the Muslim Council of Sweden (SMR). With the help amongst others of accusing that the SMR would share the ideology of the Egyptian Muslim Brotherhood, Kaplan was put under pressure to leave his office. Recently, a new report on “The Muslim Brotherhood in Austria” has been published by Lorenzo Vidino, in which he accuses the most important Muslim voices as having “some ties to the Brotherhood”. And the Brotherhood, according to him, endangers social cohesion. As examples in Germany, where very active and dedicated young Muslims have set up a number of creative projects shown, the more active people are, the more easily they are accused of being associated with the Muslim Brotherhood.

Clearly, with Vidino’s flexible definition of who belongs to the Brotherhood, not only are members called out, but every potentially relevant Muslim activist in the broadest sense is potentially under attack, from the president of the Islamic Council to the only Muslim representative in the Viennese Council with a link to the Muslim community.

More important: Vidino’s report serves to target potentially every Muslim organization. While Vidino from a distance in Washington D.C. and Brussels is only giving hints, his commentators back in Austria are speaking out more openly to ban the Muslim Brotherhood in Europe and and thus allow investigation of anyone allegedly associated with this group. With this broad definition, they clearly target most Muslim institutions and hence Islam itself.

Farid Hafez is a political scientist and Senior Research Fellow for Bridge Initiative at Georgetown University.

On January 11, 2017, Texas Republican Senator Ted Cruz introduced a bill to designate the Egypt-based Muslim Brotherhood a Foreign Terrorist Organization (FTO). This is not Cruz’s first attempt to see the Muslim Brotherhood added to... read the complete article

If anything is part and parcel of American democracy, it’s the idea that voters can, and should, communicate their ideas and concerns to the members of Congress who represent them. On Monday, April 18, 2016,... read the complete article