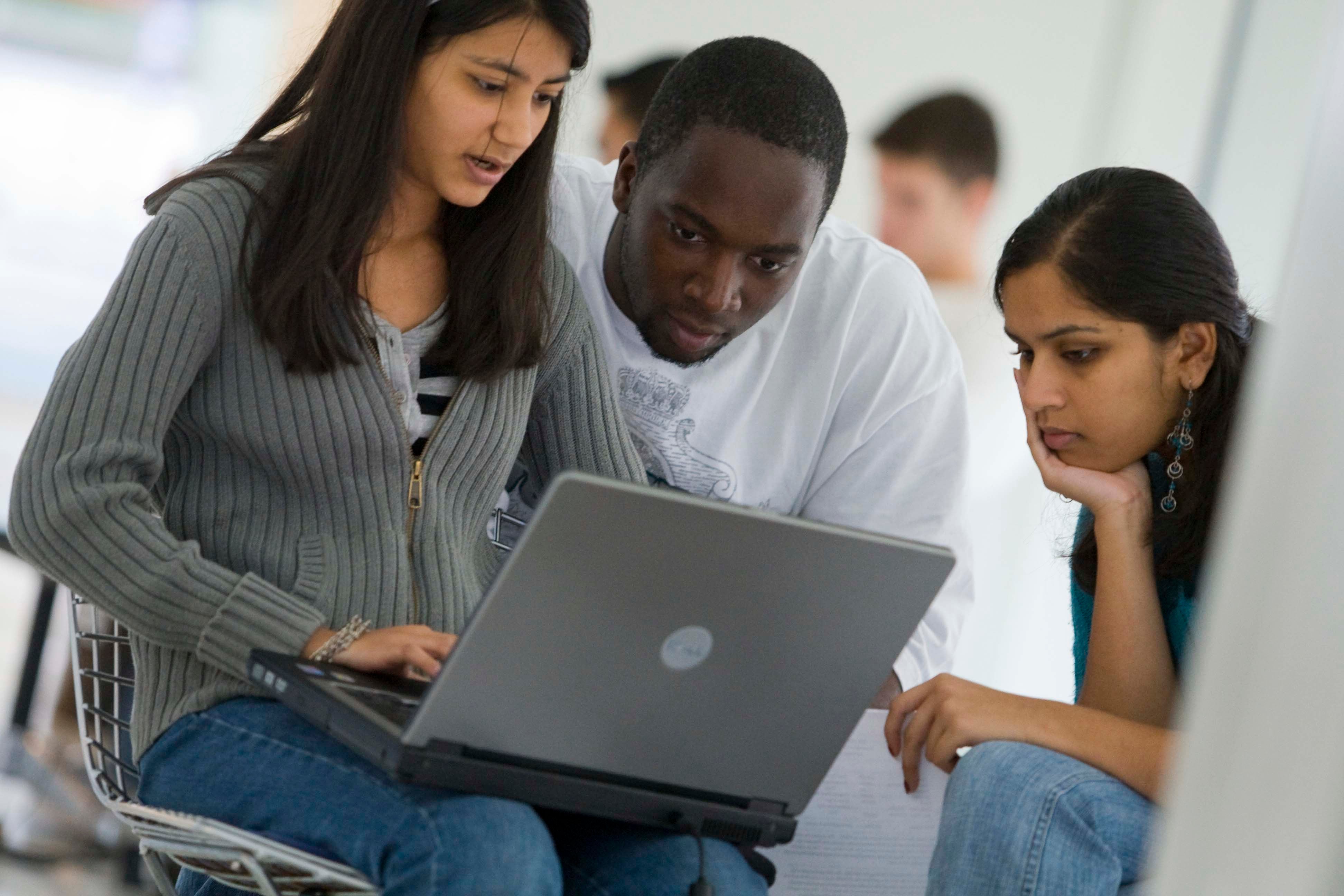 Over the last year, the United Kingdom’s terrorism prevention program, Prevent, has received much attention from journalists, politicians, and civil rights advocates on both sides of Atlantic who have raised concerns about its impact on Muslims’ civil rights. Many across the pond also worry about the program’s impact in the United States. So when we came across the online public servant training portal for Channel, a component of Prevent, we decided to take a closer look.

The first step in the Prevent program, Channel is described as “a process for safeguarding individuals by assessing their vulnerability to being drawn into terrorism.” It intends to “divert people away” from potential terrorist activity. This process is initiated by school teachers and other public servants who are required by statute to refer students or other individuals to Prevent law enforcement if they suspect the person could be “drawn into terrorism.” (After the referral is made, the Prevent officer determines whether a multi-agency panel of various community actors will come together to address the individual’s specific case. Referral does not mean the person will be prosecuted.) The online training is intended to give teachers and other public servants the knowledge they need in order to carry out this terrorism-prevention function.

We went through the online training like any British teacher would. As we clicked from slide to slide, reading the content and looking at the accompanying photographs, we noticed that the creators of the training had made a concerted effort to challenge the notion that Muslims are the primary perpetrators of terrorism, or that Islam is inherently tied to terrorist violence.

“Do we stereotype when we think about potential terrorists?”

The answer to this rhetorical question, which appears near the start of the training session, seems to be yes, because immediately following the query is a photo of a dark-skinned woman, wearing a black headscarf and looking sullen. “There isn’t a single profile of someone who may be at risk of being drawn into terrorism,” the slide says, seeming to acknowledge and directly challenge the stereotype about Muslims and terrorism that many of the portal’s users may have.

Later in the session, after a number of fictional case studies about individuals’ “radicalization” factors are presented (which we’ll discuss below), we again meet the woman in the black headscarf. The slides tell us that Rabiya is an 18-year-old student who has recently “become more devout” and starting wearing hijab. While she used to go to nightclubs, she “now spends her free time reading from the Qur’an and Islamic texts” and “has rediscovered her faith and is trying to become a better Muslim.”

After presenting Rabiya’s story, the slide asks, if you were a staff member at her school, “would you refer Rabiya to Channel?”

The correct response the training provides is an extended “no”:

“Rabiya’s change in appearance and her increased devotion to her religion do not necessarily make her vulnerable to radicalization. There is a big difference between being religiously observant and holding extremist views. Rabiya is reconnecting with her religion by becoming more devout. Whilst she is engaged in her faith she is not showing signs of susceptibility to radicalization or becoming involved in terrorist-related activity. This would be considered an inappropriate referral to the Channel process…”

Channel seems to provide this example to reiterate that this program is not meant to single out Muslims, and to underscore the point that becoming more religious does not cause one to be more violent. But Rabiya isn’t the only Muslim character to appear in the Channel presentation. In the case studies that feature other Muslims, stereotypes about Muslims still abound.

One of the most common stereotypes about Islam is that Muslim men (and Islam as a religion) are oppressive to women. In a training session meant to help British public servants identify potential terrorists, we didn’t expect to encounter this trope about women. But it came up in the first case study, which focused on a Muslim grade school student named Zayn and his mother.

After tracing fictional Zayn’s story of learning disability, bullying, increased time online, and his desire to “learn to fight to ‘help his brothers and sisters who are being murdered’” in Syria, the slide informs us that Zayn’s mother also recently left her husband “because he used to beat her.” Whether or not the creators of Channel intentionally included a storyline about an abusive husband in the Muslim character’s story is less important. Regardless, including this aspect to Zayn’s story reinforces “common anxieties” — as Islamophobia and religion expert Peter Gottschalk would put it — about “oppressed [Muslim] women” that pervades both news and entertainment media.

Stereotype 2: Muslims are aggressive and irrational

Another common trope about Muslims is that they’re aggressive and irrational. This stereotype was on display in the Channel training’s second case study about a 34-year-old Afghan asylum seeker named Geedi.

We learn that Geedi “has made a number of verbal threats toward staff members at the housing office” and “become more aggressive toward staff at the accommodation unit…” The slides for this section show images of Geedi looking angry and intense.

Geedi’s apparent impatience and aggression doesn’t get the same kind of treatment as Callum’s belligerence, which is presented in the third case study. A white British man, Callum is also a sinister, and perhaps aggressive individual, but his condition is explained by psychological problems he developed from time served in the military. We learn that he is schizophrenic, not taking his medication, and that though he has “thoughts telling him to hurt people, ‘he knows it’s wrong.’” Callum’s situation is treated with more compassion than Geedi’s.

The slides explain Callum’s extenuating circumstances and gives him a moral compass, while Geedi is not afforded the same kind of contextualizing information in his portrayal. On the contrary, his attitudes and behaviors are portrayed as intrinsic to his Afghan, Muslim identity.

Stereotype 3: Muslims are intolerant of non-Muslims

Embedded in Geedi’s story is another stereotype about Muslims: that because of their religion, they’re intolerant of non-Muslims.

We learn that Geedi “refers to the housing office staff as non-believers” and that “accommodation staff have also found boxes of extremist leaflets in Geedi’s room which call for the overthrow of Western democracy and to ‘Beware the Kuffar [unbelievers].’”

An expert on stereotyping, Peter Gottschalk explains that one common “dynamic of intolerance” is actually accusing the other of intolerance, and blaming it on their religion. Tied to this is also the perception that “religion is all that matters them,” in this case Muslims. We see that dynamic clearly at work the portrayal of Geedi, who seems to only make decisions based on his interpretation of Islam.

The treatment of Geedi’s character is also reminiscent of an unfounded but oft-discussed claimabout Muslim refugees and asylum seekers: that they hate the West and want to transform it into a society like the one they came from in the Middle East or South Asia. This idea, however, doesn’t hold water: those coming to Europe do so because they think the new society will serve their needs better than the countries from which they came.


The stereotypes are just the tip of the iceberg

These stereotypes about Muslims were not the only unfortunate aspects of the Channel training that we discovered.

Though the training seems to criticize Islamophobic views — like when one at-risk character talks about wanting to kick “Pakis” out of a community center — it also seems to trivialize Geedi’s claim that he’s being treated differently because he’s Muslim. In a climate of heightened Islamophobia, when Muslims are targets of discrimination, it’s unhelpful and potentially harmful to portray complaints about anti-Muslim discrimination as something only a potential terrorist would voice.

Other concerning aspects about Channel are important to mention here:

Despite the government’s claims that Muslims are not the main targets of the program, statistics show that Muslims are many times more likely than other Brits to be referred through Channel. Though they only make up 5% of the population of the kingdom, they make of over half of those referred, a fact that raises questions about the training’s ability to undermine user’s stereotypes about Muslims and violence. 80% of the referrals that Channel receives get thrown out, an indicator of this training’s failure at properly advising teachers and others. Prevent’s focus on Muslims also becomes apparent in information about Prevent’s funding. Funding for Prevent’s implementation varies by region depending on how many Muslims are located there.


Coming across the pond?

Critics say that these aspects of Channel, and its parent, Prevent, should be concerning to all Brits, even though Muslims are those most affected now. Many across the pond also worry about the program’s impact in the United States. As The Intercept recently reported, the FBI’s new “Shared Responsibility Committees” (SRC) are modeled off of Channel. As Murtaza Hussain and Jenna McLaughlin describe, the program would have “social service workers, teachers, mental health professionals, religious figures, and others interdict young people they believe are on a path toward radicalization. Arun Kundnani says that the FBI’s SRCs “suffer from the same problems, such as drawing non-policing professionals into becoming the eyes and ears of counterterrorism surveillance, and thereby undermining professional norms and relationships of trust among educators, health workers, and others.”

In the current American political climate, when the wave of Islamophobic attitudes seems to be cresting, Americans should take a critical and close look at this new FBI program and its British predecessor.

The Countering Violent Extremism (CVE) programs are based on false premises that end up targeting American Muslims and stigmatizing the community as inherently suspect. read the complete article

These tropes are not only found on anti-Muslim blogs online, but also in news and entertainment media. They can also be manifested in political speech and can serve as assumptions underlying government policy.  read the complete article

Earlier this year, we wrote about controversial efforts being made in the UK to “prevent people from being drawn into terrorism,” even primary school students. In May, school children in districts with higher-than-average Muslim populations... read the complete article