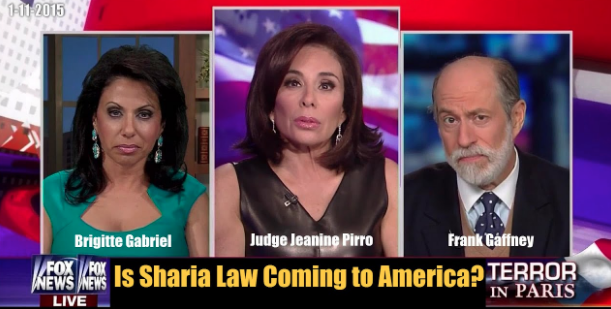 “Think about it. Omar wears a hijab, which according to the Quran 33:59, tells women to cover so they won’t get molested. Is her adherence to this Islamic doctrine indicative of her adherence to sharia law which in itself is antithetical to the United States Constitution?”

The Fox contributor is just one of many individuals and organizations that have built and sustained an anti-Muslim narrative that views Muslims as inherently suspect and a threat to the U.S. Pirro’s views are not on the fringe, as manufacturers and peddlers of anti-Muslim conspiracy theories have advanced these hateful views into the mainstream; this is most visible within the Trump administration that has pushed forth discriminatory policies and maintained close relationships with individuals identified as being part of the Islamophobia network.

For those who have observed the growing Islamophobia in the U.S., the Fox personality’s anti-Muslim comments come as no surprise. Disinformation about Muslims, and in this case specifically Sharia, has long been promoted by the network. Fox has given airtime to a number of anti-Muslim voices who’ve made a profitable career out of promoting Islamophobia.

Muslims generally regard Sharia as an ethical and moral code to live by. It is not a book or a set of legal rulings; rather, it is considered divine guidance, which is interpreted by humans and laid out in a body of work called Fiqh. Through intentional mischaracterizations and lies, anti-Muslim voices portray Sharia as a “monolithic legal system” that is not only antithetical to the U.S. Constitution but also seeks to overthrow it, which is where the “creeping Sharia” chronicle originates.


The man behind the “anti-Sharia movement,” attorney David Yerushalmi, has pushed forth anti-Sharia or “foreign law” legislation in state legislatures across the country. In April 2018, the HAAS institute for a Fair and Inclusive Society at UC Berkeley found that 216 bills had been introduced in 43 state legislatures that sought to ban “Sharia law” from being considered in US courts. The Institute concluded that the “bills were put forth with the intention to exacerbate an already-hostile climate of fear of Muslims and to further institutionalize and legalize their exclusion from society.”

Much of the grassroots support for this legislation comes from ACT for America, headed by anti-Muslim activist Brigitte Gabriel. In 2007, Gabriel told the Department of Defence’s Joint Forces Staff College, that “a practicing Muslim who believes the word of the Koran to be the word of Allah, who abides by Islam, who goes to mosque and prays every Friday, who prays five times a day—this practicing Muslim, who believes in the teachings of the Koran, cannot be a loyal citizen to the United States of America.” While many may be quick to write off her views as peripheral, Gabriel has been a repeat invitee on Fox. To further highlight her influence, she met with Donald Trump and publicized her visit to the White House in 2017. Additionally, despite being identified as the nation’s largest anti-Muslim hate group, numerous politicians and government officials have been associated with ACT, including Secretary of State Mike Pompeo, Senator Ted Cruz, and former U. S. National Security Advisor Michael Flynn.

Fox has become a national mouthpiece in advancing anti-Muslim conspiracy theories, including the idea of a “Sharia” takeover. A frequent guest on the network is Frank Gaffney who heads the Center for Security Policy, and is one of the strongest purveyors of disinformation about Islam and Muslims.

In a 2011 appearance on Fox Business, Gaffney called Sharia a “seditious program,” claiming that the “vast majority of mosques” in the U.S. are “promoting Sharia” and “its triumph worldwide, including in this country.” In 2015, Jeanine Pirro had both Gaffney and Brigitte Gabriel on a Fox segment entitled “Is Sharia Law Coming to America?” During the segment, Gaffney described Sharia as an “Islamic supremacist program,” and claimed then-President Barack Obama was “trying to enforce Sharia blasphemy laws.” Gabriel added that “with the rise of Islamic immigration we are starting to see the introduction of Sharia law.”

During the segment, Pirro referenced the “no-go zones” conspiracy theory, which Gaffney immediately jumped on insisting that no-go zones exist in Europe, and are comprised of areas that are “ruled by Sharia where authorities do not go to because it is too dangerous.” This no-go zones myth has been fact-checked and debunked numerous times.

Ultimately, Fox has trafficked in anti-Muslim hate. The most-watched cable news network in the country is home to Islamophobic conspiracy theories, disinformation, and dangerous allegations that feed the growing climate of hate. Pirro’s outrageous statements are not an anomaly; they are completely in line with what the network promotes. Fox serves as a megaphone to an echo chamber of voices and groups, who have made a lucrative career out of promoting wild and false allegations for decades in an effort to instill fear and panic within the wider public. Fox may have condemned Pirro’s comments but its precedents of mainstreaming anti-Muslim hate indicate that the former Judge’s words are right on brand.