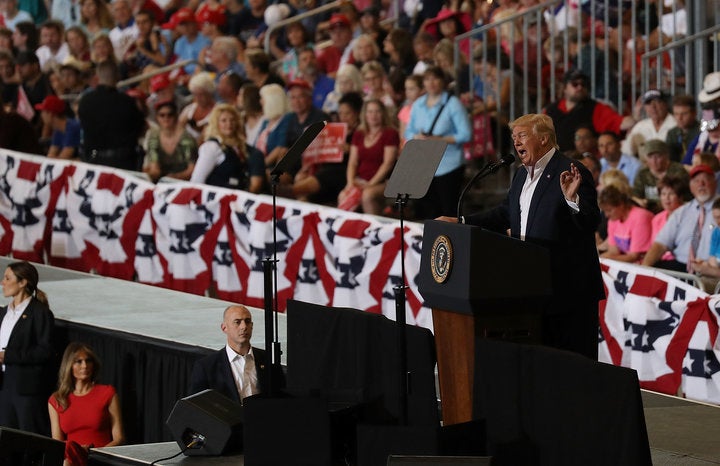 MELBOURNE, FL – FEBRUARY 18: President Donald Trump speaks during a campaign rally at the AeroMod International hangar at Orlando Melbourne International Airport on February 18, 2017 in Melbourne, Florida. President Trump is holding his rally as he continues to try to push his agenda through in Washington, DC. (Photo by Joe Raedle/Getty Images)

It’s been just over two years since then-candidate Donald Trump called for a “total and complete shutdown of Muslims entering the United States.” It’s not quite 11 months since his administration first announced the institution of a travel ban on visitors from several majority-Muslim countries. And it’s been two weeks since the president took time out from the debate over the Republican tax bill to share a series of violent anti-Muslim videos on Twitter. Indeed, Trump has used Islamophobia throughout his short political career, spreading hate and misinformation about Muslims to stoke his base and attack his opponents. Unsurprisingly, hate crimes targeting Muslims in the U.S. have risen two years running.

Here, for people of conscience who are concerned by the growth of Islamophobia in the U.S., are ten of the worst lies told by Donald Trump about Muslims:

But there was no terror attack in Sweden. It simply never happened.

During the second presidential debate between Trump and Hillary Clinton, a Muslim woman asked Trump how he would help millions of Muslims in the U.S. overcome the stereotype that they pose a threat. Trump responded by referring to the December 2015 San Bernardino shooting and insinuating that Muslims knew about the attack beforehand:

“In San Bernardino, many people saw the bombs all over the apartment of the two people that killed 14 and wounded many, many people… Muslims have to report the problems when they see them,”

Both the Los Angeles Times and Washington Post found that there was “no evidence” to support Trump’s claim.

In August 2017, Trump bizarrely tweeted: “Study what General Pershing of the United States did to terrorists when caught. There was no more Radical Islamic Terror for 35 years!”

According to Time, this tweet referenced a false story that Trump told at rallies more than once on the campaign trail. Trump claimed that during the Moro rebellion in the Philippines, U.S. General John “Blackjack” Pershing executed captured Muslim insurgent prisoners with bullets dipped in pig’s blood.

Notwithstanding the fact that executing captured prisoners is a war crime, the general conclusions from all experts was that Trump’s story was bogus, implausible, and an insult to the memory of an American hero.

“I’ve never met an American officer who would carry out an order to commit an atrocity like this [war cime],” David French wrote in National Review.

A New Era in American Politics: The Trump Administration and Mainstream Islamophobia

A New Era in American Politics Abstract This report analyzes how far-right Islamophobic discourse has been mainstreamed with the election of President Donald J. Trump. Through qualitative research examining the rhetoric employed by the Trump... read the complete article

Let us imagine if we woke up one fine Sunday morning to hear the news of a bombing at a Minnesota church full of white blond-haired parishioners preparing to begin their morning prayers. If that hypothetical scenario did... read the complete article