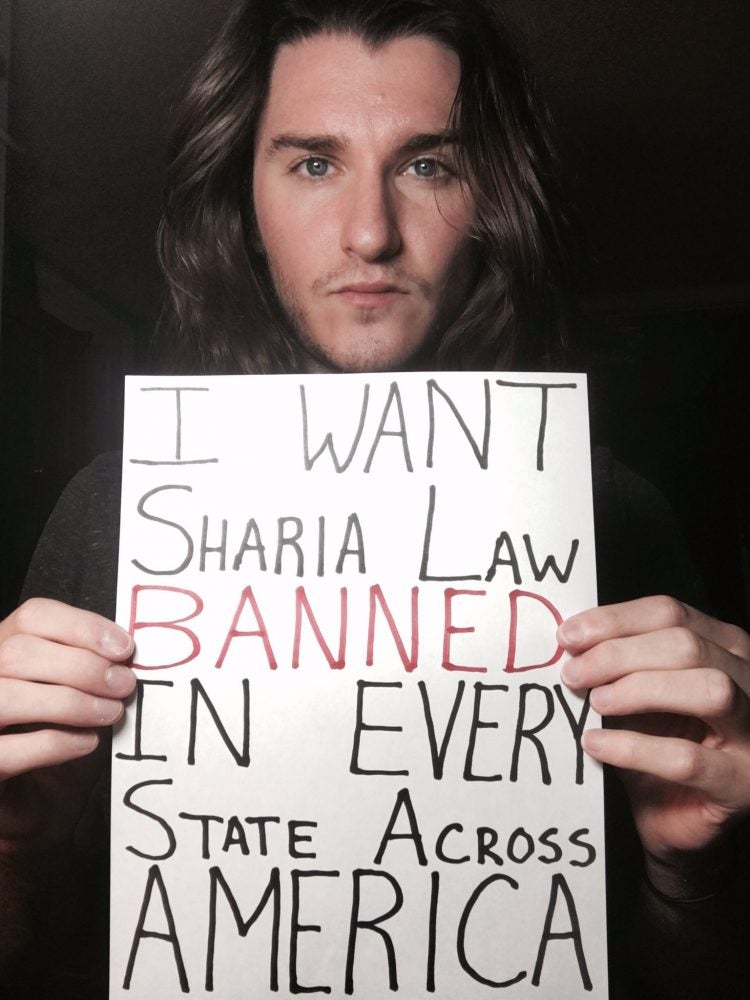 Scott Presler Ryan, the lead organizer for the March Against Sharia to be held on June 10, 2017 in 27 U.S. cities across the country.

On June 10, 2017, ACT for America will host a series of marches “against sharia” in 27 cities across the United States. To many Americans — for whom sharia is synonymous with violence, oppression, and intolerance — these rallies will seem appropriate efforts to promote human rights and civil liberties. In reality, however, these protests are motivated by Islamophobia. They are organized by an anti-Muslim group, and are an attempt to further entrench and legitimate myths about sharia, “Islamic law,” and thus Muslims everywhere.

ACT, described by the Southern Poverty Law Center (SPLC) as “the largest anti-Muslim hate group in the United States,” identifies itself as the “NRA of national security.” It claims a membership of 525,000 individuals with hundreds of chapters nationwide. On its website it boldly declares that no other organization “has done more to combat the threat of violence” from movements like “radical Islam.”

The organization’s founder and chairperson Brigitte Gabriel has been described as “the most influential leader in America’s increasingly influential anti-Islam lobby,” and is a frequent public speaker appearing at rallies, conferences, and in the media. Gabriel has claimed that a “practicing Muslim, who believes in the teachings of the Koran, cannot be a loyal citizen to the United States of America.” Additionally, she has stated that “every practicing Muslim is a radical Muslim,” and that Muslims are a “natural threat to civilized people of the world, particularly Western society.” Despite her anti-Muslim rhetoric, Gabriel reports that she has been welcomed at the Trump White House.

ACT describes the “March Against Sharia” as a pro-human rights event that is intended to protect and honor freedom of religion. Its claims that “many aspects of Sharia law” are completely “incompatible with our laws and our democratic values” echo Newt Gingrich’s statement last summer calling for religious testing of all Muslims in America and suggesting that those who believe in Sharia should be deported.

To support its claim, ACT provides a top 10 list of reasons as to why “Sharia Law is incompatible with American Law.” They include cherry-picked and poorly translated verses from the Qur’an and traditional literature, and they cite only one book. Completely ignoring over a thousand years of legal scholarship and richly diverse interpretations of Sharia, an anti-Muslim grassroots organization focused on ‘national security’ has attempted to re-define what this aspect of Islamic law is. For ACT, and many other anti-Muslim organizations, think- tanks, ideologues, and politicians, Sharia has been defined unilaterally as incompatible with Western law.

Sharia, Arabic for “a path to life-giving water,” can be best explained as an Islamic ethical code, a moral compass on all aspects of life — from how to pray to how to greet one’s neighbors. It is more than a set of laws; legal scholar Dr. Asifa Quraishi describes it as a “body of Qur’an-based guidance that points Muslims toward living an Islamic life.”  Sharia consists of the unchanging principles and values originating from divine revelation. It is composed of five main branches, one of which is punishments. Despite this common conflation of Sharia with punitive measures, the writings for this portion account for just three percent of all Sharia content. The human understanding of Sharia is called fiqh, legal opinions by scholars based on rigorous intellectual study of the Qur’an and Sunnah (examples from the Prophet Muhammad’s life). Fiqh is a body of legal opinion and is subject to change in response to new challenges and circumstances. Most importantly, there is no one book that outlines universally agreed upon Sharia. But in any case, in accordance with the Qur’an (2:256), Sharia cannot be imposed on any unwilling person.

Sharia is a central part of the observance of Islam by a majority of Muslims. By organizing a March against a central feature of the religion of 1.6 billion people (around 3.5 million in the US), ACT violates exactly what it claims to be defending: religious freedom. Under the guise of promoting “human rights,” ACT continues to disseminate toxic anti-Muslim views during a time in which hate crimes against Muslims in the United States are becoming an almost weekly occurrence. On May 27 in Portland, Oregon, a white supremacist stabbed three individuals (killing two) who attempted to stop him from verbally assaulting two women (one of whom was Muslim and wore the hijab). On June 4, a Somali American woman was brutally beaten in Ohio after coming to the defense of a fellow Somali American woman.

These scheduled demonstrations are just the latest in ACT’s long list of anti-Muslim campaigns. The organization, headquartered in Virginia Beach, VA, has previously drummed up support to push for legislation to ban Sharia from US courts. This step to outlaw Sharia was not in response to any measure by a Muslim or Muslim organization attempting to impose it. Yet, forty-nine bills have been introduced in 26 states proposing banning or severely restricting the practice of Sharia. Since 9/11, Republican legislators have submitted proposals in over 32 states to legally ban Sharia law. As of 2016, nine states have passed so-called “foreign law bans” that single out Sharia. The origin of this anti-Sharia legislation goes back to 2007, when anti-Muslim activist and lawyer David Yerushalmiunveiled the “Mapping Shari’a in America Project,” targeting 2,300 Islamic institutions in the U.S. Yerushalmi also issued a policy paper that stated that “adherence to Islam as a Muslim is prima facie evidence of an act in support of the overthrow of the US government,” and that practicing Islam should be a “felony” that is to be “punishable by 20 years in prison.” It was Yerushalmi who offered templates of anti-Sharia bills to legislators in over 20 states.

It is frankly comical to assume that any foreign law would supersede the Constitution, since US law alreadyprohibits the use of foreign laws to interpret the Constitution. Moreover, this argument, pushed by anti-Muslim ideologues, politicians, think tanks, and organizations, supports an additional complementary narrative: the stealth jihad anecdote, which maintains that Muslims are a “fifth column” who seek to replace Western constitutions and law with Sharia. Saturday’s protest is part of a larger misinformation campaign that seeks to demonize and vilify the American Muslim community. The movement uses inflammatory rhetoric to create an ‘us vs. them’ dichotomy, identifying Muslims as a group of individuals who are plotting to destroy the ‘Western,’ ‘civilized’ world.

The ‘March Against Sharia’

SPLC has documented a list of racist and anti-Muslim comments published on the official Facebook page for the March, and run by Scott Ryan Pressler, the organizer of this weekend’s protests. Comments include calls for violence, pictures of former President Obama with a noose around his neck, calls for murder, and references to Muslims as “cancer” and “maggots.” Additionally some of the protests have called upon anti-Muslim and anti-government militant groups, such as the three percenters (III%ers) and Oath Keepers, to provide security.

The March Against Sharia is a fear-mongering tactic employed by anti-Muslim campaigners. ACT’s march only seeks to legitimize and embolden those who hold discriminatory and hateful views towards Muslims, at a time when the latest FBI numbers show that anti-Muslim hate crimes are at their highest since 9/11.

ACT for America is the largest anti-Muslim organization in the United States, which has led campaigns to ban sharia. The group has boasted a “direct line” to the White House through its connections with Republican lawmakers and other politicians. read the complete article

Is ACT for America really a grassroots organization?

Brigitte Gabriel is the founder and head of ACT for America, a prominent anti-Muslim group. Having met with staff in the Trump administration, she has said her group has a “direct line” to the White House. read the complete article