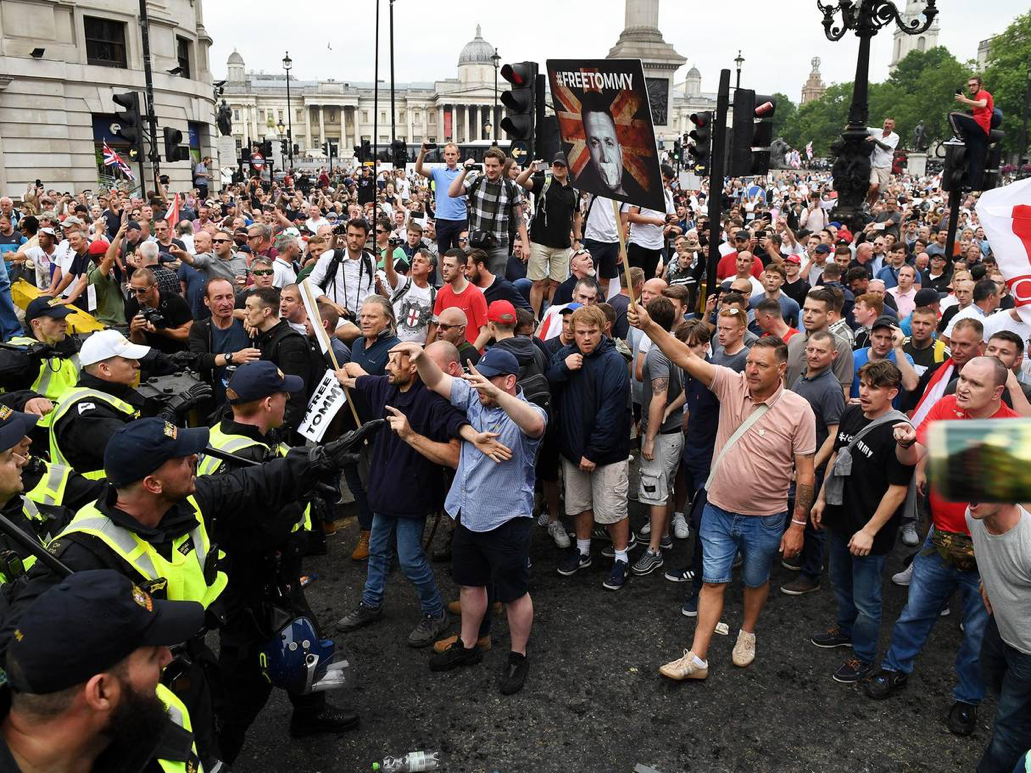 Within a span of two months, central London experienced two violent rallies in support of imprisoned British anti-Muslim and anti-immigration activist, Tommy Robinson.  The second demonstration held on Saturday, July 15th 2018, involved hundreds of demonstrators and merged with Pro-Trump supporters, as the weekend marked the U.S. President’s visit to the United Kingdom.

On May 25, 2018, British authorities arrested Robinson after he broadcasted “an hour-long video over Facebook from outside Leeds crown court,” in which, “he made comments that risked causing a trial to collapse.” On May 29, 2018, a judge sentenced Robinson to 13 months for contempt of court. In response, Robinson’s supporters organized demonstrations across the globe in support of the co-founder of the English Defense League (EDL), a racist right-wing organization.

The first rally in support of the Luton-born activist was held on June 9, 2018. An estimated 15,000 protestors attended the demonstration, which began in Whitehall and culminated at Trafalgar Square in London. The rally turned violent as protestors including far-right activists, Neo-Nazis, and others “hurled bottles, metal barriers and other objects at police lines,” injuring five police officers.

One of the speakers at the June rally was Dutch politician, Geert Wilders, who referred to Robinson as a “freedom fighter,” because he “says what no-one dares to say.” Wilders continued by accusing the government of selling “us out with mass migration, with Islamisation, with open borders,” and declaring “we are almost foreigners in our own land.” Wilders also spoke at the second rally held on July 14th via video.  Other high profile speakers at the second demonstration included Australian anti-Muslim activist, Debbie Robinson, who stated Islam “is at war with us,” Filip de Winter of Belgium, who has claimed Islam to be “Europe’s hereditary enemy,” and the Swedish far-right politician Kent Ekeroth. U.K. anti-racist organization, Hope Not Hate, described the event as a “rallying point for the global far-right.”

Statements made by speakers at the rally exemplify the anti-Muslim talking points of the far-right: 1) Islam is incompatible with the West; 2) Muslims are invading the West; and 2) criticism of those claiming a Muslim takeover, is an attack on freedom of speech.

Such arguments are not restricted to the far-right as alarmist anti-Muslim narratives have been adopted in the mainstream. While supporters of Robinson include Neo-Nazis, they also include elected members of governments and mainstream politicians, illustrating the normalization of Islamophobia today.

Despite identifying himself as a nationalist and an advocate of closed borders, Wilders declared “our land” in a country neither of his birth nor residence. This rhetoric is echoed by the far-right who view themselves as a collective despite living in different countries across the globe; what unites them is a desire to create a space for those identified as “white.” It helps explain why rallies in support of Robinson were held from Toronto, Canada to the Australian cities of Melbourne and Sydney.

The use of “our land” is tied to the abstract concept of “the West,” a place defined by values such as democracy, free speech, tolerance, and individual liberty.  With the creation of an “us,” there arises a “them,” or the “other,” and in today’s society this group has largely come to be identified as Muslims. Supported by centuries of orientalist thought, Muslims are described as authoritarian, intolerant, violent, and backwards. In this worldview, the two constructs are unable to coexist. Conversations around this dichotomy invoke “cultural differences” between the two groups, with those identifying as part of the “West” describing Muslims as unable to integrate or unwilling to assimilate. Today, this viewpoint of “clashing civilizations,” has led to discriminatory policies such as bans on immigration from Muslim-majority countries.

The nationalism promoted by Robinson, Wilders, and the like is coated with vague phrases of “English identity,” “America First,” or “European values,” and uses dog-whistle issues of immigration and national security to support the white nationalism advocated by neo-Nazis. This is demonstrated by Robinson’s supporters performing Nazi salutes and carrying banners reading ‘f*** Islam.’ The undercurrent of alarmist claims of a changing culture and clashing values remains a racist line of thought, in which those identified as non-European or non-Western, and ultimately non-white, must be excluded.

This is why we see international connections amongst right-wing activists who advocate closed borders and an end to immigration but have no qualms with crossing borders to deliver their ethno-populist ideas. Robinson advocated the protection of English identity against the invasion of Muslims because in his brand of nationalism, “English” and “Muslim” are mutually exclusive identities. He had no issues speaking at and even helping form anti-Muslim groups outside of the United Kingdom, because such engagement supported the larger aim to promote white nationalism.

This global interaction of the far-right has blossomed with the advent of social media. Before the platform banned him, Robinson had almost half a million followers on twitter. After his arrest and imprisonment, far-right activists like Lauren Southern used their online platforms to call attention to Robinson’s case. U.S. based anti-Muslim writers Pamela Geller and Robert Spencer used their websites and social media platforms to feed the online far-right and anti-Muslim echo-chamber.

Spencer defended Robinson, stating he was being “harassed and persecuted by the British government for calling attention to the activity of Muslim rape gangs, which British authorities have done everything they could to cover up, and to jihad violence and Sharia oppression in general.” He further categorized the British government’s imprisonment of Robinson as “persecution,” arguing that it “represents a persecution of everyone who respects free societies, of which free speech is the cornerstone.” Geller identified Robinson as a “pro-freedom activist,” and stated that if Robinsons is not released, “his imprisonment is the death knell of free Britain.”

Support from Americans for Tommy Robinson goes beyond tweets and blog posts. A press release by the Middle East Forum, described by the Center for American Progress as a “far-right think tank…known for its anti-Islam views and hawkish foreign policy recommendations,” revealed that it was behind the two violent rallies held in London. MEF also stated it was covering Robinson’s legal fees and claimed it would be “bringing foreign pressure on the UK government to ensure Mr. Robinson’s safety and eventual release.”

Additionally, members of Congress and the Trump administration have voiced their support for Robinson. In June 2018, Arizona Republican Congressman Paul Gosar told right-wing media platform Breitbart that he hoped “the United States intervenes and speaks up over the persecution of Tommy Robinson.” Representative Gosar not only voiced his support but attended the July 14th rally in London, during which he described Muslim men as a “scourge” on society.

A Reuters report revealed that Sam Brownback, the Trump administration’s Ambassador for International Religious Freedom, raised Robinson’s case with the British ambassador to the U.S.  At the meeting, Brownback allegedly stated “that if Britain did not treat Robinson more sympathetically, the Trump administration might be compelled to criticize Britain’s handling of the case.” It’s unclear whether Brownback’s decision to call attention to Robinson was a result of MEF’s lobbying efforts. The two have previously interacted as MEF’s founder, Daniel Pipes, interviewed Brownback back in 1998.

Robinson’s anti-Muslim and anti-immigration rhetoric has attracted a global audience and the response to his arrest and imprisonment has transcended borders. Much of this is tied to the mainstreaming of anti-Muslim rhetoric and policies in Europe and America. His case demonstrates how anti-Muslim talking points have been adopted by the widespread networks of the far-right.

Mobashra Tazamal is a Senior Research Fellow at the Bridge Initiative.