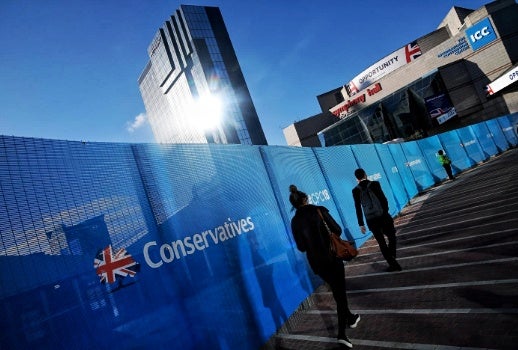 Anti-Muslim sentiment is rife in the UK’s Conservative Party, from disparaging comments on social media platforms to political campaigns. Despite the overwhelming evidence, the party’s leadership has failed to take the necessary steps in addressing its institutional Islamophobia. Senior officials have even gone so far as to claim Islamophobia doesn’t exist, signaling the acceptance of anti-Muslim rhetoric amongst its ranks. This is exceptionally dangerous given that the party leads the United Kingdom in a time of soaring anti-Muslim hate crimes.

The number of public incidents involving Islamophobia in the Tory Party is emblematic of the pervasiveness of the issue. The 2016 London mayoral campaign between Conservative MP Zac Goldsmith and Labour MP Sadiq Khan, a British Muslim, involved Goldsmith’s team using anti-Muslim tropes as smear tactics against his opponent. Goldsmith’s messaging portrayed Khan’s religion as a warning sign, alleging he was connected to “extremists,” and thus could not be trusted to lead the city. Some members of the party called out the campaign as “repulsive” and “racist,” whereas other senior members waited until after the election, which saw Khan become the first Muslim mayor of London, to voice their opinions. However, Islamophobic comments continue as Shaun Bailey, the current Conservative London mayoral candidate, just last year shared a tweet referring to Khan as “mad mullah Khan of Londonistan.”

Recently, a trail of anti-Muslim comments made by Conservative Party members have been uncovered on social media. In March 2019, 14 members were suspended after Twitter account, @matejacob discovered, collected, and published a slew of racist and anti-Muslim remarks by party members online. One individual wrote they would like to “turf all Muslims out of public office,” while another expressed desire to “get rid of all mosques.” Another claimed that voting for Sajid Javid, the Home Secretary, in future leadership races would mean a vote for “Islam to lead this country.” On April 14, 2019, the @Matesjacob account stated that they had compiled their “100th report of racism from a Conservative Party member,” but still have a “massive list yet to investigate.”

The Guardian found additional evidence of Islamophobic comments by members online, some referring to Muslims as “cavemen” and claiming “most” Muslims are sex offenders. On March 24, 2019, the newspaper revealed that 15 members, who had been suspended for their anti-Muslim comments, had been “quietly reinstated,” demonstrating yet again that the party does not take Islamophobia seriously. Further, the Guardian found that “in the majority of cases where a councilor was reprimanded for retweeting or sharing offensive content, they were later readmitted to the party.” The Guardian has stated the “current government has not only failed to do enough to challenge Islamophobia across the country, it has not even made a serious effort to root out bigots from its own ranks.”

Muslim Conservative members have detailed their own lived experiences of Islamophobia and racism from within the party. In 2018, Ajay Jagota, former chairman of the South Shields Conservative Association, attended an event at a neighboring association where he overheard a member refer to him as a “Muslim in a pejorative way.” Jagota raised a complaint and pursued the matter at various levels, even speaking directly with the party chairman, Brandon Lewis, and writing to Prime Minister Theresa May. He emailed and followed up but no action was taken. Rather it seemed as if “there was a deliberate attempt to sweep the complaint under the carpet in the hope that it would go away.” As a result of his experience, Jagota resigned as chairman in January 2019.

Most recently, the Tory government took rare action against its housing advisor Roger Scruton, following his interview with The New Statesman. Scruton, echoing the dehumanizing language used by the Christchurch mosque gunman, stated that “Hungarians were extremely alarmed by the sudden invasion of huge tribes of Muslims from the Middle East.” Additionally, he claimed Islamophobia was a propaganda word “invented by the Muslim Brotherhood in order to stop discussion of a major issue.” What is most surprising is that this isn’t the first time Scruton has made these remarks publicly.

Another individual who has a history of offensive and racist comments that the party has failed to discipline is former Mayor of London and Secretary of State for Foreign and Commonwealth Affairs, Boris Johnson. In December 2018, the party panel found that Johnson’s disparaging anti-Muslim comments likening women wearing burqas to letterboxes and bank robbers had been “respectful.” The party’s failure to take any action against Johnson sends a message to the wider public that such rhetoric is acceptable. It’s important to note that Tell MAMA, which records anti-Muslim hate crimes, found a “direct link” between Johnson’s comments and an uptick in incidents targeting women who wear the niqab.

Former co-chair of the Conservative Party, Baroness Sayeeda Warsi has called on Britain to wake up to this “growing form of bigotry and hatred — Islamophobia,” stating it had passed “the dinner table test,” and was found in the “most respectable of settings.” After three years of privately raising concerns about Islamophobic comments within the party with no discernible response, Lady Warsi spoke out publicly last year. She has led the calls for the Conservatives to hold an inquiry into the party’s handling of Islamophobia, and urged the party to adopt the definition of Islamophobia produced by the All-Party Parliamentary Group on British Muslims. The party has failed to do either.

A recent 2019 report by the anti-racist organization, Hope Note Hate, concluded that the Conservatives are “‘signaling Islamophobia is acceptable’ in the party by ignoring anti-Muslim sentiment among their ranks.” The culture of denial runs to the top and the party’s senior leadership has shown a lack of urgency in addressing the pervasiveness of the issue. The party hasn’t simply turned a blind eye; it has accepted Islamophobia as a norm, signaling to wider society that anti-Muslim bigotry is defensible, and thus threatening the rights and lives of millions of Muslims in the United Kingdom.