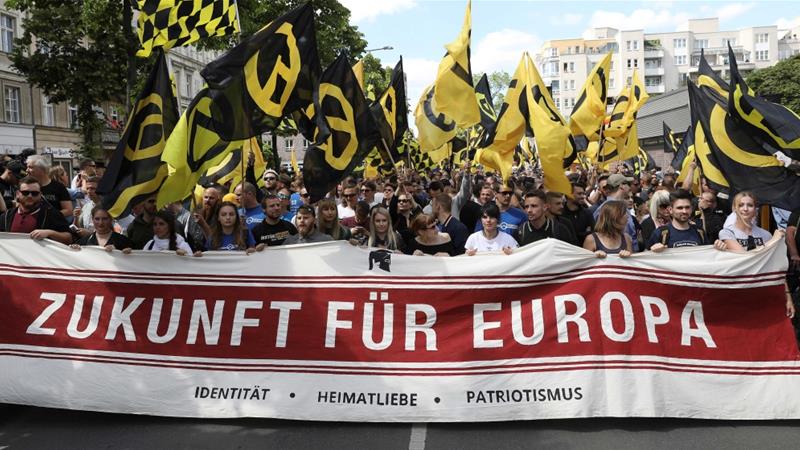 The Identitarian movement has attracted a lot of attention since the white-supremacist terrorist at the Christchurch mosques made headlines, naming his manifesto – “The Great Replacement” – after a famous slogan of this movement.

The Identitarian movement has become the intellectual and activist forefront of the New Right in the postmodern era. It goes back to France’s “Nouvelle Droite” (New Right), which was originally an attempt to present right-wing extremist views in a palatable intellectual manner and help mainstream their ideas by creating a cultural hegemony. In organizational terms, the Identitarian movement emerged from the 2002-established French Bloc Identitaire’s youth wing. When the Austrian Branch of the Identitarian movement was established in 2012, Strache called it an “activist civil society organization that uses traditional leftist methods and personal links are manifold.”

Strache regularly disseminated information provided by the Identitarian movement on Facebook. The bookshelf of Minister of Infrastructure Norbert Hofer, who had lost only slightly in the presidential elections in 2017 against the current President Alexander Van der Bellen, features right-wing extremist author Renaud Camus’ famous book “The Great Replacement.”

Martin Sellner spoke at the FPÖ’s party academy alongside other right-wing extremists. The Identitarian movement shares its rooms in buildings rented by FPÖ-politicians and many FPÖ-members have co-organized events with the Identitarian movement. Given these diverse intellectual and personal links, one understands the anger that Martin Sellner has since the FPÖ’s distancing themselves from the young activists, who used to prepare the ground for the political program of the FPÖ.

And Martin Sellner, the voice of the Identitarian movement, is by no means trying to hide his ideology after the Christchurch terrorist attack. Rather, he clearly draws the line between his movement and the terrorist by arguing that they would never endorse violent acts.

Following the Christchurch terrorist attack, Sellner tweeted: “The perpetrator of Christchurch wants to blow up the time bomb we are sitting on. The mainstream just denies it. The Identitarians want to defuse it.” The time bomb – the replacement of white (in his view native) people by a Jewish-Muslim-Liberal-Marxist-Feminist conspiracy – still forms the core belief in their struggle.

In his discourse, Sellner connects a selective and ideological reading of history such as the siege of Vienna by the Ottomans with the idea of imagined systematic rape of white women by hypersexualized brown Muslim men. And it is this ideology that creates the hotbed for individuals to take the arms. An ideology that is widely shared among many right-wing extremist parties, from the Rassemblement National to the Vlaams Belang to the Sweden Democrats as well as those right-wing extremist parties that are in power such as the Lega Nord and the Austrian Freedom Party. To give an example: The so-called Migrant Pact, which was negotiated under the U.N. was not signed by, among others those countries that are governed by the far-right, like Austria and Italy. And this happened with the help of an orchestrated anti-immigration discourse that was launched by right-wing movements like the Identitarian movement.

And this is what should make us even more cautious: The ideas of the Identitarian movement, from the fringes in the 1980s, have not only been mainstreamed but are currently even being put in practice by European governments, let alone its extension by terrorists like the one in New Zealand.