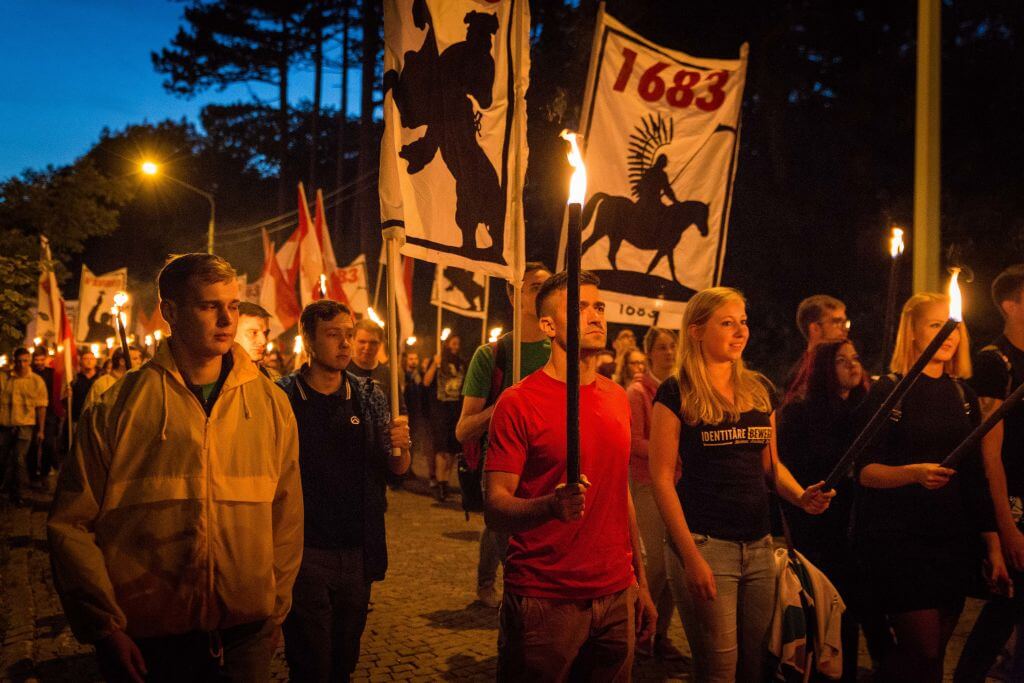 A NYT article put the spotlight on Europe’s far right or more specifically on Martin Sellner, whom they called a “poster boy of Europe’s new far right.” Mr. Sellner, a leading figure of the Identitarian Movement in Austria, received a 1,500 euro donation — about $1,700 — a year ago from the New Zealand terrorist Brenton Harrison Tarrant, whose murdering of 50 Muslim worshipers in the Christchurch mosque made international headlines. In his manifesto, Tarrant had already written that he supports many groups, while not being a member of anyone. The Identitarian Movement, from whom he took the slogan of his manifesto’s title – The Great Replacement – seems to be one that he had supported financially. Mr. Sellner is not a nobody, but one of its most outspoken and public figures.

He had already became famous on an international level with the “Defend Europe“-project that was launched in the summer of 2017 to “prevent” or “stop” the “population exchange,” which the Identitarian Movement propagates. The mission “Defend Europe” was launched to crowdfund for financing a ship to stop “illegal immigrants on the coast of Europe” and to “defend the borders of Europe.” A crew who chartered a ship for their effort to send refugees “back to Africa” by harassing and blocking search and rescue vessels run by NGOs, who often rescue refugees in the Mediterranean. The mission failed because they were refused permission to refuel and to access a harbor in Italy.


The Identitarian movement, from whom the Christchurch terrorist took the slogan of his manifesto’s title – The Great Replacement – seems to be one that he had supported financially.

Beyond his transnational activities, Martin Sellner is also a leading figure of the Identitarian Movement in Austria. The Identitarian Movement is characterized by the Austrian intelligence agency BVT as racist and nationalist movement. It rallies to “protect the respective country or ‘whole Europe’ from ‘Islamization’ and mass immigration.” Also, the intelligence agency states in a report from 2014 that “the distancing of neo-Nazism in public statements is to be regarded as a tactical manoeuvre, since there are in the ranks of the movement’s elites officially known neo-Nazis and contacts with other right-wing extremists.” What is characteristic is that it uses a pseudo-intellectual discourse to disguise its own racist and nationalist world view. Throughout Europe, the Identitarian Movement follows sensational campaigns that make it to the headlines like blocking roads, occupying mosques, clashing with leftists or attempts such as blocking an NGO ship in Sicily.

The Identitarian Movement is no unique Austrian organization. Rather, it has its roots in the New Right that was born in France as far back as in the 1970s. It emerged as a counter strategy to the ‘New Left’ following the 1968-movement. The Nouvelle Droite (New Right) was originally an attempt to present right-wing extremist views in a more intellectual manner, and it invokes anti-democratic thinkers who were active under the name ‘Conservative Revolution’ at the time of the German Weimar Republic. The strategy of the New Right was a cultural project.

Drawing on leftist thinker Antonio Gramsci, the idea was to work towards cultural hegemony to win the minds of the masses. The radical change of the political system should not come with the help of a political coup, but with the shift of interpretations and arguments and the mainstreaming of right-wing positions. Hence, outdated terminologies were substituted, such as “race” with “culture”. New terminologies that have become widespread if not mainstream in many European countries such as “remigration”, “endangering one’s culture” and “Islamization” were if not introduced into the public opinion-forming process, massively distributed in relevant Internet forums.

The current Identitarian movement, which presents itself as a ‘hipster’ project can be traced back to France in 2002, when the far-right Bloc Identitaire party set up a youth wing. Since then, these far-right youth movements have emerged even without any parent organization. Today, the Austrian chapter is one of the most active across Europe.


Martin Sellner is a leading figure of the Identitarian Movement in Austria. The movement is characterized by the Austrian intelligence agency BVT as racist and nationalist movement. It rallies to protect whole Europe from ‘Islamization’ and mass immigration.

Sellner is also we connected to important leader of the far-right in other European countries such as German leaders of the extreme right Björn Höcke, Götz Kubitschek and Jürgen Elsässer to mention but a few. In 2006, Mr. Sellner had put swastika on the walls of a synagogue. And this is not the case for Mr. Sellner only. Other leaders of the Identitarian Movement were close to Gottfried Küssel, a famous Neo-Nazi who was convicted to 8 years in prison because of re-engagement in National Socialist activities. Küssel was also near to one of the most famous Austria Neo-Nazi websites that was shut down by the government due to re-engagement in National Socialist activities. Only recently, the movement sighed with relief following a trial against 17 of its members who were absolved from participation in a criminal organization. The director of the Austrian intelligence service had already feared that this would be taken as their proof of not being right-wing extremist.

And indeed, this seems to have been a key argument for the now governing far-right Freedom Party (FPO) to loosen its handling of the movement, since there is a strong sympathy between both. While vice-chancellor Mr. Strache in 2016 had called the Identitarian Movement “a non-partisan non-leftist civil society”, following the news that Mr. Sellner received money from the New Zealand white supremacist terrorist, he claimed that there was a rule that no member of the Identitarian could at the same time be a member of his party. This is easy to say, since the ‘movement’ has only few formal members. Also, this rule came only years after the Identitarian Movement had been surveilled by the intelligence service.

Also, others in his party such as the chairman of the Styrian FPO, who had previously participated in rallies of the Identitarian Movement, reconfirmed that there was no problem with the Identitarian movement. Also, the current minister of interior affairs had just participated in a congress “Defender of Europe”, which was co-organized by the movement. While the general secretary of the FPO argues that there are no financial and organizational relations between the FPÖ and the Identitarian movement, the movement shares rental space in houses also rented to the FPO and other right-wing fraternities. Other FPO representatives were also speaking during events organized by the Identitarian movement. And also, the political academy of the FPO had invited Mr. Sellner as a speaker. In the past, current vice-chancellor Strache, who is the chairman of the FPO, had regularly shared postings of the movement on Facebook, thus demonstrating the acceptance of their ideas.


The white supremacist terrorist Brenton Tarrant was not only fascinated by the theories of the great replacement by the Identitarian Movement, but also happy to support their cause.

In Austria, the intelligence agency has not only been monitoring this movement. Also, people linked to the Identitarian movement were banned from participating in military activities in the ministry of defense. When the far-right Freedom Party in Austria (FPO) formed a coalition with the People’s Party (OVP), in January 2019, however, those restrictions were lifted. This restriction note had in the past explicitly affected 56 individuals. Links between the now governing FPO and the Identitarian movement are many and have been widely documented.

Further connections to Austria are still being investigated, since the Christchurch terrorist seemed not only to have travelled within Austria, but also with three Austrians to North Korea and seems to also have had contact with a right-wing underground organization of former soldiers in Germany. But what seems obvious is that the terrorist Tarrant had a special relationship to the Identitarian movement, since also the French Génération Identitaire received around 2,200 euro between 18 and 25 September 2017. But it seems clear at this point that white supremacist terrorist Brenton Tarrant was not only fascinated by the theories of the great replacement by the Identitarian Movement, but also happy to support their cause.