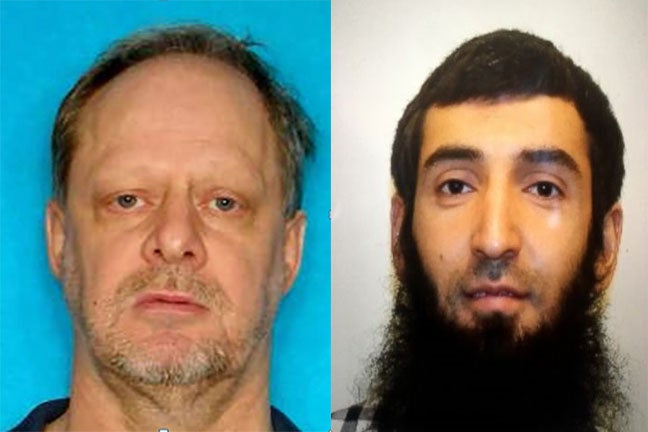 One of the worst mass shootings in modern American history recently took place in October 2017 when a white man named Stephen Paddock shot over 500 people (killing 58 of them) during an outdoor concert in Las Vegas. A few weeks after the Las Vegas massacre, a 29-year-old Muslim immigrant from Uzbekistan named Saifullo Saipov killed 8 people in lower Manhattan in New York City while allegedly saying “Allahu Akbar” during his murder spree.

Both of these acts of mass murder were meant to instill terror in the general public; yet only one of them is called terrorism.

When a bearded man with a foreign-sounding name allegedly says ‘Allahu Akbar‘ before killing 8 people, we have no problem labeling it an act of terrorism. But when a white man shoots over 500 people (killing over 50 [or 625%] more people than the Muslim perpetrator), we do not see the word ‘terrorism’ mentioned anywhere.

That is the textbook definition of a “double standard”.

Did you know that terror attacks committed by Muslims receive nearly 500% more media coverage than those terrorist attacks carried out by white men in the United States?

According to a July 2017 media study conducted by Georgia State University, researchers found that hysteria around groups likes ISIS grows when the global media disproportionately magnifies their criminal acts compared to terrorist acts committed by white men. For instance, the researchers analyzed all terrorist attacks in the United States from the years 2011 to 2015 and found that there was a 449% increase in media coverage when the perpetrator was Muslim (compared to when the perpetrator was not a Muslim).

Furthermore, this important study found that Muslims committed only 12.4% of attacks during the 5-year period studied; but received over 41.4% of total news coverage during that same time period (an over-representation of 340%).

For instance, they found that the 2013 Boston Marathon bombing- which killed 3 people total- received almost 20% of all media coverage relating to American terror attacks in that five-year period alone. In contrast, media coverage of a 2012 white supremacist terrorist massacre at a Sikh temple in Wisconsin where 6 people were murdered (twice as many fatalities as the Boston Marathon bombing)- carried out by a 40-year-old white supremacist named Wade Michael Page – constituted only 3.8% of media coverage.

Let us also never forget a white supremacist terrorist named Dylann Roof— the proud 21-year-old white supremacist- who on the evening of June 17, 2015, walked into the Emanuel African Methodist Episcopal Church in Charleston, South Carolina, with a .45-caliber Glock handgun ready to commit an act of mass murder. After sitting with the black church’s congregants for over an hour during their Bible study class, Dylann Roof then proceeded to murder 9 African-American worshippers in cold blood- including South Carolina state senator Clementa Pinckney- whom he specifically had asked for by name before committing this savage act of domestic terrorism.

By his own admission, Dylann Roof’s act was racially motivated since he had stated that he wanted to start a “race war” before his terrorist rampage. Before opening fire, Dylann Roof had told his innocent black victims that “I have to do it…You rape our women and you’re taking over our country.” In a photograph that he previously posted on social media, the white supremacist wore the flag of formerly white-ruled apartheid South Africa. His friends described him as a person who regularly made racist remarks and his roommate even admitted that Dylann Roof was planning something like this massacre of black churchgoers for nearly six months before he walked into the Charleston prayer meeting that fateful evening.

After his act of bloody mayhem, Dylann Roof was treated with remarkable care by the arresting police officers, who provided him with a bulletproof vest and even bizarrely took him to a Burger King fast food restaurant before booking him after he complained that he was hungry.

Can you imagine how South Carolina police would have treated a black Muslim gunman who had murdered 9 white people in a church?

Although Dylann Roof murdered 300% more people than the Boston Marathon bombers, this white supremacist’s act of anti-black terror received only 7.4 per cent of media coverage, according to the aforementioned Georgia State University study.

According to the Southern Poverty Law Center (SPLC), another white supremacist named Frazier Glenn Miller- who created the Carolina Knights of the Ku Klux Klan (KKK)- is a crude, sieg-heiling anti-Semite who was sentenced to death for the 2014 murder of 3 people (the same number of fatalities as the Boston Marathon bombing) at a suburban Kansas City synagogue; but his act of domestic terrorism only accounted for just 3.3% of media coverage at the time.

In November 2015, an anti-abortion Christian crusader named Robert Dear walked into a Planned Parenthood clinic in Colorado and murdered 3 people (the same number of victims as the Boston Marathon bombing) in an act of Christianist terrorism. Robert Dear was known for strongly espousing extreme Christianist beliefs throughout his life. For instance, his ex-wife once publicly testified in open court that Robert Dear “claims to be a Christian and is extremely evangelistic. He says that as long as he believes he will be ‘saved’ [by Jesus], he can do whatever he pleases.” In his own deranged mind, Robert Dear’s murderous actions at Planned Parenthood were undoubtedly justified by his warped version of his own dystopian Christianist ideology. Yet, following Robert Dear’s bloody terrorist rampage, it was strange that network television news producers did not feel compelled to book Christian leaders to appear on their TV shows to condemn the Planned Parenthood attack as an act of Christian terrorism.

It should also be noted that Robert Dear’s act of terrorism was directed against Planned Parenthood, an organization that has been demonized by many Republicans peddling the falsehood that the group sells “baby parts” as part of its business practices. Robert Dear even made reference to this false and inflammatory political charge as he went about his homicidal mission that day. But again, Robert Dear’s murder spree was not covered by the media as an act of terrorism, even though it clearly had a politicized target.

“When President Trump asserted that the media does not cover some terrorist attacks enough, it turns out that he was correct,” stated the July 2017 Georgia State University report on the media’s double standard of terrorism coverage. “However, his assertion that attacks by Muslim perpetrators received less coverage is unsubstantiated” by the facts. “Regardless of other factors, attacks perpetrated by Muslims receive a disproportionate amount of media coverage. In the present data, Muslims perpetrated 12.4% of the attacks yet received 41.4% of the news coverage,” the Georgia State researchers concluded.

In June 2014, a married white supremacist couple named Jerad and Amanda Miller committed an act of domestic terrorism when they murdered 3 people (including 2 police officers) before killing themselves. According to The Washington Post, both Jared & Amanda Miller were “enamored by a right-wing, conspiratorial view of federal authority,” according to law enforcement officials. During their terrorist rampage, they murdered 2 police officers- Alyn Beck and Igor Soldo- as the two police officers quietly ate their lunch and even covered one of their bodies with a Nazi swastika and the well-known yellow “Don’t Tread on Me” flag, a symbol of the right-wing Tea Party movement. The married couple then shouted about “Revolution!” as they moved to a nearby Wal-Mart store, where Amanda Miller murdered a customer named Joseph Wilcox before their terrorist spree ended with their double suicide.

As Washington Post media reporter Paul Farhi wrote that “few media accounts have described the Millers as terrorists or their actions as terrorism,” noting that The Washington Post, Los Angeles Times and Associated Press never made any mention of “terrorism” during their coverage of this story.

The most-recent example of this terrorism double standard was Donald Trump’s response to the August 2017 terror attack in Charlottesville, Virginia. A white supremacist from Ohio deliberately drove his car into a group of anti-racism protestors killing 30-year-old Heather Heyer in an act of white supremacist terrorism.

As my friend Dean Obeidallah recently wrote for The Daily Beast, after the Charlottesville attack, Donald Trump defended his silence after this act of white supremacist terrorism by publicly stating that “I wanted to make sure- unlike most politicians- that what I said was correct.” During a subsequent press conference, Trump decided to bizarrely blame “both sides” for this act of terrorism, adding that there were “very fine people on both sides” of the white supremacist debate.

However, after this latest attack in Manhattan, because the perpetrator in this case happened to be a Muslim immigrant from Uzbekistan, we saw Donald Trump waste no time at all in calling for more “extreme vetting” (aka more “Muslim Bans”), publicly bashing the “Diversity Visa Lottery Program” (which was signed by Republican president George H.W. Bush in 1990) and railing against “political correctness”.

The Arabic phrase “Allahu Akbar” (most commonly translated into English as “God is Great”) is the rhetorical equivalent of the English phrase “Hallelujah” for many Westerners today. Over a billion Muslims around the world recite “Allahu Akbar” every single day during our 5 daily prayers and to show appreciation during other positive life events like the birth of a child, receiving a job promotion or when your fiancé(e) agrees to marry you. As Imam Omar Suleiman from the Yaqeen Institute recently wrote in a CNN column, the phrase “Allahu Akbar” is “used to indicate gratitude when God bestows something upon you that you would have been incapable of attaining were it not for divine benevolence.” As he further pointed out, even Republican Senator John McCain (R-AZ) has stated in the past that the Arabic phrase is no more troubling than a Christian saying “Thank God!” or saying “Hallelujah!”

Thus, if we fail to remedy this terrorism double standard by adequately condemning all acts of terrorism equally- whether committed by ISIS groupies or white supremacists- the only clear message that we will be sending to the rest of the world is that the word “terrorist” applies only to those of us with darker complexions and foreign-sounding last names who happen to say “Allahu Akbar” as we pray towards Mecca five times a day.

Arsalan Iftikhar is an international human rights lawyer, founder of TheMuslimGuy.com and a Senior Research Fellow for the Bridge Initiative at Georgetown University.

Allahu Akbar is an Arabic phrase used in various religious and social contexts to express devotion or as a general exclamation in emotional situations. It has been co-opted by both militants and anti-Muslim activists and is often mistakenly conflated with violence and terrorism. read the complete article

Jihad is an Arabic term meaning “to struggle” or “to strive.” Most Muslims agree that the concept is best understood and practiced as an inner spiritual struggle towards faith and good deeds, but anti-Muslim groups and militants have co-opted the word and equate it to violence, “holy war” and terrorism. read the complete article

There can be little debate that the election of Donald Trump has disparately impacted millions of women, Latinos, people with disabilities, the LGBT community and many more. Additionally, there are millions of American Muslims who... read the complete article

Back to Research Publications