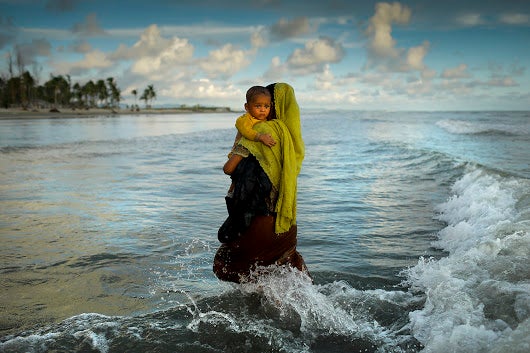 The Economist magazine once said that the Rohingya people in Myanmar are “the most persecuted people in the world” and more than 7 Nobel Peace Prize winners have publicly stated that Rohingya Muslims are facing a “textbook case of genocide in which an entire indigenous community is being systematically wiped out by the Burmese government.”

So why do most countries shy away from labeling it genocide?

“In 1944, as a Jew in Budapest, I, too was a Rohingya,” once said world-renowned philanthropist George Soros during a conference in Oslo, Norway. “The parallels to the Nazi genocide are alarming.” Even though world leaders have been terribly slow in condemning the genocide by Burma’s military, religious and civilian leadership, there is now a growing chorus of global leaders calling it exactly what it needs to be called.

French President Emmanuel Macron was the first world leader to publicly state that attacks on Myanmar’s Rohingya minority amounted to “genocide”. During an interview with a French television network, President Macron told the reporter that France will work with other members of the UN Security Council to address “this genocide which is unfolding, this ethnic cleansing” against the Rohingya Muslim minority during the watch of former Nobel Peace Prize winner Aung Sun Suu Kyi.

Similarly, the international law definition of “genocide” resides within Article 2 of the 1948 Convention on the Prevention and Punishment of the Crime of Genocide which defines the crime of genocide as “any of the following acts committed with intent to destroy, in whole or in part, a national, ethnic, racial or religious group, as such: killing members of the group; causing serious bodily or mental harm to members of the group; deliberately inflicting on the group conditions of life calculated to bring about its physical destruction in whole or in part; imposing measures intended to prevent births within the group; [and] forcibly transferring children of the group to another group.”

Under international law, in order to qualify as genocide, the legal task becomes more difficultsince these actions must be done with provable intent and very few perpetrators of genocide- with the notable exception of the Nazis- have ever left explicit plans detailing their intentions to eradicate minority groups.

In modern times, the first person found guilty of the international crime of “genocide” was a former mayor in Rwanda. In 1998, the International Genocide Tribunal on Rwanda found Jean-Paul Akayesu guilty because “he knew or should have known that the act committed would destroy, in whole or in part, a group” similar to the Burmese government actions against their Rohingya Muslim populations.

Since the International Criminal Court (ICC) has no legal authority to arrest, it must therefore rely on the community of nations to enforce punishment. Making things even more difficult, the United Nations cannot determine genocidal intent without an independent commission of inquiry (after UN Security Council approval) and without cooperation from the Myanmar government, UN investigators would not be allowed into the country to prove genocidal intent.

There is a growing international chorus seeking to condemn the genocide against Myanmar’s Rohingya Muslims. A November 2017 report from the US Holocaust Memorial Museum found that there is “mounting evidence” of genocide against Rohingya Muslims. The UN has described the Myanmar military’s campaign in Rakhine as “textbook ethnic cleansing“, and journalists and human rights groups who have reported from the region have documented widespread rape, killing, and destruction of homes by government troops.

Most recently, the US Treasury Department announced in August 2018 that it had imposed economic sanctions on Burmese security forces for what American officials said was their role in “ethnic cleansing” against Rohingya Muslims and “widespread human rights abuses” against other ethnic minority groups. Similarly, over 20 members of Congress wrote a public letter to the US Secretary of State demanding action on the genocide taking place against the Rohingya people.

“We urge you to confirm publicly that acts of genocide have occurred and to make public such evidence to support this legal determination,” according to the bipartisan letter from 21 Democratic and Republican leaders in Congress. “To do less sends a troubling message, not just to the Rohingya victims and other ethnic minority groups in Burma, but any other nation who may contemplate such crimes now or in the future. We must ensure that perpetrators are brought to justice, that the civilian governments of Bangladesh and Burma are supported, that victims see restitution, and the communities that birthed this ethnic hatred seek reconciliation over time,” the congressional leaders wrote to the Secretary of State.

Furthermore, the de facto leader of Burma (former Nobel Peace Prize winner Aung San Suu Kyi) was stripped of her Freedom of Edinburgh award in August 2018 for her refusal to condemn the violence against the Rohingya in Myanmar. Thus far, she has been stripped of 7 awards because of the genocide on her watch, including awards from the cities of Oxford, Glasgow and Newcastle which also revoked Suu Kyi’s Freedom of the City awards because of her complicity in her country’s genocide of their Muslims.

Since our world has witnessed the horrors of the Holocaust, Bosnian and Rwandan genocides during this last century alone, whenever there are mass murders, systemic rapes and forced expulsions of any minority group on the planet simply because of their race, religion or other demographic features, it becomes the moral imperative for the international community to label it as “genocide” which would trigger protections under international law when no protections are given by that country’s leadership currently led by a former Nobel Peace Prize winner.

Arsalan Iftikhar is an international human rights lawyer who is a spokesperson for the Burma Task Force and is a Senior Research Fellow at The Bridge Initiative.