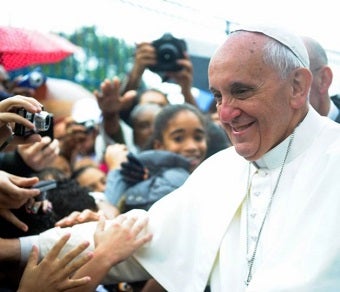 Pope Francis has stated that the ‘world is at war’ following the series of recent terrorist attacks in France and Germany, including the murder of the Catholic priest Jacques Hamel on 26 July. Commenting on the Pope’s current visit to Poland, Kristin Garrity Şekerci writes that he will find a country in which tensions between Christians and Muslims are already heightened, where several anti-Islam protests have been held over the last year.

Pope Francis is currently visiting Poland to celebrate the 1,050th anniversary of Christianity in the country, among other scheduled events. This celebration comes at a critical juncture for Poland, which has begun to head down a dark road of anti-Muslim policies and political rhetoric. Protests and attacks against Muslims are on the rise, politicians are articulating anti-immigrant sentiments, and society appears to be open only to Christian refugees.

Yet Poland has a unique history with Muslims. In the late 14th century, Tatar Muslims first settled in what is now modern-day Poland. During that period, approximately 100,000 Muslims were permitted to observe their faith practices freely. In fact, by the 17th century, the group had erected some 100 mosques and cemeteries. Today, about 5,000 Tatar Muslims, who are proud of their unique heritage and identity, remain in Poland. Additionally, an estimated 30,000 non-Tatar Muslims live in Poland. They include Arabs, Chechens, Eritreans as well as Polish converts to Islam.

Despite Muslims living side-by-side with their Polish neighbours for centuries, polls suggest that they are now perceived as a threat. According to recent findings, 44% of Poles have a negative attitude concerning Muslims, and only 12 per cent of Poles say they personally know a Muslim. Sadly, these negative attitudes have translated into anti-Muslim attacks in recent years, reflecting an alarming increase in Islamophobia. During 2015, for instance, in every month but June, there was at least one incident of physical attack, damage or vandalism to Muslim-owned properties or businesses, or anti-Muslim or xenophobic rhetoric.

Anti-Islam protests have also become a regular feature on Poland’s streets recently. In September last year, thousands of far-right protests took place across the country, following the government’s decision to accept additional refugees. In November, following the terrorist attacks in Paris, crowds gathered outside the city hall in Wrocław, with one of its speakers publicly stating, “Our duty, the duty of lawmakers and the government, is to say that we won’t take a single Islamist into Poland because Poland is for Poles.” As these protests suggest, politics and immigration policy debates often translate into danger for Muslim minorities.This year, Poland has seen a number of violent physical assaults, as well as Islamophobic remarks of a threatening or disparaging nature. In February, for example, Christiano Ramos was physically assaulted on a train outside Warsaw, sustaining injuries to his head and mouth. Originally from Chile, Ramos is a pianist and longtime Polish resident. His attackers, described as skinheads, mistook him for an Arab. And, in March, Visiting Professor Ahmed Abdel-Raheem was physically attacked by two Polish men on a tram in Łódź. Before forcing him off the tram and kicking him in the stomach, they told him, “Leave Poland; go to the UK. They love Muslims and dislike Christians there.”

Prior to the November Paris attacks, government officials had committed to accepting 4,500 refugees in addition to the 2,000 it had previously agreed to. Just before taking office, Konrad Szymański, Minister for European Affairs, commented that “The attacks mean the necessity of an even deeper revision of the European policy towards the migrant crisis. We’ll accept if we have security guarantees.”

In terms of what these security guarantees could look like, one official suggested that Syrian refugees could be trained to form an army that will return to fight in Syria. This would no doubt be problematic as according to United Nations data on the demographics of registered refugees, over half of registered refugees are children under the age of 18. President Andrzej Duda has even asserted that accepting refugees would compromise the health of Polish citizens. According to his logic, refugees risk the spread of “possible epidemics.” Another official stated that “migrants” bring cholera, dysentery and “all sorts of parasites and protozoa.”

But underpinning these statements is perhaps a less tangible fear of Muslims and Islam. Despite initial reluctance, 60 Syrian refugee families were resettled in Poland in the summer of 2015. They are all Christian. Tellingly, the incoming President Duda stated that he anticipated they would be well integrated as “they are culturally close to us.” Other officials have voiced the same sentiments, arguing that refugees should be Christians on the basis that they will be better able to assimilate into Polish society.

In light of Pope Francis’ strong stance on the refugee crisis, there is an open question as to how his statements will be received in Poland this week. He has recently written that “Biblical revelation urges us to welcome the stranger; it tells us that in so doing, we open our doors to God, and that in the faces of others we see the face of Christ himself.” He has also brought 12 Muslim refugees from Syria, including six children, to the Vatican. While Pope Francis’ message is clear, it may be worth repeating during his visit.