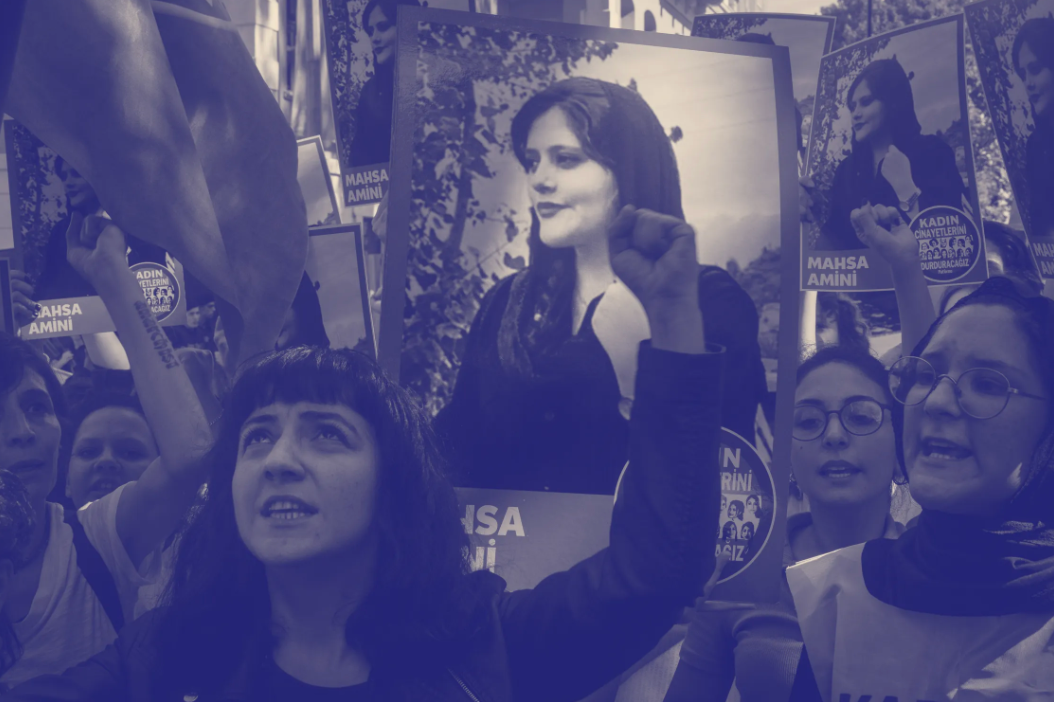 The politicization of women’s bodies has been a fixture in nation-building. Throughout history, women’s bodies have been used as political and ideological battlegrounds, upon which ruling elites debate and issue laws aimed at defining a nation’s identity and values. In this context, a woman’s body is not viewed as an individual human being but is rather seen as a representation of the country as a whole. The body serves as both a political instrument and a central component of a narrative dictating control and national identity.

In recent years, there’s been an upsurge in debates and laws aimed at restrictions over women’s bodies (both inside and out), from abortion bans in the United States, to the mandatory enforcement of the niqab in Afghanistan. In both cases, the state and a sector of society views women not as individuals, but a body that serves as an extension for state policy and identity.

For Muslim women, this experience manifests in multiple ways depending on the country they live in. For example, in countries such as Afghanistan, Saudi Arabia, and Iran, authoritative governments use religious texts to justify control, and command what women must wear, i.e. mandatory hijabs. Similarly, in countries like Canada and France, democratic governments utilize notions of secularism to impose restrictions on what women cannot wear, i.e. hijab bans. In both instances, laws and policies framed either through a religious or secular lens, have the same impact: both ultimately obstruct Muslim women’s right to choose, denying them their individual liberty and freedoms.

Despite their bodies and rights being the topics of debate and impacted by state policies, Muslim women are rarely given the platform to take part in these discussions. The mandatory hijab in Iran and the restrictions on the hijab and niqab in France provide a case study as to how the politicization of Muslim women’s dress has been incorporated into exclusionary nation-making.

In September 2022, Iran’s morality police detained a young Iranian-Kurdish woman, Mahsa Amini, after arresting her for failing to “properly wear the hijab.” She later died in custody, with her family stating she was beaten and tortured by the authorities. Mandatory hijabs have been present in the Islamic Republic since the 1979 revolution, which saw the return of Ayatollah Khomeini. However, issues around veiling were present pre-1979. Under Reza Pahlavi, the Shah of Iran, the government had “forced women to remove their veils through the Mandatory Unveiling Act of 1936.” The Shah viewed the hijab as a barrier to the modernity he envisioned, one “modeled on Western norms.” Thus, hijab became a marker of the type of nation the rulers wanted to build both pre and post-1979.

In the immediate years after the revolution, the leaders of the country imposed mandatory hijab, viewing it as a symbol of Islamic identity and using it as a defining feature in opposition to western secularism. Since then, the country has been led by men, with Ayatollah Ali Khamenei currently serving as the Supreme Leader. Additionally, there is a Guardian Council, which exercises considerable control over the country as the 12 members control the interpretation of “Islamic values” in the country.

Since Amini’s death, Iranian women have taken to the streets shouting “Zan, Zendegi, Azadi” (Women, Life, Freedom), and demanding an end to the inequality and discrimination they have long experienced. Videos online show women walking the streets with their hair uncovered and burning the hijab in defiance of government orders. The removal and burning of the hijab is a visually powerful act against the government’s repression, as the authorities have turned the hijab into a symbol of the state’s authoritative control over women’s bodies and their presence in public. The movement has coalesced around women’s rights, but protesters also carry a variety of grievances against the regime. Members from all sectors of Iranian society (men and women from different socio-economic backgrounds, children and young people, athletes, conservatives and liberals, etc.) have joined the protests to express their frustration with rising inflation, rising cost of living, and lack of democratic participation.

Recently, the spokesman for the promotion of virtue and prevention of vice, a “religious organization responsible for defining regulations relating to the hijab and Islamic attitudes in Iran,” stated that the hijab “is a symbol [of Sharia law].” The view illustrates how Iranian women are tasked with the burden of visibly representing the “symbols” of Iran’s religious and national identity, an identity which has been defined by a group of men. In this climate, women’s disobedience is not only viewed as a violation of the laws but as an attack on the very existence of the country. The response from the Iranian government has largely been violent and repressive, as thousands of protesters have been arrested. There’s also been numerous reports of torture and murder at the hands of law enforcement.

The conversations surrounding Muslim women’s dress in France over the past two decades demonstrate that control of women’s bodies in the public sphere is not isolated to theocratic governments alone. From banning the niqab to politicians calling for restrictions on the hijab in public spaces, France’s measures to forcibly undress Muslim women also violate the freedom to choose. Just as Iranian authorities have defended the mandatory hijab as a symbol of the country’s religious identity, French politicians have described the hijab as antithetical to French values.

Calls to ban the hijab in Europe include both conservative and liberal voices. Often, they incorporate orientalist and Islamophobic rhetoric describing Muslim women who wear the veil as oppressed. They view their campaigns as not only necessary to protect the values of the country, but also needed to “save” Muslim women from the throes of a despotic forces. In these contexts, the wishes and demands of Muslim women are rarely acknowledged and/or given space. Instead, anti-Muslim tropes are amplified: hijab is viewed as a manifestation of oppression, and Muslim men are described as tyrannical forces who subjugate Muslim women.

Following a ban on the burkini (modest swimwear that covers the entire body) in 2016, images of Muslim women being forced to undress on French beaches went viral on social media. Similarly, when the Taliban came back into power in Afghanistan in 2021, they issued a new edict on the mandatory burqa, and images of women in black robes went viral online. In both instances, Muslim women’s bodies were positioned as a public representation of the values outlined by ruling authorities. While the values are rooted in different ideologies, both contexts result in the same outcome for women: a restriction on their human rights.

Both forced hijab and hijab bans seek to regulate how Muslim women present themselves in public spaces. Women who choose to wear hijab in countries such as France are viewed as antithetical to the liberal values and identity of the country. Similarly, not choosing to wear a hijab in states like Iran or Afghanistan is seen as an attack on the “Islamic” identity and values of these countries, where women who do not wear the headscarf are seen as morally corrupt, influenced by the “West,” and in violation of the religious laws as interpreted by the authorities. Those who defy either of these measures in their relative contexts are seen as a threat to the identity of the state.

Another interesting aspect of this issue is that the two voices dictating control over Muslim women have shaped their existence as being morally opposed to one another. The binary of the “West” and “Islam” has been used by politicians, religious leaders, and sectors of society to define and describe who they are in opposition to who they are not. Often the “West” has been framed as an enlightened space that upholds liberal values, where as “Islam” is framed as fundamentalist space where everything is explained through religious text. However, such binaries don’t exist. As Hamid Dabashi argues in his latest book, these “fetishized categories” are an illusion and the “entire binary is false and flawed, a colonially manufactured dualism.”

The demand to regulate how Muslim women appear in public demonstrate the illusion of these binaries, given that countries that would fall into these two binaries (“West” and “Islam”) both do the same thing: restrict a women’s right to choose. Leaders in what would be defined as “Islam” spaces shape their existence as being morally opposed to “Western modernity,” whereas leaders in the “West” define themselves as being “civilized” and “enlightened” in comparison to “Islam.” Muslim women have found themselves as the battlegrounds upon which such simplistic and identitarian narratives of hypothetical structures of “West” and “Islam” take place. While the binaries may be a manufactured illusion, the consequences of these voices are very real for Muslim women.

Muslim women’s bodies have been made a theater upon which contentious politics around identity and nation-building takes place. Any sort of control over the appearance of a Muslim woman is a gateway to greater restrictions, policing and eventual criminalization of free expression. Both hijab bans and forced hijabs have the same impact, they result in socio-economic isolation for Muslim women, and make them prone to different forms of violence from wider society and ruling authorities. The central issue has always been and will always be  freedom to choose.