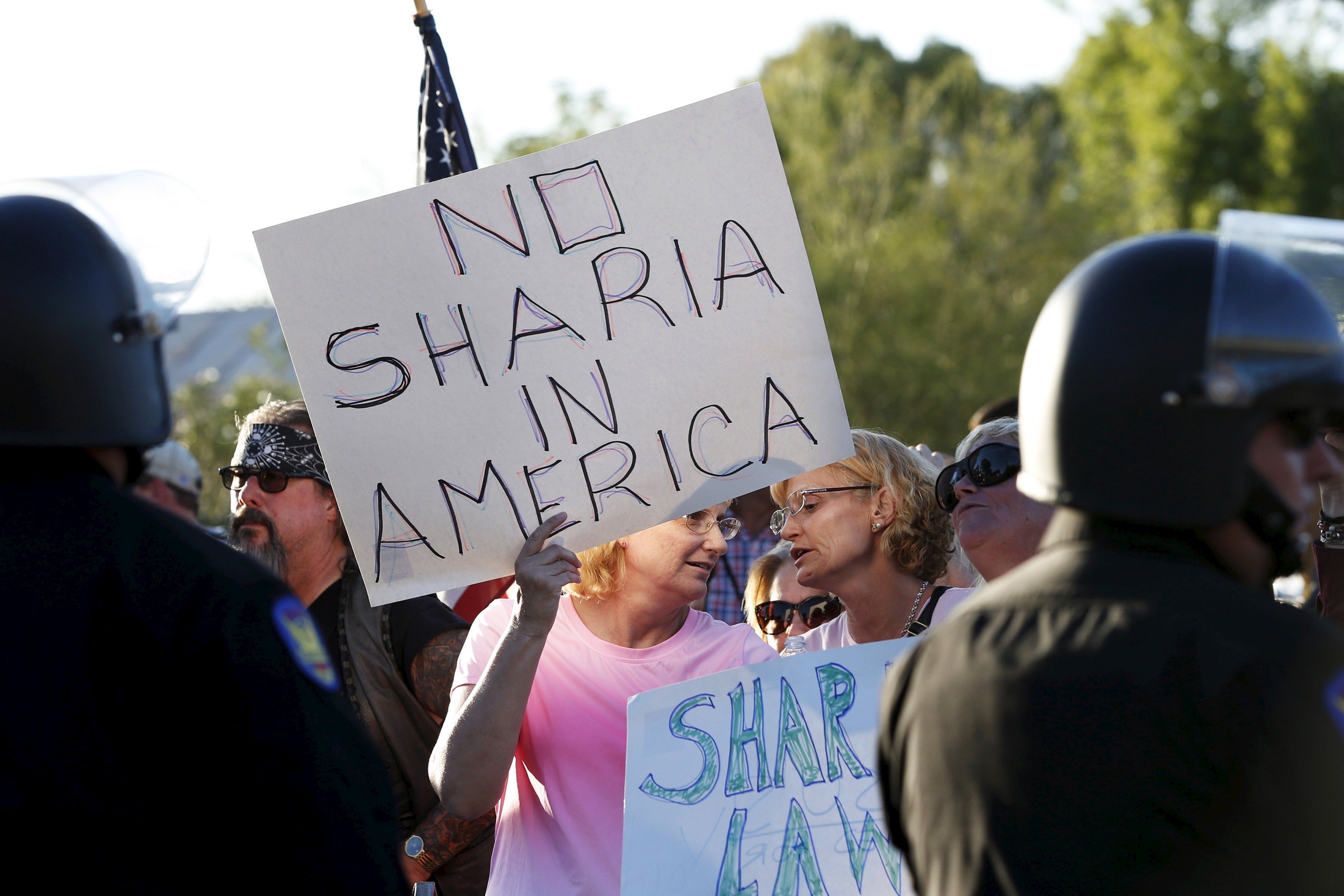 Women attend a “Freedom of Speech Rally Round II” across the street from the Islamic Community Center in Phoenix, Arizona May 29, 2015. More than 200 protesters, some armed, berated Islam and its Prophet Mohammed outside an Arizona mosque on Friday in a provocative protest that was denounced by counterprotesters shouting “Go home, Nazis,” weeks after an anti-Muslim event in Texas came under attack by two gunmen. REUTERS/Nancy Wiechec – RTR4Y3N5

Though Islamic law, or Sharia, does not exist in the United States, eight states (Alabama, North Carolina, Arizona, Kansas, Louisiana, Oklahoma, South Dakota, and Tennessee) have banned it. More than two dozen other states have considered measures to ban it.

National hysteria over the alleged influence of Islamic law in America is a new thing. Most often, those who warn of its existence and influence cite one single New Jersey case, S.D. v. M.J.R, as their proof. In the Spring of 2010, a wife sought a restraining order against her husband on the grounds that he had sexually assaulted her. The judge ruled that because the husband believed that his religion entitled him to sexual relations with his spouse upon demand, there was no criminal intent, and thus no crime.

The ruling was incorrect — incorrect based on state law and based on Sharia — and so later in 2010, the New Jersey Appellate Court reversed the decision.

But 2010 was also the year of the so-called “Ground Zero Mosque,” the controversy in Manhattan over the proposed construction of an Islamic community center. That debate galvanized the public, and set off a number of other mosque protests in states all across the country.

Islamophobia piqued, and anti-Muslim activists had a window of opportunity to push forward with a new narrative: the slow takeover of the American constitution by Muslims who wanted to live in a country that gave preferential treatment to their religion.

Haj Yazdiha, a sociologist at the University of North Carolina at Chapel Hill, investigated the network of individuals pushing for state laws that ban Sharia. Her research, “Law as Movement Strategy: How the Islamophobia Movement Institutionalizes Fear Through Legislation,” recently published in an edition of the Social Movement Studies journal, explores how these groups have strategically managed to use state legislatures to launch widespread campaigns premised on the idea that Islamic law exists in the United States and is a threat.

Yazdiha shows that before these anti-Sharia laws can be planted into state legislatures, the ground must be prepared. This happens, in part, when proponents of the legislation, many of them social activists, spin themselves as “concerned experts,” who worry about the future of our country and, as a result of their heartache over current state of affairs, have a clear vision for a better path forward.

Frank Gaffney, a former Reagan administration official whose voice was among those bemoaning Islamic law in the United States, is an example of how this works. Yazdiha shows how Gaffney vocalized his concern over national security, coupling it with patriotic themes and an ultimate diagnosis: more anti-Sharia laws.

Others, too, take this approach. Daniel Pipes, David Horowitz, and Robert Spencer all describe what they insist is a unique threat — one always posed by Muslims — and wrap their proposed responses to that threat in language that is patriotic and quintessentially American.


Yazdiha writes, “By framing the Islamophobia movement in legal terms, as protecting the Constitution and defending the country, proud patriotic images are positioned in contrast to a dark and looming threat of a sinister, tyrannical terror.”

As this narrative grows and is repeated within political circles, it becomes easier to introduce legislation through key liaisons that are sympathetic to the issue. Thus, as politicians like Newt Gingrich, Michelle Bachmann, and others buy into the idea that Islamic law is a threat, the idea of the threat — even if unreal — grows and begs a response.

The net result is that Islamophobia becomes salient within elite political networks, and its tropes more pronounced in the public conversations.