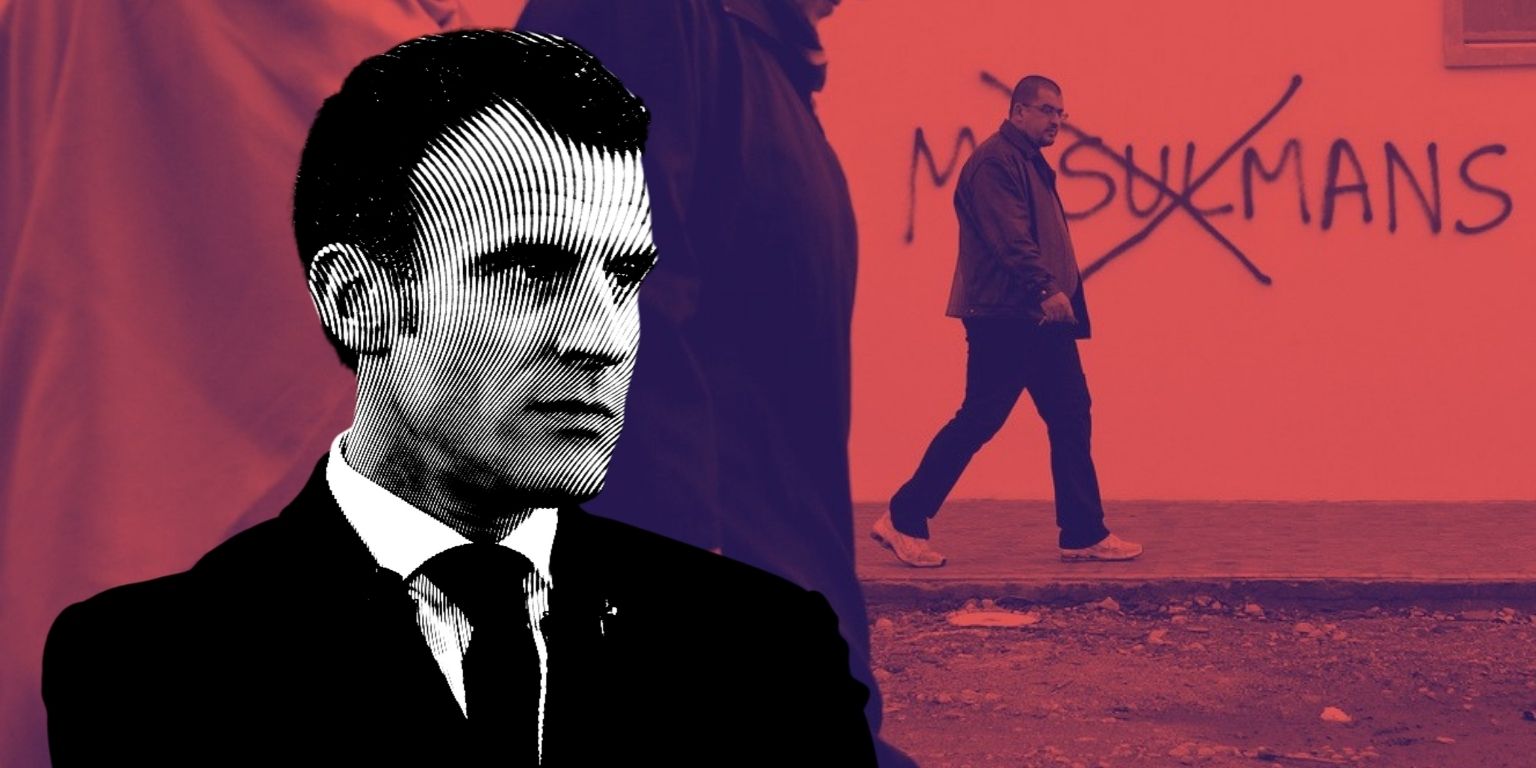 While Macron positions himself as a centrist, he and his government employ the same rhetoric used by the far-right when it comes to Islam and Muslims.
by Mobashra Tazamal
...
Print
Copy Link

Under the banner of protecting the state from “Islamic terrorism,” French authorities launched a crackdown on the country’s nearly six million Muslims. On Monday, October 19th, the government carried out raids targeting Muslim civil society, marking 231 people for deportation, arresting dozens of others, and classifying more than 50 Muslim associations for dissolution.

In response to the brutal murder of Samuel Paty, a secondary-school teacher who was stabbed and reportedly decapitated by 18-year-old Abdullah Anzorov, the French Interior Minister called for swift government measures against “the enemy within,” referring to France’s Muslim community.

One of the organizations the authorities have identified for dissolution is the Collective Against Islamophobia in France (CCIF), an advocacy organization that documents hate crimes against Muslims. The organization has noted rising anti-Muslim sentiment in France and found that in 2019, there were nearly 800 anti-Muslim acts, a 77% increase in two years. In a recent interview, Interior Minister Gérald Darmanin called the organization “an enemy of the republic.”

This is the just the latest in the government’s actions singling out French Muslims, accusing them of supporting “extremism” and “terrorism.” Since January 2020, the government has shut down 73 mosques and Islamic schools, and on October 2nd, French President Emmanuel Macron announced a new law intended to prevent what he called “Islamist separatism” in the country. The measures include giving additional legal powers to local officials to combat ‘“extremism” and placing mosques under greater government control, and requiring the licensing and training of imams to take place in France. Macron announced that the new measures were needed to combat “radical Islamism,” and free Islam in France from “foreign influences.”

For many French Muslims, the fear is that the government is weaponizing the killing of Paty to institute government policy equating Islam to terrorism. Such actions will only continue to marginalize and stigmatize the country’s Muslims, and many are fearful of retaliatory attacks as the media and government play on hypersensitive emotions. The fears were confirmed less than a week after Paty’s murder when two women shouting racial slurs stabbed two Muslim women under the Eiffel Tower.

A standard response to any attack would be for the authorities to carry out an investigation and find the perpetrators and hold them accountable, all while following the rule of law. However, since the killing of Paty, which was carried out by someone who is presumably Muslim, the government’s response has been anything but standard. Time and time again, the French government has held the country’s roughly 6 million Muslims responsible for the actions of one or a few individuals. In a clear example of collective punishment, the authorities are signalling to the wider French society that all French Muslims are somehow responsible for the murder of Paty, simply because they share the same faith as the perpetrator.

Macron had campaigned for his “Islamist separatism” law earlier in the year, claiming government measures were needed to fight against “political Islam.” In a speech delivered in February, the French President alleged that some members of French society were wanting to “separate from the republic,” and thus would no longer respect French laws and threaten the security of others. He consistently alluded to the entire French Muslim community, singling them out as the drivers of this “separatism.”

Speaking with Al Jazeera, French Muslim activist Yasser Louati, stated he believed Macron was “using Islamophobia to power his campaign.” President Macron is nearing the end of his first term as the next election is in 2022, and his first term has been marked by social unrest and economic instability. A June 2020 poll found that Macron’s approval rating stands at 38%.

While Macron positions himself as a centrist, he and his government employ the same rhetoric used by the far-right when it comes to Islam and Muslims. Claims that Muslims are forming a “parallel society” and engaged in a culture war that threatens “European values” and civilization have been a mainstay of far-right politicians and commentators in the country. This far-right discourse has steadily made its way into the mainstream. If there’s one thing the political parties can agree on, it’s the demonization of Islam and Muslims.

Scapegoating Muslims is a tried and tested tactic when it comes to electoral campaigns: it generally pays off. Macron’s intent to tackle “separatism” already has widespread approval as a recent poll found that more 75% of respondents supported the legislation, even though “nearly half worried it might deepen divisions within the country.” Instead of tackling the second wave of COVID-19, the government is busy pointing fingers at the Muslim community, accusing them of failing to “assimilate.” This was exemplified by the Interior Minister’s recent comments expressing shock over halal food sections at grocery stores, instead of focusing on an actual problem: the record 41,622 new cases of the novel coronavirus.

Macron will continue to single out French Muslims and take aim at French Muslim civil society because it’s an easy and electorally lucrative tactic. Instrumentalizing Paty’s horrific murder to justify the state’s repressive measures against the Muslim community will sadly be approved by a large segment of the French public, which has been fed a steady stream of bigoted and dehumanizing views by the government and French media about Muslims. Macron will ride this wave of popular support for what the government has identified as an attack on the Republic, all while alienating and targeting the countries nearly six million Muslim citizens. As leading politicians talk about the need for unity, these illegal policies and actions will only further marginalize French Muslims and create more divisions within French society.