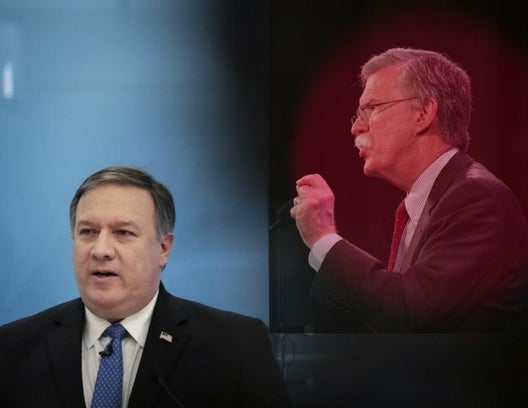 In a week from now, John Bolton will become National Security Advisor of the United States. This is just another pick of an Islamophobe to get a high-ranking influential political position. Meanwhile, Mike Pompeo was just nominated as Secretary of State (confirmation hearings are scheduled to begin this month.) Pompeo is a former right-wing Tea Party congressman, who not only uttered Islamophobic statements, but also accepted an award from one of the most active Islamophobic groups in the United States, which was labeled the “largest anti-Muslim group” in the country by both the Anti-Defamation League and the Southern Poverty Law Center, as the Bridge Initiative’s Senior Research Fellow Arsalan Iftikhar reminds us. According to Iftikhar, Pompeo argued that all Muslims are “potentially complicit” in terrorism. This assertion is not only a single act from a lone person, but reflects a impact of a well-funded network of think tanks, bloggers, authors, and lobbyists that has created websites and spread false narratives about Islam and Muslims on the web into media and popular culture. Both well-known hawks have extensive ties to this organized Islamophobic network (OIN).

John Bolton has appeared on a radio show hosted by one of the most active Islamophobes, Frank Gaffney. Bolton also wrote the foreword of a book by leading Islamophobes Pamela Geller and Robert Spencer, who argued therein that President Barack Obama was part of an Islamist war on America. Gaffney and his Center for Security Policy play a central role in spreading Islamophobic ideology. And it was Bolton who successfully brought Gaffney back into the CPAC after the former was banned in 2011.

Many reports such as those issued by the Center for American Progress and CAIR/UC Berkeley have lain the groundwork to understand this network, especially its financing and its connection to policy makers and the Tea Party. The latest endeavor was made by a research team in the Global Justice Program at the Haas Institute for a Fair and Inclusive Society at UC Berkeley. This report takes a closer look at a specific movement of the OIN, the anti-Sharia movement, which attempts to introduce anti-Muslim bills on Americans and the US legal system with far-reaching impact.

The report, which was drafted by Elsadig Elsheikh, Basima Sisemore and Natalia Ramirez Lee, critically analyses all anti-Muslim legislation and bills introduced between 2010 and 2016 across state legislatures of the nation. This very comprehensive and unique report consists of two three sections: Firstly, it analyzes the means taken by the OIN to capitalize on electoral politics and state legislatures to legalize the othering of Muslims across the United States. Secondly, it presents findings taken from the United States of Islamophobia Database on all anti-Sharia Law bills which were introduced in the fifty US state legislatures from 2000 to 2016. From 2010 to 2016, a total of 194 anti-Sharia bills has been introduced in 39 states. Of these, 18 have been enacted into law, 176 have not been enacted, and one bill has been struck down in Oklahoma. Most of anti-Sharia bills were introduced in the years prior to midterm and presidential election cycles. Hence, these time slots presented windows of opportunity for the OIN to normalize, legitimize and proliferate Islamophobia in the American public as well as in political circles. In the report, the main themes, patterns, trends and impacts of anti-Sharia Law legislation in the US are analyzed. The authors trace the origins of the anti-Sharia bills and reveal the complex networks of the OIN which stand behind these efforts. The report also sheds light on the role of Islamophobia in the era of President Donald Trump and dedicates an entire chapter to federal as well as state measures.

Based on this thorough analysis, the report concludes with numerous recommendations to challenge the legal discrimination against Muslims in the US, which are divided into grassroots, national, and global levels. This report presents more strong evidence-based research on not only the activities of the OIN, but also the far right more broadly, and thus reveals structural problems that endanger democracy in the USA.

With Pompeo and Bolton in the new administration, the OIN would make a crucial step toward the aims of systematically dehumanizing and delegitimizing Muslim life in the USA.

Farid Hafez is a Senior Research Fellow at the Bridge Initiative.

John Bolton was one of the individuals in the George W. Bush Administration who misled the United States about weapons of mass destruction (WMD) in Iraq, and who continues to advocate using force against Iran and North Korea. He has connections with leading anti-Muslim voices and organizations, including Pamela Geller, Robert Spencer, Frank Gaffney and David Horowitz. On March 22, 2018, President Donald Trump nominated Bolton as the next National Security Advisor. read the complete article

On March 13, 2018, President Trump announced that Mike Pompeo (current CIA Director) would replace Rex Tillerson as U.S. Secretary of State. Pompeo has connections with anti-Muslim groups, including Center for Security Policy and ACT for America. Pompeo has stated that Muslim leaders may be complicit in terrorist attacks for not sufficiently condemning them, and as a Member of Congress he co-sponsored legislation to criminalize Muslims and Muslim organizations in the U.S. read the complete article