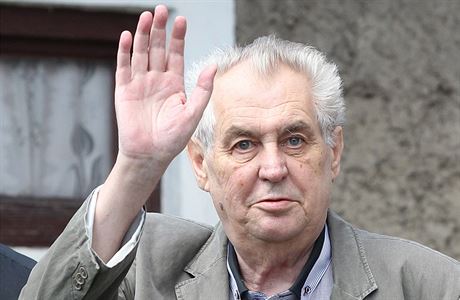 Many observers, especially from the rest of the world, wished for Jiří Drahoš to become the new president of the Czech Republic after the first directly elected president in 2013, Miloš Zeman. Zeman won only in a second round by a thin but decisive margin of 51.5% to 48.5% against his opponent Drahoš. Zeman, who has been part of the social democratic party from Czech’s independence on until he set up his own party, is currently symbolic head of a state without a stable government.

Zeman is known for his anti-EU, anti-immigration and pro-Russia positions. He is an established anti-Muslim commentator spreading endless conspiracies and horrible future scenarios of an ‘Islamized’ Europe. After the war in Syrian and Iraq created masses of refugees, he claimed that the wave of immigrants to Europe were nothing but a planned plot by the Muslim Brotherhood to take control of Europe. He even urged Czechs to take up arms against what he called a “super-Holocaust” from Muslim terrorists. With less than 0.1% Muslims of the country’s whole population and few anti-racist activism, Zeman’s conspiracy theories can be easily disseminated. A meeting by leading European right-wing parties was met with only a few hundred demonstrators. While in the past, Zeman was also countered by government representatives, the new situation could possibly give Zeman new opportunities for blatantly spreading Islamophobia.

Recent parliamentary elections last October gave momentum to a new populist party headed by billionaire tycoon Andrej Babiš, who won with his new party ‘Action of Dissatisfied Citizens’ (ANO) 78 seats. But since he has refused to form a coalition with another right-wing populist party – the SPD – that won 22 seats, which would give him the possibility to form a government in the 200-seat parliament, and other parties have declined to coalise with him because of criminal charges for allegedly obtaining EU funds fraudulently, Babiš resigned. But Zeman had vowed to re-appoint Babiš, whatever the election result. One way could be that Zeman pushes Babiš into an alliance with the ‘Freedom and Direct Democracy Party’ (SPD). The SPD is a right-wing populist party lead by Tomio Okamura and is known for nearly solely focusing on an Islamophobic program.

Also Babiš is known for his Islamophobic positions: “We have to fight for what our ancestors built here. If there will be more Muslims than Belgians in Brussels, that’s their problem. I don’t want that here. They won’t be telling us who should live here.”

But while Babiš is not solely concentrating on this issue, SPD with its 22 seats is following the patterns of Western far right parties. And most important: The SPD supported Zeman, who was flanked by its leader Okamura when he made a triumphant speech. The SPD’s party election slogan was “No to Islam, no to Terrorism” and he even promoted the legal ban of the religion of Islam itself. After the victory in the election last October, Okamura became vice-chair of the Chamber of Deputies of the Parliament of the Czech Republic. And Okamura does not only enjoy the trust of domestic powers such as the Catholic Church, whose Cardinal Dominik Duka congratulated Okamura on his party’s electoral success. Okamura is also well connected to the rest of the far right in Europe.

In Prague, the SPD hosted a meeting of European far right party leaders after its electoral success. Marine Le Pen from the French Front National, Geert Wilders of the Dutch Freedom Party, Matteo Salvini of the Italian Lega Nord, former Ukip MEP Janice Atkinson, Marcus Pretzell, former MEP for the Alternative for Germany (AfD) party and the husband of its former co-leader Frauke Petry. Also, Belgian Vlaams Belang politician Gerolf Annemans, who became president of the far-right fraction in the EU parliament named ‘Europe of Nations and Freedom’s’, was present. While the Austrian Freedom Party could not participate due to ongoing coalition talks on the creation of the new government, which it since occupies, other representatives of the ENF group from Romania and Poland participated.

With Miloš Zeman, the Czech Republic has a president, who cheers for Trump because he doesn’t want to let Muslims in to the United States. A president, who compared himself to a prophet for warning against the radicalization of immigrants. A president, who becomes another brick in a growing puzzle of governing politicians, who openly endorse Islamophobia, push back human rights, and try to stay in power by referring to the ghost of the Muslim enemy.

Farid Hafez is a Senior Research Fellow at the Bridge Initiative.