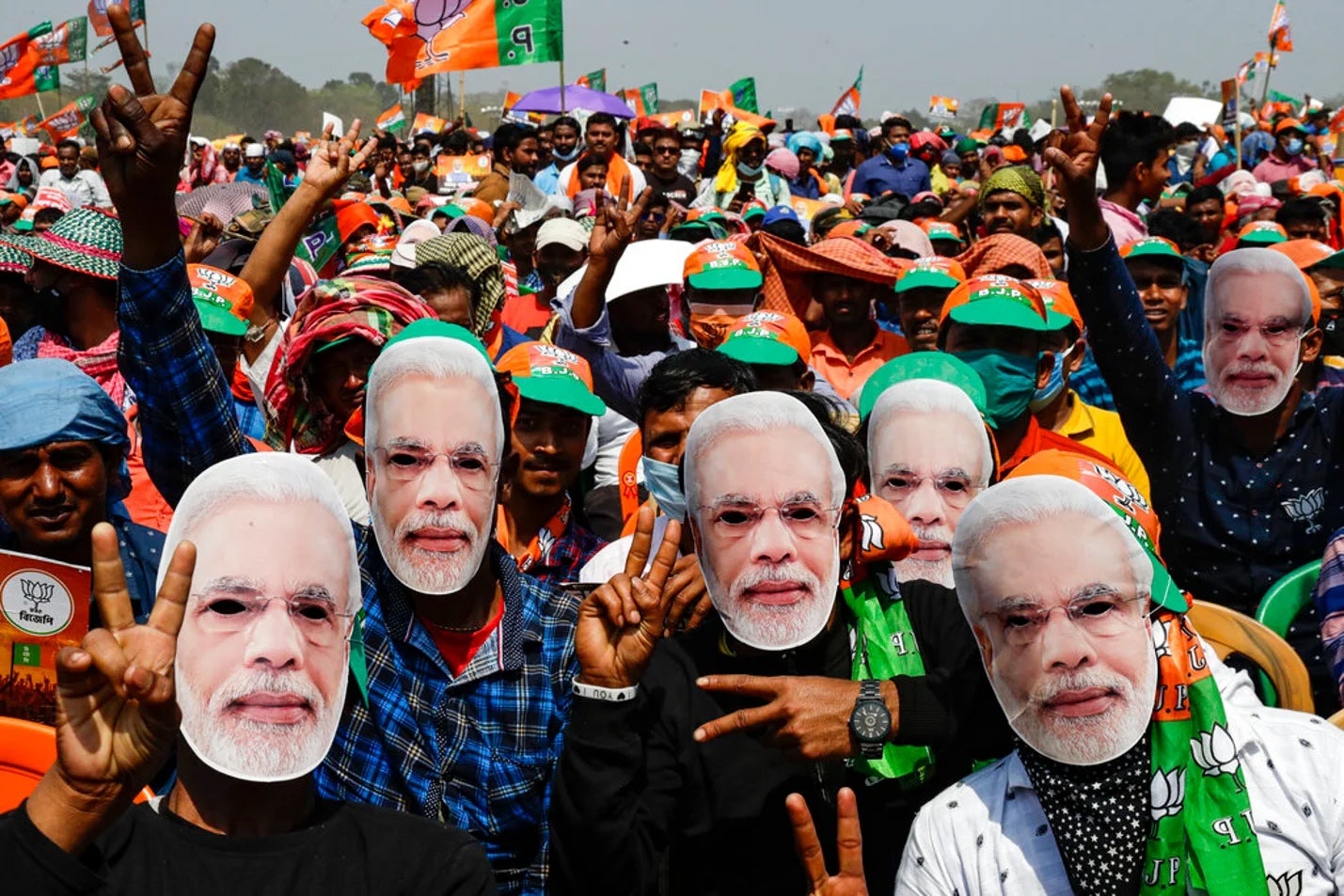 India’s movie industry known as “Bollywood” has cemented itself as the world’s leading film market when it comes to selling seats (2 billion tickets sold annually). Even though India’s most famous Bollywood superstar is a Muslim actor named Shah Rukh Khan (also known by his initials SRK), the diverse birthplace of Mahatma Gandhi has found itself heading down a right-wing ultranationalist rabbit hole led by a proto-fascist prime minister named Narendra Modi who is trying to erase Muslim identity across India today.

Although Bollywood’s song-and-dance formula has always fancied itself as a unifying force in a diverse country of ethnic, religious, and caste divisions; this rightward ultranationalist shift within India under Modi has made Bollywood a new epicenter of Islamophobia. Even though many people will hurry to tell you that some of Bollywood’s most elite famous box-office stars are Muslim themselves (like the aforementioned Shah Rukh Khan, Amir Khan, Salman Khan, etc.), many people around the world are beginning to notice that Bollywood movies are starting to embrace more right-wing meta-narratives aimed at marginalizing and demonizing Muslims on the big screen.

An October 2022 New Yorker article by Indian journalist Samanth Subramanian notes that many of the newer Bollywood movies are starting to match the tastes of right-wing jingoistic Indians with “dubious historical epics that glorify bygone Hindu kings; action films about the Indian Army; political dramas and bio-pics, dutifully skewed” to amplify ultra-nationalist anti-Muslim public sentiment. He further wrote that “these productions all draw from the [Narendra Modi] roster of stock villains: medieval Muslim rulers, Pakistan [India’s Muslim neighbor], Islamist terrorists, leftists, opposition parties like the Indian National Congress. Through Bollywood, India tells itself stories about itself. Many of those stories are now starkly different, in lockstep with the right wing’s bigotry” against minorities across India today.

Many people might be surprised to learn that India is home to the second-largest Muslim population on the planet (194.8 million Muslims and growing). With nearly 200 million Indian Muslims, Islam has now become the second-largest religion inside India. According to the Pew Research Center—by the year 2060—the South Asian regional superpower of India will have over 330,000,000 Muslims which will make it the single largest Muslim population of any country in the world.

In the midst of these numbers, the problem is that India’s Prime Minister is a right-wing ethno-nationalist who has spent the last two decades of his political career trying to erase Muslim identity across India. In 2002, Narendra Modi was serving as chief minister (also known as, governor) of the western Indian state of Gujarat. During his watch as the state’s top government official, Modi stood silently while over 1,000+ innocent Muslims were brutally massacred by pitchfork-carrying anti-Muslim vigilante mobs.

“Large numbers of [Muslim] girls were raped; men were cut to pieces and burned alive with kerosene. Pregnant women had their womb slit open and the fetuses smashed in front of their eyes,” according to Scottish historian William Dalrymple. The 2002 Gujarat anti-Muslim pogroms were carefully planned genocidal attacks of unprecedented savagery targeting 6 million Muslim community. Today, the episode remains a collective trauma for all Muslims in India. In the bloody aftermath of the massacres, some of Modi’s closest political aides were eventually found guilty for their roles in the genocidal horror.

In October 2022- almost exactly 20 years after the Gujarat massacres-  Modi’s ruling Bharatiya Janata Party (BJP) bizarrely approved the premature release of 11 men who were convicted of the gang-raping a pregnant Muslim woman named Bilkis Bano. They were also convicted of  brutally murdering 14 members of her family (including her 3-year-old daughter). The group of men were part of a Hindu vigilante mob that attacked Bano and her family during the 2002 Gujarat massacres simply because they were Muslim. The release of these 11 men- who were serving life sentences for rape and murder- was a direct slap in the face to 200 million Indian Muslims by Modi’s government. Adding to the horror was the heroes welcome the 11 convicted rapists  received, as viral social media videos showed them being given sweets and garlands.

To add insult to injury, many observers were also outraged that the gang rapists were bizarrely set free on August 15, 2022, which is the day India was celebrating its annual independence day and a mere few hours after Narendra Modi had given a high-profile speech asking India’s citizens to respect women. More than 6,000 activists, historians and citizens across India issued a statement urging the Supreme Court to revoke the early release of the 11 men, describing it as a “grave miscarriage of justice”.

For some historical context, Narendra Modi is a proud lifelong member of the Rashtriya Swayamsevak Sangh (RSS) which is a right-wing paramilitary Hindutva nationalist group “inspired by the fascist movements of Europe,” according to Indian essayist, Pankaj Mishra. He also noted that the founder of the RSS also believed that Adolf Hitler and Nazi Germany “had manifested ‘race pride at its highest’ by purging the Jews” during World War II.

Even modern-day terrorists and neo-Nazi white supremacists have hailed India’s ethnonationalist persecution of its Muslim population. According to The Hindu, the 1500-page racist manifesto of anti-Muslim neo-Nazi Anders Breivik (who was responsible for killing 77 people in Norway’s worst terrorist attack ever in 2011) proudly applauded right-wing Hindutva groups who “do not tolerate the current injustice and often riot and attack Muslims when things get out of control.” The white supremacist manifesto also listed the websites of the aforementioned RSS, Modi’s own political party (BJP), and other anti-Muslim groups across India. Finally, the Norwegian terrorist’s manifesto pledged military support “to the nationalists in the Indian civil war and in the deportation of all Muslims from India.”

In the last few years alone, PM Modi’s government has also revoked the statehood of the Muslim-majority population of Kashmir and placed its entire population under a communications blockade and political lockdown for months. Around the same time, the Modi government pushed the controversial Citizenship Amendment Act (CAA), which would strip citizenship from at least 2 million Muslims in the state of Assam alone. One of Modi’s closest political aides-India’s Home Minister Amit Shah- has previously promised to remove Muslim “infiltrators” from India and once described Muslims in overtly genocidal terms as “termites”, who he wanted to throw into the Bay of Bengal.

The complete ideological (and intellectual) opposite of Mahatma Gandhi, the right-winger Narendra Modi is actually accused by many Indians and global observers of trying to establish a Hindu Rashtra (a Hindu-centric political state) where Muslims and other persecuted minorities (including 230 million Christians, lower-caste Dalits [pejoratively known as ‘Untouchables’], etc.) would be relegated to second-class citizenship.

Even during the COVID-19 crisis, the New York Times reported that megaphone loudspeakers at some Hindu temples across India were loudly broadcasting messages telling people not to buy milk from Muslim dairy farmers during the 2020 coronavirus pandemic because they wrongfully said it was infected with COVID-19. In their 2022 report, the U.S. Commission on International Religious Freedom (USCIRF) condemned India as a nation under Narendra Modi’s power for its “systematic, ongoing, and egregious violations of religious freedom” against Muslims and other minorities like Christians, Dalits, etc. Since Narendra Modi ascended to power, there has been a nationwide increase in attacks and lynchings primarily targeting Muslims as well.

Finally, similar to campaigns in Europe where states like France are trying to ban the hijab (headscarf) inside the public square, Muslim women in India’s state of Karnataka have found themselves thrust into a ridiculous nationwide debate over the banning of hijabs in schools. Even though the Karnataka state ban does not extend to other Indian states (yet), the Supreme Court of India issued a split ruling in October 2022 after hearing petitions filed by a group of Muslims against a high court’s judgment in Karnataka. The local state court had refused to stay a government order issued in February 2022 that banned people from wearing clothes that “disturb” equality, integrity and public order in schools and colleges. This debate on banning hijab in educational institutions in the Indian state will continue until India’s Supreme Court finally settles the issue of whether the Muslim headscarf is an essential religious practice in Islam.

“Muslim girls in India are fighting — just like their counterparts in Iran — for their fundamental right to dress and live on their own terms,” wrote prominent Indian Muslim journalist Rana Ayyub. “Many Muslim girls were barred from entering school premises or sitting for exams when they insisted on wearing the hijab, which they believe is a fundamental right. These women believe that the general attack on the hijab is merely a pretext — part of the wider assault on every aspect of the Muslim identity.”

She further highlighted reports of Hindu nationalists brandishing swords and chanting provocative slogans outside Islamic mosques and numerous viral videos showing harrowing mob attacks on Muslims around the country. Many Muslim activists in India have seen their houses summarily demolished by Indian government officials without due process. This overall growth in right-wing Hindutva’s “rising majoritarianism” is causing some Muslims to leave India which is exactly what the sinister Narendra Modi desires and would probably make Mahatma Gandhi cry for his country in his grave.