Skip to content Skip to navigation
Bridge Initiative Research Publications Editorial For Sri Lanka’s Muslims, discrimination even in death
Back 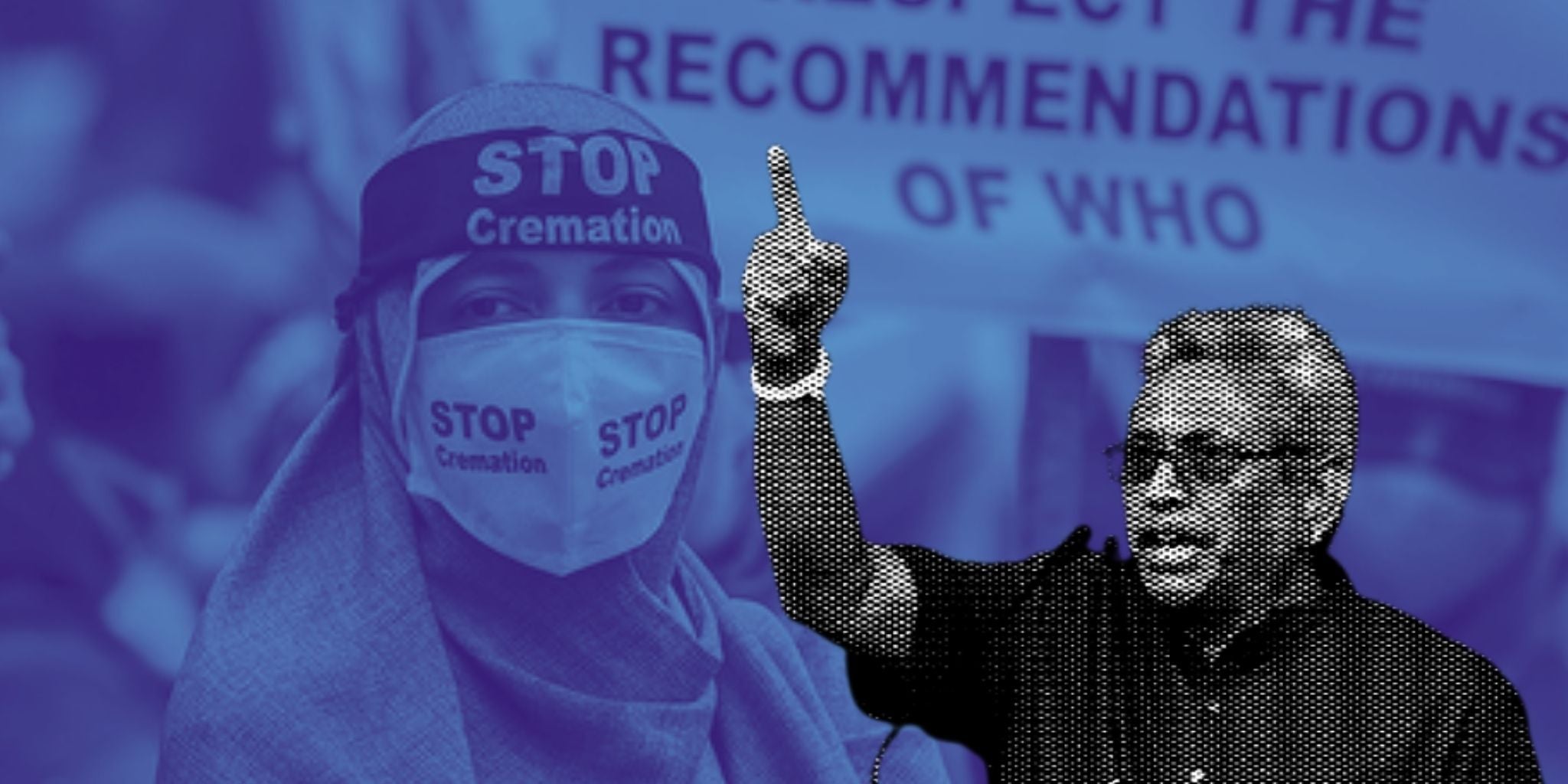 It’s been over a year since the first strain of COVID-19 was discovered in Wuhan, China. Since then, the novel coronavirus has wreaked havoc across the world with over two million individuals losing their lives, and cases topping 100 million.

The pandemic has quite frankly turned life upside down as lockdown measures have been put in place around the globe. Measures of social distancing, mandatory facemasks in public, and staying at home have been issued in an effort to slow the spread of the virus. As we enter 2021, all hopes have been set on a number of vaccines that have begun rolling out, with the hope that life may return to some sense of normalcy.

COVID-19 has often been categorized as a “great equalizer,” as the virus didn’t discriminate between the rich or poor. However, such a description is misguided.  The past year has demonstrated that COVID-19 has exacerbated the existing systemic racism. Data has shown that the virus has disproportionately impacted individuals from Black and minority ethnic populations. Many of the individuals from these marginalized communities are essential workers, live in areas where social distancing is not possible, and have limited to no access to sufficient medical care.

In addition to this, COVID-19 has also amplified conspiracy theories. In India and Sri Lanka, misinformation has been rife and the virus has been used to target Muslim communities in both countries, accusing the minority population of spreading the virus. For both countries, such discriminatory and racist views build upon an already existing environment of Islamophobia, which has been supported and propagated by the authorities. Not only are Muslim communities in India and Sri Lanka having to battle the virus, but they are also doing so in a hostile environment where those in power continue to scapegoat the community for political gains.

In Sri Lanka, this has manifested in a particularly grotesque manner. In a clear violation of individuals’ human rights, the Sri Lankan authorities are forcibly cremating victims, and even suspected victims, of COVID-19. Despite the World Health Organization guidance maintaining that burial of COVID-19 victims is perfectly fine, the government continues to carry out cremations, a practice that is forbidden in Islam. This policy is the latest in the authorities action to scapegoat the community to divert attention from their own failures, as officials have singled out Muslim religious practices as “super spreader events.”

The policy of forced cremations should be examined within the context of state-sponsored Islamophobia, as those in power have nurtured, sustained & facilitated anti-Muslim sentiment and hatred. Shortly before the new year, Sri Lanka’s supreme court threw out the case brought by both Muslim and Christian families whose relatives were cremated in violation of their religious beliefs. Thus far, the government has forcibly cremated over 50 Muslims, including individuals who had not been tested for coronavirus or had even tested negative. One man whose mother’s body was forcibly cremated described his experience stating, “The day my mother died at the hospital, they took her body away and then handed me a pot of her ashes. But the next day they told me that my mother’s test was negative and it was a mistake cremating her. Every night I wake up and think of the mother’s fate.“ The youngest victim was a 20-day old infant.

Sri Lankan Muslims have not only had to deal with the grief of losing a loved one but are having to endure unbearable pain as authorities deny the victims their basic religious right of burial. In a recent online event hosted by the Cordoba Foundation, a number of Sri Lankan human rights and legal experts provided the context needed to understand how such a discriminatory practice has come into place and given the stamp of approval by the authorities.

Dr. Farah Mihlar of the University of Exeter explained how the policy “is not about infection control or public health; it is clearly about racism and human rights violations.” Even prior to COVID-19, there were countless conspiracy theories claiming that growth in the Muslim population along with economic power would lead to an overthrow of the majoritarian Buddhist community. Dr Mihlar pointed out that such conspiracy theories are widespread and adhered to due to organized and systematic campaigns. Additionally, there have been a series of attacks on Muslims neighborhoods and businesses, which were heightened following the deadly Easter Sunday attacks in 2019. In all of these instances, law enforcement did very little to protect Muslims.

Shreen Abdul Saroor, a Sri Lankan Human rights activist, noted that the cremation policy has forced Sri Lankans to look at dead bodies via communal lines. She stated that during this entire episode the media has continued to stoke anti-Muslim sentiment, even showing the cremations, further torturing the grieving families and the wider Muslim community.

What is unprecedented about the current situation is that the cremations are being done via the law and court system. Dr Mihlar detailed how the forced cremation policy is “causing terror [amongst Muslim communities], as they are tormented by the fact that if they die by the virus they will be cremated and know that the state will not protect them.” Despite the UN labelling the government’s actions as a human rights violation, no indication has been made by the government thus far that the authorities will be changing course. The politicization of the pandemic by the Sri Lankan government endangers the lives of the country’s nearly two million Muslims, inflicting even greater trauma on a community that has long suffered from anti-Muslim hatred.