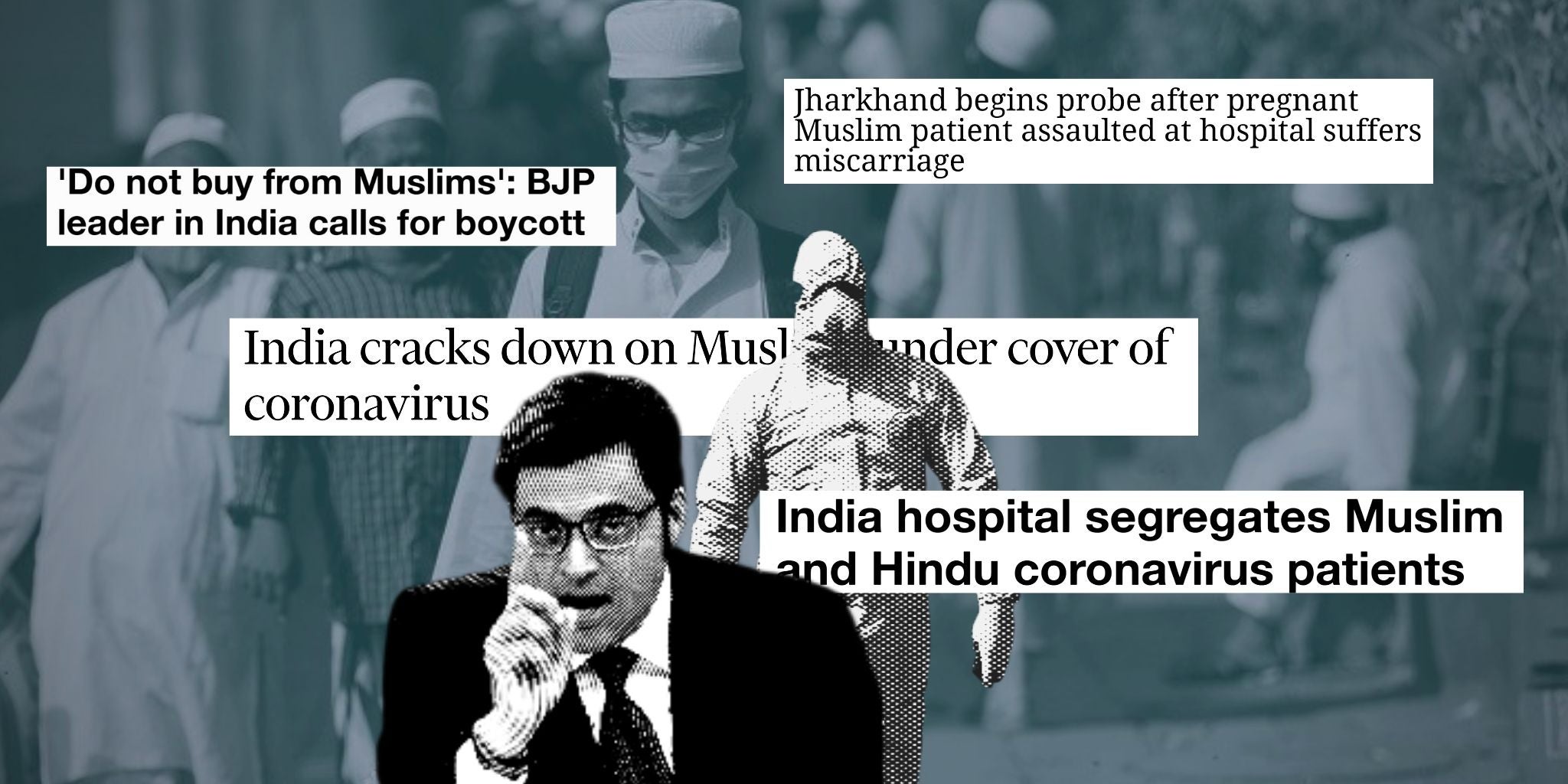 As the world battles COVID-19, Muslims in India are faced with an additional threat: rising Islamophobia. The pandemic in India has brought a spike in anti-Muslim harassment, discrimination, and violence, but the phenomenon is not new. The current atmosphere is an escalation of a trend that has been growing in the country with the ascendancy of the Bharatiya Janata Party (BJP) under the leadership of Prime Minister Narendra Modi.

Since 2014, Modi and his BJP have mainstreamed Islamophobia in India and elevated religious polarization as they aimed to rid all traces of Islam and Muslims in the country, and reformulate India as a Hindu-only nation. In the past few years, government officials from Minister of Home Affairs Amit Shah to Chief Minister of Uttar Pradesh Yogi Adityanath have employed dangerous rhetoric, calling Muslims “termites” and promising to throw them “one by one…into the Bay of Bengal,”and promoting claims of “love jihad” to construct Indian Muslims as a menacing, foreign threat. As a result, there’s been a drastic increase in lynchings, harassment, and discrimination.

To understand the roots of this campaign is to know about BJP’s history. The party is the political wing of the Rashtriya Swayamsevak Sangh (RSS), a right-wing paramilitary Hindu nationalist organization, whose second leader praised Adolf Hitler for “purging” the Jews in an effort “to keep up the purity of the nation and its culture.” RSS’s ideologue V.D. Savarkar, also an admirer of Hitler and endorsed the persecution of Jews by the Nazis, called for an India where both Hindus and Muslims lived but Muslims were in a subordinate position to Hindus, effectively creating a hierarchy of citizenships. In 1939, he compared India’s Muslims to “Jews in Germany,” questioning their loyalty and claiming Muslims were “inclined to identify themselves with Muslims outside India.” Because Muslims in India could not be trusted, Savarkar believed they should be “kept outside the country’s social and administrative fabric.” Savarkar’s book Hindutva: Who is a Hindu? went on to become RSS’s vision for India and is considered the foundational text of Hindu nationalist creed.

Savarkar’s calls to exclude Muslims from Indian society have been implemented by the BJP through policies that aim to redefine Indian citizenship such as the National Register of Citizens (NRC) and the Citizenship Amendment Act (CAA). These efforts cast Indian Muslims as foreigners and aim to exclude them from citizenship.

Concern with illegal immigration, referred to by the BJP as “infiltration,” was a cornerstone of the BJP’s 2019 re-election campaign, with the northern state of Assam becoming the political playground. Assam shares a border with Bangladesh and many Muslims in the state are of Bengali origin but have been living in the state for generations. In 2015, the National Register for Citizens (NRC) was undertaken in the state, with the intention of making it a country-wide initiative, in order to identify legal citizens and deport those deemed illegal. When the citizenship list was published in August 2019, it left out nearly two million people, stripping them of their citizenship, and making them vulnerable to imprisonment and deportation. Soon after, it was revealed that authorities had ordered the building of detention camps to hold those deemed “illegal.” To top off the cruelty, the state employed individuals determined to be “illegal migrants” to build the camps they themselves could be detained in.

The NRC excluded a large number of Hindus, leading the BJP to institute a sister policy, the Citizenship Amendment Act (CAA), which would grant citizenship to Hindus, Buddhists, Sikhs, Jains, and Christians fleeing religious persecution in neighboring countries. Notably, the CAA excludes Muslims directly violating article 14 of the Indian constitution. With this move, India experienced protests across major cities in a monumental show of dissent against Modi, his Hindutva supporters, and the ruling party’s efforts to tear away at India’s secular, democratic constitution.

In the months following the announcement of the CAA, there were numerous incidents of vigilante violence targeting anti-CAA protesters, most notably the assault on students at Jamia Milia University and Jawaharlal Nehru University made headlines. Throughout this series of events, BJP politicians and PM Modi made no efforts to quell the tensions and authorities failed to arrest those responsible, despite having clear evidence identifying the perpetrators. As those in power continue to sanction anti-Muslim discrimination, Hindu nationalist supporters on the ground (and online) have felt empowered.

At the end of February – just before the novel corona virus hit — right-wing Hindu nationalist mobs tore through Muslim neighborhoods in New Delhi, destroying Muslim-owned businesses, burning Muslim homes, and desecrating mosques. The riots occurred after Kapal Mishra, a local BJP politician in the city, issued a fiery speech against anti-CAA protesters taking part in a months-long peaceful sit-in. The speech gave Hindu nationalists the green light to take authority into their own hands, leading to three days of terror in the country’s capital as Indian Muslims were singled out, and police either took part in the violence or silently stood by. The deadly pogroms left at least 53 dead and the country’s Muslims in great fear of their safety in a Modi-led India.

The latest escalation came from news coverage of the mid-March meeting of the Tablighi Jamaat (a transnational Muslim missionary movement) in New Delhi. By the end of the month, hundreds of members of the group had been hospitalized with COVID-19 symptoms and at least 10 had died from the virus. In its reporting of the event, Indian media communalized the virus referring to the meeting as a “Corona Terrorism,” describing Tablighi members as “corona bombs,” “Muslim enemies of Modi,” and accusing them and all Muslims of deliberately spreading the virus. While political cartoons in print media equated Muslims to the virus, marking India’s 182 million Muslims as a deadly contagion, Republic TV’s Arnab Goswami railed against Tablighi members accusing them of “spreading hate against the lockdown.” Goswami went so far as to paint Indian Muslims as anti-national, by claiming the organizers of the group were telling their “followers to do everything possible to defy the lockdown.”

As the media remained hyper-focused on the Jamaat’s meeting, little attention was given to other religious congregations that had taken place at the same time. Uttar Pradesh’s chief minister, for example, went ahead with a religious ceremony on the first day of India’s nationwide lockdown, yet newspapers and t.v. channels chose to paint Muslims as exclusive carriers of the virus, and villains who refused to comply with orders.

BJP leaders weaponized the threat to health to justify targeting Muslims as one leader within the party likened Tablighi members to “human bombs,” while another BJP minister referred to the event as a “Talibani crime.” Meanwhile online, right-wing Hindu nationalist users used the incident to fuel anti-Muslim sentiment, accusing Indian Muslims of engaging in “#coronajihad,” a term created to describe the belief that Muslims were vectors of the virus and engaged in a sinister plot to infect others. Politicians too joined in as members of the BJP used the viral hashtag online, while others harassed Muslim vendors selling vegetables.

The widespread media coverage was coupled with disinformation online and through WhatsApp, alleging Muslims were deliberately spreading COVID-19. Equality Labs, a digital human rights group, found that tweets with the hashtag #CoronaJihad and #biojihad “appeared nearly 300,000 times and have been seen by approximately 165 million people on Twitter.” This religious profiling online by the media and the government sparked abuse against Muslims, economic boycotts of their businesses, and numerous incidents of hate crimes across the country. The fallout has led to discrimination in the health sector as some Indian hospitals segregated patients based on religion, while others refused to admit Muslims altogether, resulting in the deaths of two newborn babies after their mothers were denied admission. The demonization campaign has also affected efforts to tackle the virus as Muslim healthcare and essential workers faced violence and harassment in their efforts to provide for the most vulnerable.

The COVID-19 pandemic has only exacerbated Islamophobia in India as BJP politicians, the media, and social media users accuse Indian Muslims of spreading the virus. On the ground, this demonizing rhetoric is resulting in social ostracisation, economic marginalization, and physical violence for Indian Muslims.