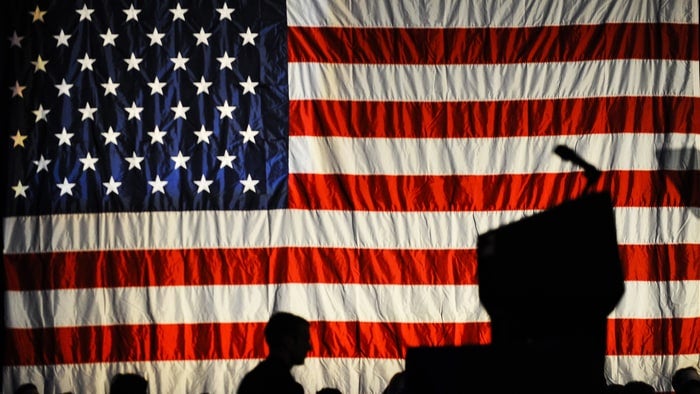 Against the backdrop of an election season characterized by unbridled anti-Muslim rhetoric, and a broader political landscape littered by hostile expressions towards refugees and minorities, Georgetown University’s Bridge Initiative hosted an afternoon panel discussion that brought together celebrated experts to examine the nexus between race, religion, and presidential politics.

The event came just as the U.S. Justice Department announced its concern over persistent and increasing attacks targeting Muslims, Arabs, Sikhs, and South Asian Americans, and assembled a team of attorneys from 11 states to find ways to safeguard minority groups that are so often the targets.

Moderated by Bridge Initiative Project Director John L. Esposito, the diverse group of speakers shared insights that were complementary, and that connected public episodes of discrimination and violence to deep-seated patterns and trends that make those things possible.

Engy Abdelkader, Bridge Initiative Assistant Director, discussed the religious freedom landscape confronting American Muslims and offered a detailed portrait of the 2016 presidential campaign, and the clear relationship between feverish anti-Muslim language and ensuing episodes of physical violence or acts of vandalism directed at Muslims and their property. In November of 2015, she noted, anti-Muslim attacks more than tripled “ a devastating spike that coincided with an uptick in inflammatory rhetoric from GOP frontrunner Donald Trump post Paris attacks.

Importantly, Abdelkader noted, hate crimes and other flagrant attacks aren’t the only problem. Bias-based bullying in schools, religious discrimination in places of public accommodation and employment discrimination are grave concerns too, and often don’t get the attention that more sensational acts of violence do.


“Mosque attacks are symbolic. They suggest that Muslims are not welcome here,” Abdelkader said. “Arguably attacks on Muslim homes, particularly in our country where property rights are so deeply valued, are even more traumatic.”

These acts speak to an underlying animus that communicates to Muslims that they don’t belong while threatening their personal sense of security. And, she added, while religious freedom laws in the United States are intended to protect Muslims and other religious groups from crimes that target them, social hostilities “ religious hostility by individuals, groups or organizations “ often go unchecked. So, while the U.S. Constitution, federal statutes and local laws protect minority rights in theory, religious freedom may be compromised in practice.


“If you’re a child whose mosque has been vandalized with the words, “Death to Islam,’ one anti-Muslim attack is one too many.”

Naureen Shah, a human rights attorney and national security expert, also explored this sense of gripping fear, situating its origin within an intractable machinery of post-9/11 politics that thrives on an everlasting Muslim specter.

“A national sense of crisis has existed over and over again since 9/11, and has propelled a multi-million dollar counter-terrorism bureaucracy,” Shah said.

It’s that bureaucracy, she noted, that has given birth to the Guantanamo Bay prison, and to programs like Countering Violent Extremism (CVE), which locates the germ of terrorism within the Muslim community especially. This apparatus, Shah added, claims to protect the safety and interests of Americans, yet in practice, is a system that is designed to “keep fear alive” by constantly anticipating “ and warning against “ the next big attack. It’s a scenario she called “left of boom.” With a Muslim “monster” clearly defined, it can be targeted and exploited by presidential candidates and policy makers, whose decisions to keep places like Guantanamo open, drop drones on foreign enemies, or ramp up domestic surveillance of American citizens operates on the notion that some lives are more valuable than others.


“I only have to look at my phone to know that Islamophobia exists,” he said.

Tharoor connected the discussion of Islamophobia to three trends that he identified within an international context. The first, he proposed, was the development and crystallization of a European-style populism within American national politics “ something that we’re not used to seeing. Within the GOP, he noted, there has traditionally been more of a balance, but this election cycle, with the rise of figures like Donald Trump, has elicited fiery overtures from people who once rejected the far right but are now embracing it.

The impact of the refugee crisis facing Europe, Tharoor noted, also animates Islamophobia at an international level. Discussing the seriousness and complexity of the issue “ European nations dealing with the practicalities of taking in Syrian refugees “ he reminded the audience of a point that is often lost in the cacophony of voices proclaiming that there is a “crisis.”


“The refugee crisis is a crisis in the Middle East, first,” he said.

And concerns here in the United States about how to deal with it, he added, are sometimes inflated, especially when one considers the detailed and protracted security process involved in taking in those fleeing foreign violence and chaos.

Lastly, Tharoor discussed the ways in which the effects of attacks in places like Brussels and Paris play out at home and abroad. These events, and others like them, have a tendency to fuel the “clash of civilizations” narrative, Tharoor said, causing some to muse over the supposed “incompatibility” between Islam on the one hand, and the West on the other. He cited a recent Freedom House report which suggested that anti-Muslim narratives “ that Europe is facing a “Muslim invasion” as a result of the refugee crisis, for example “ threatens democracy as some politicians exploit the crisis to boost their populist appeal.

Despite the ominous subject-matter, the panelists offered hopeful messages of pluralism and cooperation as the event ended.

Tharoor said that despite being inundated with offensive anti-Muslim Tweets in response to his publications, he also received positive letters from American Jews whose families came to the United States, each affirming their commitment to end prejudice, saying: “We can’t ever let this happen again.”

Shah struck a similar tone of intersectionality and teamwork. To realize progress, she said, we have to “mobilize human rights supporters and make anti-Muslim hate something that is on the agenda of every major human rights group.”

“Prejudice, discrimination, bigotry “ these things are not Muslim issues only,” Abdelkader said. “Only by coming together will we overcome.”