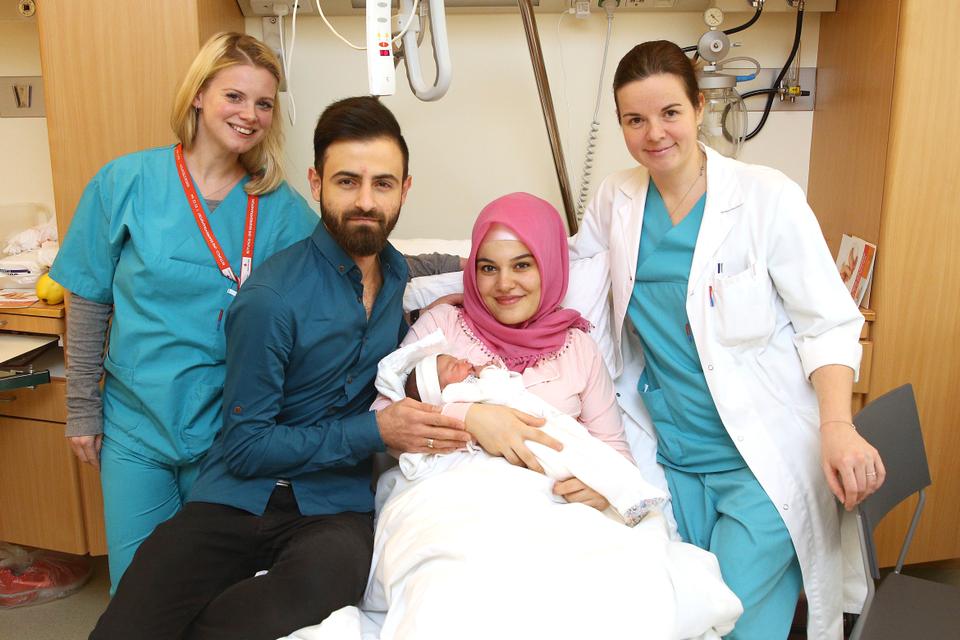 Asel Tamga (pictured here with her parents) became the first baby born in Austria in 2018. Shortly after this picture was published, social media was flooded with thousands of hateful, racist and abusive comments. (KAV/Votava)

Vienna’s “New Year’s Baby” made it to the international edition of the New York Times, something that doesn’t happen every year. The reason, far from festive, was the wave of hatred sweeping Austrian online media after a picture showing a young Muslim family celebrating the birth of their newborn daughter, Asel, was published in Austria’s tabloid newspaper Today, an annual tradition.

Reactions to the photograph revealed the dark underbelly of a significant element within Austrian society. Online captions demonising the newborn were hard to fathom: “Next terrorist is born” and “With this tatter (referring to the hijab of the mother) on her head this old woman must stink like a wet badger – disgusting” were some of the racist slurs, referring to the proud mother wearing a headscarf. “I’m hoping for a crib death” and “Deport the scum immediately” read two other postings.

These posts reveal a growing normalisation and tendency in Austrian society towards dehumanising the “Muslim other.” It stands at the heart of any form of racism to rationalise the exclusion, exploitation or even the annihilation of the other, as happened with the Jews during the Holocaust.

This is a dangerous indication that shows us that the deep patterns of racist thought are predominant today, as they have been in Austria’s past.

Similar to the growing trend in many other Western countries, where racist politicians have climbed to the highest offices of power, this also allows and even compels the rest of society to react.

After Klaus Schwertner, from Vienna’s chapter of the Roman Catholic Church, reacted with a hashtag campaign #flowerrain, not only the new opposition leader of the Social Democratic Party, but also the Federal President of the Austrian Republic President Van der Bellen followed suit. He wrote: “All human beings are born free and equal in dignity and rights.”

“Confidence and cohesion are greater than hatred and hate. Welcome, dear Asel!” he said, addressing the newborn.

This was another example of the positive sentiments expressed by the federal president, who was the long-time chairman of the more leftist Green Alternative party, where he found clear words to challenge these blatant expressions of racism.

But while the newly elected Chancellor Sebastian Kurz of the People’s Party did not react at all, the vice-chancellor of the right-wing populist Freedom Party (FPO), Heinz-Christian Strache, is known to have posted in the past that Muhammad was already the third most popular name for male newborns in Vienna – which he called an “abortive politics” of the former political establishment.

Drawing this map of reactions demonstrates the divide in Austrian society that runs along the claim of equality vs. dehumanisation of “the other.”

When the new Minister of the Interior Herbert Kickl (FPÖ), recently argued that he wanted “services centres and infrastructure to allow the authorities to concentrate asylum seekers in one place,” there was an immediate reaction criticising his choice of words, linking it to the history of concentration camps during the Nazi regime.

But let’s assume the best – that Mr. Kickl did not use these words intentionally to provoke. Even in that case, this statement reveals a deep underlying issue: It shows us that there is little to no consciousness of Austrian history and more specifically of the annihilation of 11 million people and 6 million Jews in the Holocaust as a central moment in the atrocities of the Nazi regime.

Today, anti-Semitism is even a taboo for the official FPO, which was originally born as a party for former Nazis. But even beyond the FPO, anti-Semitism is portrayed as sui generis, disconnected from older as well as contemporary forms of racism.

Yale Law School Professor James Q Whitman has recently shown in ‘Hitler’s America’ (Princeton University Press), how much Hitler’s anti-Semitic laws drew on the race laws of the United States at that time, hence arguing for a more comprehensive picture of racism in our global world order.