Skip to content Skip to navigation
Bridge Initiative Research Publications Editorial 20 years of Guantánamo: a symbol of injustice, abuse, and disregard for the rule of law
Back 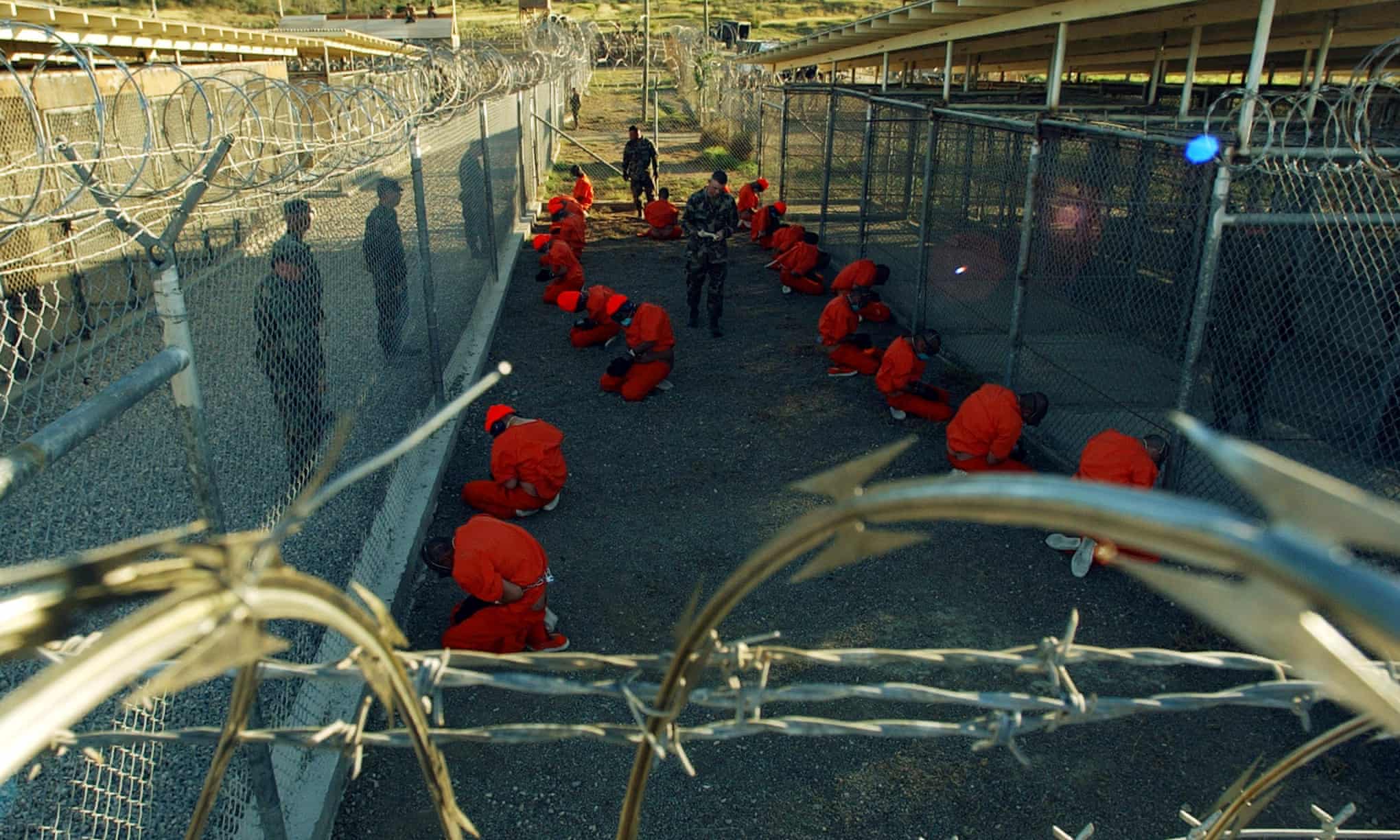 On January 11, 2002, the first individuals arrived at the Guantánamo Bay Military Prison. In the twenty years since the establishment of the prison, a total of 780 Muslim men and boys have passed through the prison, with 98% never being charged with a crime. In the two decades since its founding, only two prisoners have ever been convicted. The legacy of this site has been one of torture, abuse, widespread violations of international and human rights law, and Islamophobia .

The naval base at Guantánamo was chosen by the Bush administration due to its location, as it existed outside of the United States and therefore detainees would not have access to protections under U.S. law. The administration created a new category, “enemy combatants,” to deny the individuals protections guaranteed under the Geneva Conventions. When it came to the legal rights of these individuals, the Bush administration tasked lawyers with finding “the legal equivalent of outer space,” beyond the reach of the U.S. judicial system.

The prison at Guantánamo exemplifies the excesses  of the war on terror:  torture, violation of international and human rights law, secrecy, dehumanization, violence, racism, and Islamophobia. It also embodies the global aspect of the international campaign; the site has imprisoned men from over 49 countries, with 450 of them coming from just three countries: Afghanistan, Saudi Arabia, and Yemen. Many of these individuals had previously been held in blacksites around the globe as part of the CIA’s extraordinary rendition program. A 2013 report from the Open Society Justice initiative found that 54 countries including Germany, Italy, Spain, the United Kingdom, Poland,  Egypt, Syria, the United Arab Emirates, Yemen, and Jordan collaborated with the CIA in this program. The Cost of War Project further found that at least 113 individuals were subjected to the CIA’s rendition (a program where the CIA covertly sent individuals suspected of terrorism to be interrogated in a country with less regulations for the humane treatment of prisoners, detention, and interrogation program.

The Guantánamo military prison has been described by experts, states and former detainees as a “concentration camp.” It has been the site of widespread abuses, as documented in the U.S. Senate intelligence report, which found that “interrogations of CIA detainees were brutal and far worse than the CIA represented to policymakers and others.” In addition to the widespread knowledge surrounding the use of waterboarding, the report also found U.S. authorities used Water Dousing, Rectal Rehydration (rape), Sleep Deprivation, Walling, Stress Positions/Shackling,Threats, Sensory Deprivation/Solitary Confinement, and Nudity. Abu Zubaydah, whom U.S. authorities arrested in 2002, was the CIA’s test pilot when it came to the torture techniques designed by two American psychologist contracted out by the U.S. government. While some of the CIA recordings of Abu Zubaydah’s torture were destroyed under the watch of  Gina Haspel (who would go on to lead the agency under the Trump administration), Abu Zubaydah drew vivid illustrations of his inhumane treatment at the hands of U.S. authorities. Despite the mounting evidence and the widespread knowledge of the use of torture, no one has been held accountable. Most recently in a landmark case, the government of Lithuania agreed to “pay more than $110,000 to Abu Zubaydah, the Guantánamo detainee known as the ‘forever prisoner,’ in compensation for having allowed the CIA to hold him at a secret site outside Vilnius where he was subjected to forms of torture.” Abu Zubaydah remains imprisoned under an indefinite law of war detention along with 13 others who’ve never been charged with a crime. In 2017, the UN Special Rapporteur on Torture noted that, “By failing to prosecute the crime of torture in CIA custody, the US is in clear violation of the Convention against Torture and is sending a dangerous message of complacency and impunity to officials in the US and around the world.”

Lawyers and legal experts have called the prison a “legal blackhole.” The Bush administration established the military commissions to try those detainees charged with crimes. However, in the two decades of its existence, the commissions have been marred by scandal, a rotating crew of judges and lawyers who’ve retired or resigned, with the vast majority of cases still in pre-trial stages. Many of the issues lie around the admissibility of evidence gained through torture.

The stain of Guantánamo also lives beyond the walls of the prison. Those who’ve been released are forced to live with the stigma, surveillance, and fear that comes with having been associated with the prison. Additionally, not all of the men who’ve been released were sent back to their country of origin. A Bridge Initiative data project found that over 20 percent of the men were repatriated to third countries, such as Albania and Serbia, where the individuals were dropped into a country with a vastly different culture, language, and no family support. In January 2022, the human rights organization Reprieve released new data demonstrating that about 30 percent of former Guantanamo prisoners who have been sent to third countries are lacking legal status, making it “impossible for them to work or travel, leaving them vulnerable to deportation and restricting their ability to rebuild their lives.”

Mansoor Adayfi, a Yemeni man sent to Serbia in 2016, is a human rights activist and published author, who has described his life after release as “Guantánamo 2.0.” As a result of the complete abandonment and the legal cloud surrounding the resettlement agreements, some prisoners have even died such as Tunisian prisoner Lutfi bin Ali, who was released to Kazakhstan in December 2014 following 12 years of imprisonment without charge. Lutfi Bin Ali not only experienced daily struggles of isolation and constant surveillance, but was denied adequate medical care, ultimately leading to his death. Authorities denied him travel authorization (something experienced by many former detainees) to Tunisia for medical care, and he ultimately died in Mauritania in 2021 without ever returning to his home country or seeing his family. In a situation that could be seen as an opportunity to somewhat right the wrongs that had been committed, the government has essentially disposed of the prisoners.

Guantánamo is a feature of the war on terror: a living memorial to the global violence unleashed by the US government in retaliation for the 9/11 attacks. It is a legal anomaly, designed to function outside the rule of law. It has been able to exist in  large part due to Islamophobia that has resulted in the dehumanization of Muslims. Torture, both psychological and physical, is rooted in the foundations of the prison. The impact of Guantánamo goes beyond the prisoners as hundreds of families, friends, towns, and villages have felt the reverberations of the atrocities that have happened at the U.S.-controlled enclave. Guantánamo remains an “enduring symbol of the injustice, abuse, and disregard for the rule of law that the U.S. unleashed in response to the 9/11 attacks.” Thirty-nine Muslim men remain with 27 who have never been charged with crime. It has been twenty years of this illegal and inhumane project that has stolen the lives of hundreds of Muslims.

Introduction The Guantánamo Bay Data Project serves as a central source of information on the Guantánamo Bay Military Prison. This project provides a comprehensive picture of the prison, centering the lives of the boys and... read the complete article

IMPACT: A majority of those imprisoned at the Guantánamo Bay Detention Camp were subjected to various forms of physical and psychological abuse—techniques that were developed by two American psychologists contracted by the CIA to develop... read the complete article

IMPACT: Guantánamo Bay military prison is a site of egregious and ongoing human rights violations perpetrated by the United States government. Opened in early 2002 on a U.S. naval base in Cuba, the prison has... read the complete article