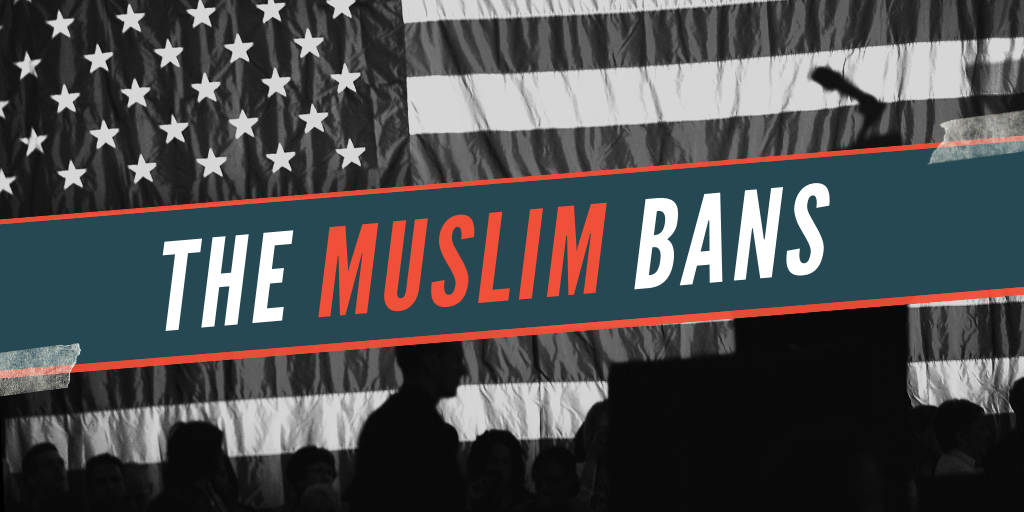 The opening paragraphs of the executive order make it clear that this was a ban on Muslims. The terrorist attacks of September 11, 2001 were cited as the historical backdrop, and EO13796 vaguely referenced conspiracy theories about ‘sharia law’: “The United States cannot, and should not, admit those who do not support the Constitution, or those who would place violent ideologies over American law.”

The intent of the Muslim Ban has always been discriminatory. The first Muslim Ban (before the end of 2017 there would be four iterations) delivered on Trump’s December 2015 campaign promise for the “total and complete shutdown of Muslims entering the United States.” It is important to note that in his speech, Trump cited a poll commissioned by the anti-Muslim organization Center for Security Policy. Past Bridge Initiative research has demonstrated that this poll was methodologically flawed and reported inflammatory and dubious findings about Muslims in the U.S.

Despite Trump’s long history of animus against Islam and Muslims, on June 26, 2018 the U.S. Supreme Court ruled 5-4 that the Muslim Ban did not violate the First Amendment of the U.S. Constitution, nor did it exceed the president’s authority under the Immigration and Nationality Act to "impose on the entry of" or "suspend the entry of" a "class" of people. In so doing, the Supreme Court deferred to the executive branch under the long-standing plenary power doctrine.

In her dissenting opinion, Justice Sonia Sotomayor quoted President Trump's own words against him:

Islam hates us. We’re having problems with Muslims coming into the country. - Donald Trump, March 9, 2016

On Dec. 21, 2016, President-elect Trump was asked whether he would rethink his previous ‘plans to create a Muslim registry or ban Muslim immigration,’ He replied: ‘You know my plans. All along, I’ve proven to be right.'

By blindly accepting the government’s misguided invitation to sanction a discriminatory policy motivated by animosity toward a disfavored group, all in the name of a superficial claim of national security, the court redeploys the same dangerous logic underlying Korematsu and merely replaces one grave wrong  decision with another.

While the Muslim Ban had been in full effect since a Supreme Court ruling on December 4, 2017, it was now in effect “legally” and indefinitely. In what came to be one of the deciding factors for the Justices, the third iteration of the Muslim Ban (Presidential Proclamation 9645) formalized a process whereby applicants who were denied visas—or whose visas had been revoked—could apply for a waiver to travel or immigrate to the U.S.

One year out from the June 2018 Supreme Court decision, how has this waiver process functioned? How many applicants who are eligible according to PP 9645 guidance have been issued waivers to enter the U.S.? Have waivers been issued in a timely and transparent manner? What are the impacts of the waiver process on applicants and their loved ones?

From refugee admissions to fiancée and student visas, the Muslim Ban continues to have a devastating impact on nationals from Muslim majority countries Iran, Libya, Somalia, Syria, and Yemen, and on their families—many of whom are U.S. citizens and greencard holders. Due to their indefinite separation, some parents have never met their children. Some have postponed their weddings, some are prevented from starting a family, and some have died waiting.

Of all refugees resettled in the U.S between Fiscal Years 2016 and 2018, the State Department reports a decrease of Muslims resettled by:

Despite the June 2018 Supreme Court decision that determined that the Muslim Ban was constitutional and did not exceed presidential power under the Immigration and Nationality Act—due largely to the waiver process—the numbers indicate that the waiver process isn’t much of a process at all. Former consular official Christopher Richardson stated in a sworn affidavit that “there really is no waiver [process].” Another consular official stated that the “waiver process is a fraud.” Moreover, there is no clear guidance provided by the White House, State Department, or the Department of Homeland Security detailing how, when, and by whom the visa waivers are adjudicated.

The Bridge Initiative Database: Impact of the Waivers

The latest data released by the State Department indicate that only 5.1% of all applicants for a visa waiver have been issued a visa. Since December 2017, when Presidential Proclamation 9645 went into full effect, there have been 36,784 applications for non-immigrant visas and 23,492 applications for immigrant visas that are subject to restrictions by PP 9645. This brings the total applications for entry to the U.S. by those subject to the Muslim Ban to 60,275. With 5.1% of applicants having been issued a waiver, this means that only 3,074 of the 60,275 applicants have been issued a visa waiver to enter the U.S.  between December 2017 and March 2019. As stated by Senator Chris Van Hollen in a corresponding press release, the Muslim Ban “was bad on day one and is only getting worse.” Moreover, he continued, “this data makes it abundantly clear that the waiver process is a sham and that the ban has nothing to do with national security.”

The database the Bridge Initiative has compiled is merely a snapshot of this stark reality, yet it attempts to demonstrate the deep human costs of the Muslim Ban. For instance, how many babies have been born while their parents remain separated? How many applicants or their loved ones have put their education on hold, or whose jobs or careers are threatened as a result of the Muslim Ban? How many applicants and their loved ones have reported that they are experiencing anxiety, depression, or emotional distress as a result of the Muslim Ban?

With these questions in mind, the Bridge Initiative has aggregated data on immigrant and non-immigrant visa applications and their impacted families who have been subjected to the restrictions of the current Muslim Ban. This data was compiled from online news media, lawsuits, and the in-it #StopTheBan video platform. Through an analysis of this data, which is comprised of 549 entries, we identified the following:

Out of 549 entries within the database:

or 1 in 4 were children who were separated from parents

As a result of these examples of family separation, at least 16 babies have been born while loved ones (parents, grandparents, siblings) await adjudication on a visa or waiver; 24 individuals have delayed starting a family and having children of their own; 13 individuals missed or may miss a loved one’s funeral or the chance to say goodbye to a loved one; and 13 individuals have either been forced to cancel, postpone, or miss a wedding. In addition, the separation of families has had a toll on the mental health of those impacted:

or 1 in 10 of all cases of individuals who explicitly reported experiencing anxiety, depression, and/or emotional distress as a result of the Muslim Ban

Despite the claims of the Administration, the waiver process is neither transparent nor timely. Out of 248 applicants for visa or waivers in the database, 82 applicants are currently experiencing at least two years of wait time since their initial visa application and/or their initial visa interview. That is:

The unpredictable and protracted wait time of the waiver process exacerbates the hardships that many of the applicants and their families are currently experiencing. Thirty-seven (37) individuals are facing dangerous safety conditions and/or threats as a result of the precarity in which the Muslim Ban suspends them. This represents 6.7% of all individuals listed in the database. Of these 37 cases, 27 are living in or are at risk of being returned to a conflict area. This includes eight children under the age of 18. These 27 cases represent 3 in 4 of the applicants experiencing precarious safety conditions as a result of the Muslim Ban.

It bears reminding, as some have pointed out, that the U.S. has intervened, militarily or otherwise, in the Muslim-majority countries listed on Muslim Bans 1.0 to 3.0, whether currently and/or in the very recent past. This calls into question the role of the U.S. in directly creating, or facilitating the conditions that have led to violence and political instability in these countries. It is also calls into question the decision of the Trump Administration to ban them from entering the U.S.

Additional analysis from the dataset, as well as in-depth analysis of the impact of the Muslim Bans by country can be accessed at the resources below:

Database Analysis
By the Numbers

The methodology can be accessed here